Please ensure Javascript is enabled for purposes of website accessibility
Log In Help Join The Motley Fool
Free Article Join Over 1 Million Premium Members And Get More In-Depth Stock Guidance and Research
By Zhiyuan Sun - Feb 19, 2021 at 6:25AM

Large biotechs are taking over small-cap companies (and their cancer treatments) left and right. Could this business be the next target?

Over the past year, TG Therapeutics (TGTX 1.48%) has been one of the top-performing cancer treatment stocks, with a stunning return of 190% as of Feb. 18. That's wild considering the industry benchmark iShares NASDAQ Biotechnology ETF (IBB 0.69%) returned just 37% over the same period.

As it turns out, TG Therapeutics is still significantly undervalued, even after its 2020 rally. Could larger companies be eyeing TG Therapeutics for its acquisition potential? Let's look at what the company has to offer in its efforts to combat cancer. 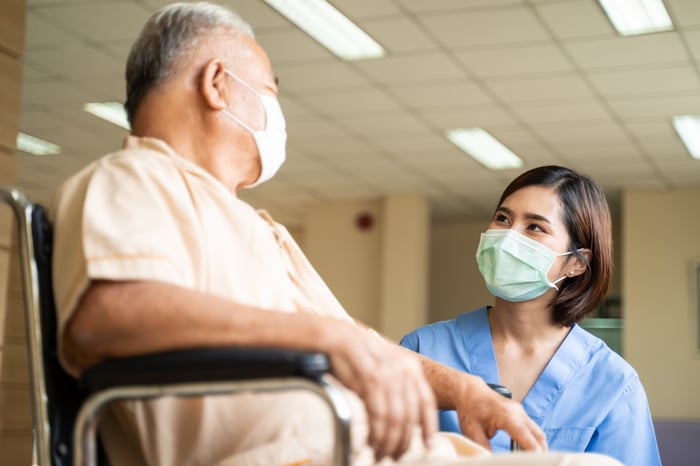 A new treatment for lymphoma

An overall response is defined as either the complete eradication of tumor activity (complete response) or a reduction of at least 30% in tumor diameter after treatment (partial response). About 4% of patients with FL and 11% of patients with MZL developed complete responses after taking the drug. Overall, Ukoniq had low-level toxicities. About 14% of participants discontinued the treatment due to serious adverse events such as colitis and low blood cell count.

While that may sound risky, keep in mind that the drug's rewards significantly outmatch its side effects. Patients with MZL who entered trials had failed at least one prior therapy, whereas patients with FL had failed three previous treatments before taking Ukoniq. In addition to that, all patients had refractory or relapsing lymphoma, so it is notable that they experienced any benefit at all. There are an estimated 8,000 to 10,000 patients receiving treatment for both conditions in the U.S. each year.

Ukoniq isn't the only promising treatment TG Therapeutics has in its portfolio. Right now, it is developing Ukoniq in conjunction with ublituximab (the combination is called U2) to treat patients with chronic lymphocytic leukemia (CLL). During a pivotal phase 3 study, the combination therapy improved the median progression-free survival rate of CLL patients to 31.9 months. The benchmark was standard of care treatments involving chemotherapy and immunotherapy, which only prolonged patients' median progression-free survival to 17.9 months.

The difference was highly statistically significant. As a result, the trial was stopped by an independent data committee for outstanding efficacy and is being rushed to market to save lives. TG Therapeutics plans to file a Biologics License Application (BLA) with the FDA in the first half of this year. There are about 185,000 Americans living with CLL, and only 40,000 seek treatment annually due to the lack of quality therapies. By 2025, CLL treatments' global sales will likely reach $10 billion, growing at 15% annually.

If that isn't enough, TG Therapeutics is also testing ublituximab for treating multiple sclerosis (MS). In a phase 3 study, patients who took ublituximab had a 50% to 60% relative reduction of MS relapses than a leading treatment. More than 1 million people are living with MS in the U.S. 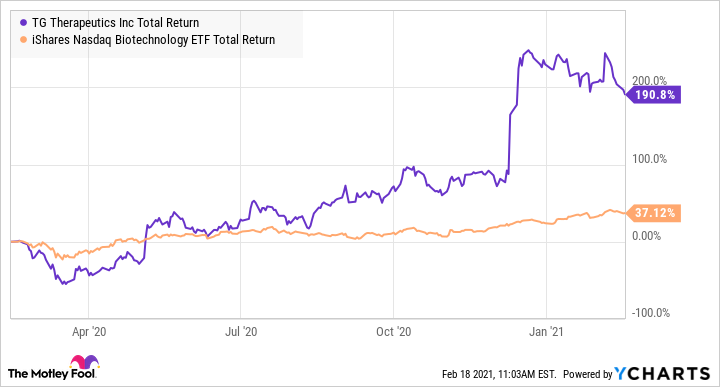 Right now, TG Therapeutics has about $254 million in cash and just $15 million in debt. It also has an operating loss per quarter of $85.7 million. Compared to its potential to produce several blockbuster drugs, the company's financial situation shouldn't pose a problem to potential acquirers.

At the moment, biotech mavericks that successfully bring just one cancer drug market can become acquisition targets in deals worth as much as $10 billion to $21 billion. TG Therapeutics definitely has that potential, and is looking rather undervalued at $6.6 billion. In addition, multiple blockbuster drugs coexist in the MS market, which could grow to $28 billion by 2025.

Each year, about $100 billion to $200 billion worth of M&A deals take place in the biotech sector, and it is very possible that TG Therapeutics would contribute to that amount this year. For the potential that Ukoniq and ublituximab bring to the table, this is one hot biotech that you will not want to miss out on.