Please ensure Javascript is enabled for purposes of website accessibility
Log In Help Join The Motley Fool
Free Article Join Over 1 Million Premium Members And Get More In-Depth Stock Guidance and Research
By Howard Smith - Feb 24, 2021 at 8:27AM

There are several ways for investors to participate in the accelerating growth in renewable energy.

The energy industry had a tumultuous year in 2020. The pandemic led to lower global energy demand as policies to stem the spread of COVID-19 restricted travel and throttled economies. But it also highlighted the growing role renewable energy will play in the future.

Relative to 2019, energy demand in 2020 declined for all forms of generating capacity except renewables. Coal, gas, nuclear, and oil demand decreased between 3% and 9%, while demand for renewables actually ticked up by almost 1%, according to the International Energy Agency (IEA). Investors can benefit by looking into owners and operators of renewable generation capacity like Brookfield Renewable Partners (BEP 2.94%), NextEra Energy Partners (NEP 1.22%), or Atlantica Sustainable Infrastructure (AY 1.73%). There should also be significant growth in solar and hydrogen power, where companies including Enphase Energy (ENPH -1.14%) and Plug Power (PLUG 2.02%) participate.

Wind and solar generation grew more than any other renewable source in 2019, with solar growing 22% globally, according to the IEA. The independent agency believes solar is on track to average 15% annual growth through 2030. Wind capacity additions grew 8% in 2020 despite the COVID-19 pandemic disruptions, and its uptake is expected to accelerate in 2021.

Atlantica Sustainable, Brookfield Renewable, and NextEra Energy Partners own and operate portfolios of renewable energy generating assets. Brookfield's portfolio contains over 5,300 power-generating facilities consisting of hydroelectric, solar, and wind power. NextEra Energy Partners acquires, manages, and owns contracted clean energy projects with stable, long-term cash flows. It expects 12% to 15% growth per year in its distribution off of 2019's fourth-quarter base, through at least 2024.

Atlantica also has increased its dividend by 35.5% over the last three years. And investors can still buy into this growing renewable energy company at a discount to its peers. Measuring enterprise value against either EBITDA or revenue shows the valuation comparison. 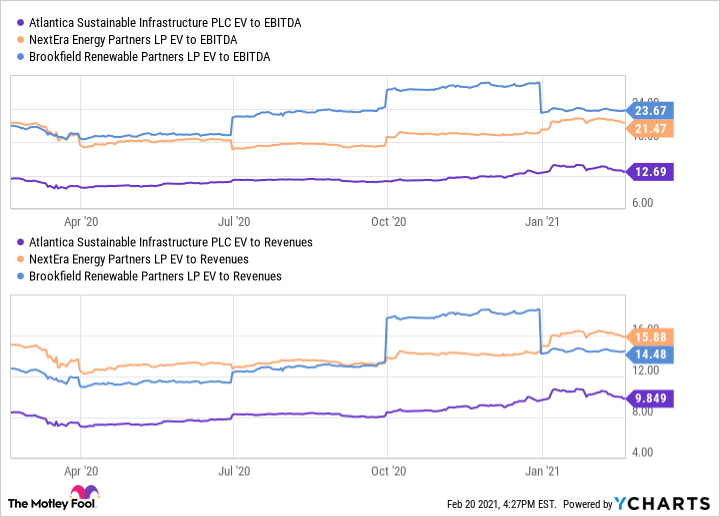 Looking beyond utility-scale generating capacity, there are plenty of commercial and consumer opportunities. One way to play the growth in solar is with a supplier of the equipment like Enphase Energy. The solar power technology company supplies microinverters for solar panels, which convert power at the panel into AC power used in the home or business. It also began supplying energy storage systems in 2020. Enphase has grown its sales, revenue, and margins significantly over the past three years.

Not surprisingly, investors have noticed that strong growth. The company guided for a revenue increase of 41% year over year in the first quarter of 2021, but the stock is trading at a current price-to-earnings ratio of about 200. So even at that growth rate, it will take some time for the company's stock to grow into the current valuation.

Like Enphase, Plug Power has been growing its business, and investors have taken notice. But Plug is valued more on potential than its current business. In fact, it is still not profitable. But it has announced several strategic partnerships recently and updated its guidance, increasing its gross billings targets for 2021 and 2024 after exceeding 2020 expectations. It now sees 2021 billings of $475 million, up from $450 million. Looking further ahead, the company said it now sees 2024 gross billings of $1.7 billion, an increase of more than 40% from prior estimates.

The hydrogen fuel cell maker also recently announced deals with South Korea's SK Group and French automotive company Renault that have helped boost shares. The agreement with SK Group will give the South Korean company a 10% stake in Plug Power with a $1.5 billion investment. Separately, the company and the French automaker announced the intention to create a 50-50 joint venture to integrate Plug Power's fuel cell technology into commercial vans in Europe.

Investor interest in Plug Power has driven its market capitalization up to about $24 billion, even after the stock has dropped 30% from recent highs of a month ago. In that same period, its price-to-sales ratio dropped from over 70 to a still very high level of about 46. So though it has potential, Plug Power is not a cheap stock right now.

Now can be the time to start

Growth in renewable energy generating capacity is an unmistakable trend. Investors can benefit by investing in owners and operators of that capacity, including all three mentioned above.

Faster growing companies like Enphase Energy and Plug Power have already been noticed and the companies' valuations have grown faster than their businesses. Both have promising potential, though, and should be on investors' watch lists. The risks are different as Enphase has proven its business, but its valuation has gotten ahead of that. Plug Power has yet to reach profitability, but its growing partnerships indicate it has a path to get there.

Now is the right time for investors to do the homework and either add some money or watch for a pullback in renewable energy stocks.