Please ensure Javascript is enabled for purposes of website accessibility
Log In Help Join The Motley Fool
Free Article Join Over 1 Million Premium Members And Get More In-Depth Stock Guidance and Research
By Daniel Foelber - Jan 31, 2021 at 8:45AM

This growth stock is now more expensive than Tesla and Nio.

2020 was a banner year for leading solar microinverter designer and manufacturer Enphase Energy (ENPH -7.53%). Its stock rose 570%, more than Zoom, Moderna, and just about every other growth stock other than Tesla. Enphase is now the largest publicly traded pure-play U.S. solar stock by market capitalization.

Enphase has some impeccable growth prospects and a leading position in a booming industry. But there are a number of reasons why its stock may have ran too far, too fast in 2020. Here's why Enphase Energy is a great company, but its stock is too expensive right now. 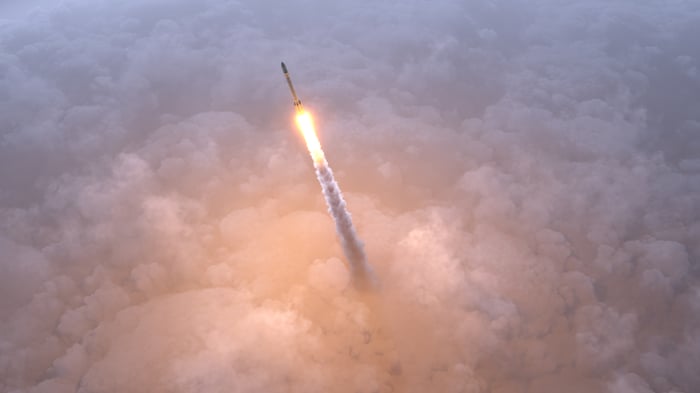 If you were an investor scanning the market for solar stocks in the summer of 2017, you probably wouldn't have noticed the less than $75 million gem that was Enphase Energy. The company that had once been valued at over half a billion dollars and sold for $15 a share was now trading for less than $1 a share. On the brink of bankruptcy and losing market share to rival SolarEdge (SEDG -6.46%), Enphase then restructured and went on to have one of the better four-year comebacks on Wall Street. Trading at over $200 a share today, you won't find many companies that have produced an over 200-fold return faster than Enphase.

Enphase's epic surge is due in part to its growth numbers -- which have been impressive. The company doubled revenue between 2018 and 2019. The results aren't out yet, but Enphase is guiding for revenue between $245 million and $260 million in the fourth quarter of 2020, which would bring total 2020 revenue to around $762 million (a 22% gain over 2019). Aside from revenue, the company is now consistently reporting profitable quarters on a non-GAAP basis, growing its operating cash flow, and sporting the highest gross margin in its history. At 53%, its GAAP gross margin is closer to leading chip manufacturers like NVIDIA or AMD than it is to other solar companies. 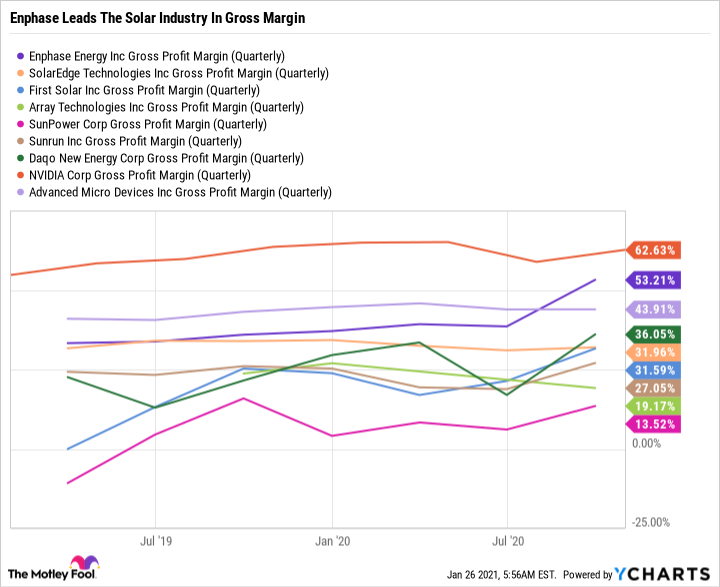 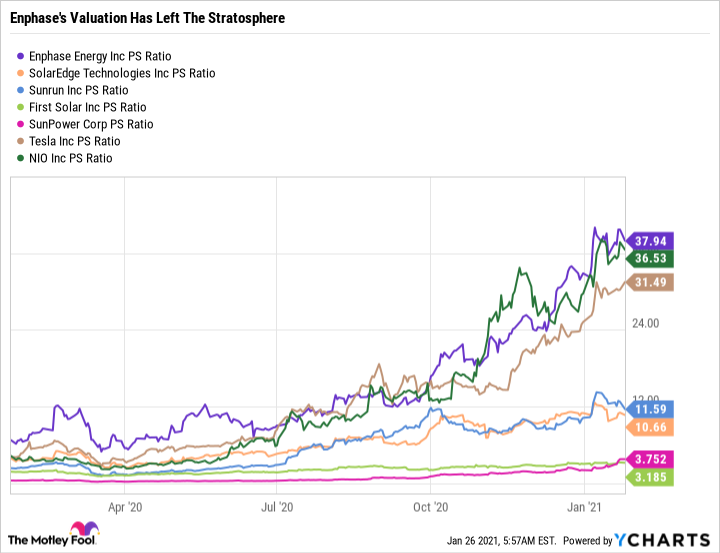 Enphase's staggering 38 P/S ratio is about the only chart you need to take a pass on this stock at its current price. It is nearly quadruple the 10.6 P/S ratio of its rival SolarEdge. And it's higher than Nio and Tesla, which surged over 1,100% and 740% in 2020, respectively.

The P/S ratio is the market capitalization of a stock divided by its revenue. Put another way, imagine if you had a coffee shop that earned $100,000 a year in revenue and the market valued your business at $3.8 million even though you're barely turning a profit. That's how much the market is valuing Enphase's growth, so much so that it's willing to pay a premium price today because it believes in the future of the company.

But it's not just the high P/S ratio on its own that makes Enphase an expensive stock. It's also the fact that Enphase isn't growing revenue at the same pace it did in 2019. Comparing Enphase to other hyper-growth stocks like CrowdStrike or Zoom further outlines Enphase's lofty valuation. Although CrowdStrike and Zoom both have a higher P/S ratio than Enphase (61 and 59, respectively), they are growing revenue much faster than Enphase. 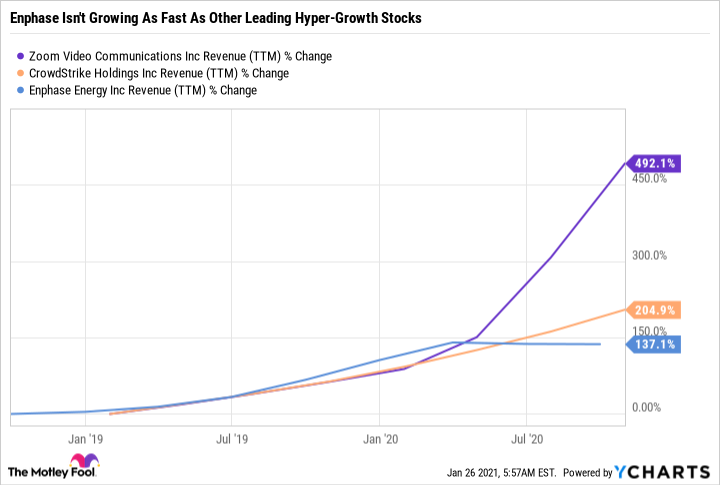 CrowdStrike is expected to double its revenue (again) in Fiscal Year 2021, whereas Zoom's P/S ratio is misleading because it factors in the company's first-half 2020 revenues, which are a fraction of what it's earning today.

A league of its own

Enphase has found itself in uncharted territory (literally). Its valuation is multiples higher than that of other leading solar companies. Although it has one of the highest growth rates and gross margins in the sector, 2020 revenue is expected to grow by just 22% year over year. 2021 will need to generate much higher revenue growth or Enphase's share price will need to come down before the company is worth considering. And there are other concerns as well. Enphase has picked up its profitability, but it technically lost money in the second quarter of 2020. It is also compensating its employees with a fair amount of stock-based compensation, which isn't shown in the non-GAAP numbers it tends to quote.

Enphase is a great company, but an expensive stock. There are plenty of better solar stocks and wind stocks at more attractive valuations.