Please ensure Javascript is enabled for purposes of website accessibility
Log In Help Join The Motley Fool
Free Article Join Over 1 Million Premium Members And Get More In-Depth Stock Guidance and Research
By Dan Caplinger - Mar 17, 2021 at 11:39AM

There's a lot of consternation even though the central bank has made its path clear.

The stock market saw continued volatility on Wednesday morning. Market participants tried to get their bearings amid conflicting signs from Washington, Wall Street, and the broader U.S. economy. Although there's still a lot of optimism about the potential for a full economic recovery from the coronavirus-provoked recession, some wonder whether that recovery will come as quickly or be as strong as hoped. As of 10:30 a.m. EDT, the Dow Jones Industrial Average (^DJI) was up by 14 points to 32,840. However, the S&P 500 (^GSPC) had dropped 15 points to 3,948, and the Nasdaq Composite (^IXIC) was down 86 points to 13,386.

A lot of stock market investors lately have been looking closely at the Federal Reserve, which will conclude a two-day meeting this afternoon to give its latest reading on the economy and the future course of its monetary policy strategy. As the market goes through the first anniversary of some dramatic steps the Fed took during the worst of last year's crisis, some wonder whether the central bank will be able to dictate how financial markets respond as effectively in the future. 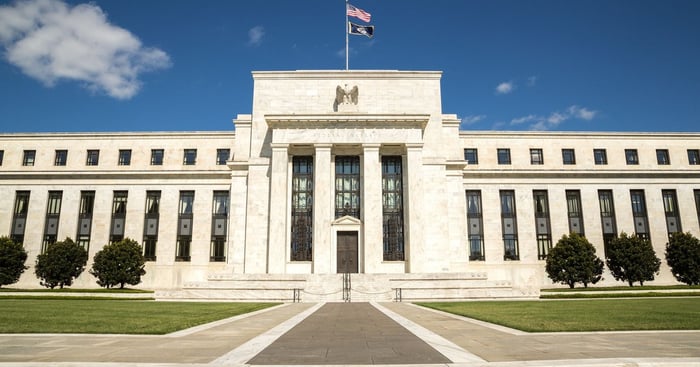 Investors look to the Fed for a variety of reasons. The one with the most direct impact on investors is that the Fed controls key short-term interest rates that can encourage or put the brakes on economic growth. The Fed's dual mandate requires it to do what it can to encourage minimal levels of unemployment without causing troublesome levels of inflation in the financial system.

For years, inflation hasn't been a problem at all. Falling energy prices and rising productivity from technological innovation has helped to keep inflation in check. In fact, at times, the Fed has worried more about deflation than inflation. That's been the basis for its stance to keep interest rates low not just now but well into the future. The Fed doesn't want to tighten its monetary policy prematurely and cause another economic downturn.

Now, though, some investors are getting fearful about inflation. The flood of trillions of dollars of economic support has created an environment that could bring about a quick recovery from the 2020 recession, and pent-up demand could boost prices. Already, booming asset prices both in the stock market and for new categories of collectibles in the non-fungible token space are signaling that there's a lot of cash in the system.

Those fears have sent long-term interest rates high despite the Fed's efforts. The 10-year Treasury yield has risen by a full percentage point since September 2020, and the 30-year yield is starting to approach the 2.5% mark for the first time since 2019.

The Fed has to weigh its policy decisions carefully to assert its control over the economy. It doesn't want to boost interest rates until absolutely necessary. But at some point, if the bond market keeps sending yields higher, the central bank will have to acknowledge the need to take action to head off a potential future threat.

What the Fed means for stock markets

Bond investors see the direct impact of Fed decisions very quickly. For stock investors, though, the effect the Fed has can be subtler.

However, some industries are closely tied to Fed moves. Investors in bank stocks like JPMorgan Chase (JPM) have seen their shares rise sharply as long-term rates have jumped. That's because banks profit from the spread between long-term and short-term interest rates, and the prospect for wider spreads has helped bank stocks climb.

Conversely, high-growth stocks in industries like technology have to be concerned. Many have tied the big jump in stock valuations to the fact that interest rates have fallen so much. When rates are low, the value of potential profit far in the future gets magnified. Moreover, growth stocks rely on low costs of capital that are available in low-rate environments. If favorable conditions go away, both of those growth drivers could turn into headwinds.

That's why investors are on edge about the Fed's coming announcement Wednesday afternoon. The central bank needs to walk a fine line in order to reassure investors that it has its finger on the pulse of the economy. Otherwise, the volatility we've seen lately could get worse.