Please ensure Javascript is enabled for purposes of website accessibility
Log In Help Join The Motley Fool
Free Article Join Over 1 Million Premium Members And Get More In-Depth Stock Guidance and Research
By Rich Duprey - Mar 20, 2021 at 8:14AM

With California finally falling in line to allow theme parks to open, this could be a summer of fun for investors.

California is finally allowing the state's theme parks to reopen, albeit with a host of restrictions. Out-of-state tourists are banned, only 15% capacity is allowed, and you're not allowed to shout with excitement while on a ride.

That isn't stopping park operators from opening their gates, though. After remaining closed for more than a year, they need the visitors again. Most of these entertainment giants were already operational, so they haven't been without money, but not all operators are the same. Teasing out which ones might be the best investment might not be so easy either, but at Motley Fool CAPS, the wisdom of crowds is used to find winning investments. 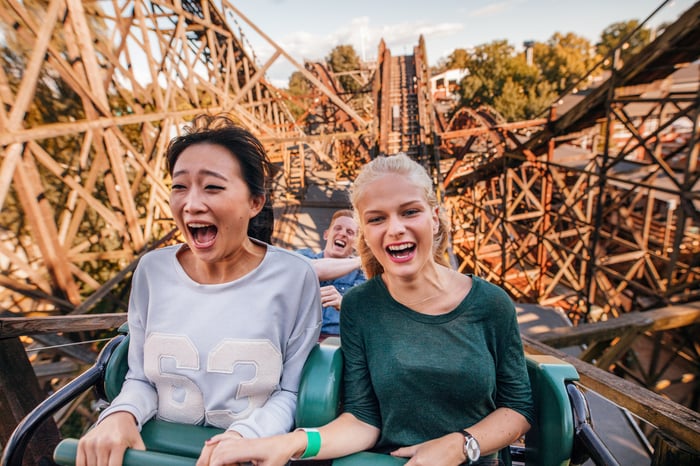 Importantly, players with higher ratings have more influence on a stock's rating, so if you've proven your investor chops with a great stock-picking track record, CAPS gives your opinion more weight.

You can put the wisdom of crowds to your advantage for your own portfolio, which could be useful in choosing between the competing theme park operators. Let's see what the top stock pickers are saying about entertainment leaders Cedar Fair (FUN -3.81%), Disney (DIS -4.01%), and Six Flags (SIX -5.07%).

What investors might be noticing: It goes without saying 2020 was a bust for regional theme park operator Cedar Fair even if it was able to open most of its parks at some point during the year. Cedar Point park in Ohio, however, is its flagship operation and by far its biggest. Being open through the summer and fall could help prevent the nearly 90% decline in revenue Cedar Fair suffered. Since last year's season-pass holders were given a full-year extension for 2021, revenue and profits could suffer, suggesting the stock's 30% gain this year -- wiping out almost all of the pandemic losses -- could be a sign it's moved a little too far too soon.

What investors might be noticing: Right after California announced it would permit attractions to open in the state, Disney said Disneyland would reopen for business on April 30. The media and entertainment giant is different from Cedar Fair, though, in that it refunded its season-pass holders last year and has eliminated that perk for the current year. That means anyone going to Disneyland will be paying higher daily rates, contributing to Disney's revenue and profit stream. That is, of course, the other thing about Disney: It has multiple revenue streams. While most of them were hurt by the pandemic because they are all so interrelated, they will provide Disney with a tremendous boost as the economy reopens.

What investors might be noticing: Six Flags is wasting no time getting its parks in California open again, announcing it will reopen Six Flags Mountain and Six Flags Discovery Kingdom on April 1 and April 2, respectively, for members and season-pass holders, and to the general public on April 13 (it also reopened Six Flags Mexico on March 18). While Disney is arguably the best-known theme park operator, Six Flags is the largest with 26 parks in North America, 23 of which are in the U.S. That likely explains, in part, its low ranking in CAPS as it had the most to lose from the pandemic among theme park operators. That's also a possible explanation for why its stock is up the most of the three parks year to date. Vaccines rolling out and an economy reopening could mean it has the most to gain.