Please ensure Javascript is enabled for purposes of website accessibility
Log In Help Join The Motley Fool
Free Article Join Over 1 Million Premium Members And Get More In-Depth Stock Guidance and Research
By Alex Carchidi - Mar 22, 2021 at 6:55AM

The clinical-stage antibody treatment developer has a fair way to go before it gets a product to market -- but it's not going it alone.

Fear of missing out -- also known as "FOMO" -- is a common yet dangerous emotion in the world of investing. It's completely understandable why an investor would want to hop onto a stock that has been skyrocketing, even if they're risking losses from a sharp reversal if that purchase is of an overvalued equity near its peak. On the other side of the coin, few people fear the prospect of avoiding a massive loss, but they still might hesitate to "buy the dip" on a stock if they suspect that the company's future could be other than  bright.

In this vein, shares of antibody developer Zymeworks (ZYME 2.92%) might seem like a questionable purchase. Over the last two years, the stock has careened wildly with every report of progress or failure in its clinical trials, and its late-stage pipeline is starting to look a bit sparse. Should investors take the plunge and bank on its upcoming clinical trial results to drive the stock back up? 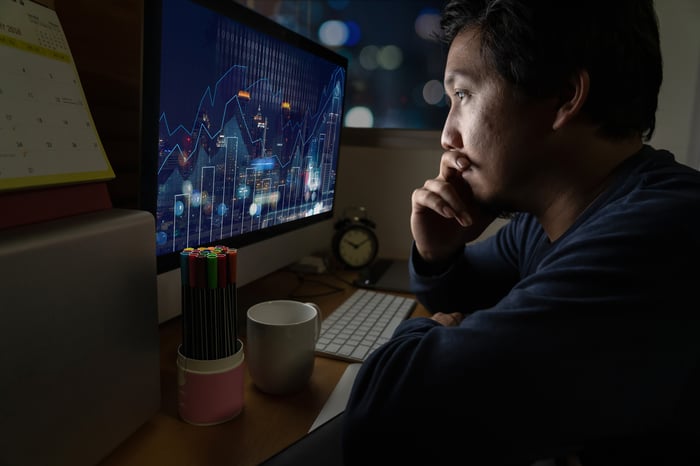 Why some investors might think they missed the boat

Investors' current hesitations about this stock likely can be traced back to late January, when an unimpressive update on one of the company's phase 1 clinical trials -- for cancer treatment ZW49 -- led to a sharp sell-off. The stock has yet to recover, and it may take quite some time to do so, if it ever does. Even for investors who don't consider a major setback in an early-stage trial enough justification to drop a biotech stock, the issues with ZW49 were a major buzzkill.

However, I'm of the opinion that it isn't too late to buy Zymeworks stock. The company still has plenty of growth potential -- assuming that it can get its headline therapy projects off the ground.

Bispecific antibody therapeutics and antibody-drug conjugates are the heart of Zymeworks' pipeline. In English, that means the company is developing anti-cancer treatments that are designed to target two different sites on a cell. This, in theory, should make them safer and more effective than antibody treatments that bind to only one site.

Zymeworks' lead candidate, zanidatamab, is currently in phase 3 testing as a treatment for biliary tract cancer. Beyond that, earlier-stage trials are ongoing to explore its efficacy against breast cancer and other solid tumors. The biologic could also be used in ovarian and salivary gland cancers, among others.

Skeptical investors might posit that the potential value of the company's pipeline projects is already being factored into its stock price, meaning that there's no benefit to purchasing it at this point in the game. However, this argument doesn't fully appreciate Zymeworks' better-than-average ability to forge new revenue-bearing collaborations with larger competitors or start new projects with their help.

Despite its recent setback with ZW49, Zymeworks is still strongly positioned to grow. In the first half of this year, it will initiate several new programs examining zanidatamab for breast cancer as a monotherapy or combination therapy, and it might announce others. It'll also report phase 2 data from existing projects. Each of these events will likely catalyze movement in the stock.

From now until its pipeline projects come to fruition (assuming that they do), Zymeworks' partnerships will support the company lavishly. Its development collaborators are a who's who of big pharma power players, including the likes of Merck, Johnson & Johnson, Eli Lilly, and GlaxoSmithKline. These partnerships are worth more than just prestige: Management calculates that meeting the development milestones of its existing arrangements would deliver as much as $8.6 billion in revenue. That sum would be spread over at least a few years, but it's more than enough to keep its research and development budget of $168.5 million in 2020 fully funded. 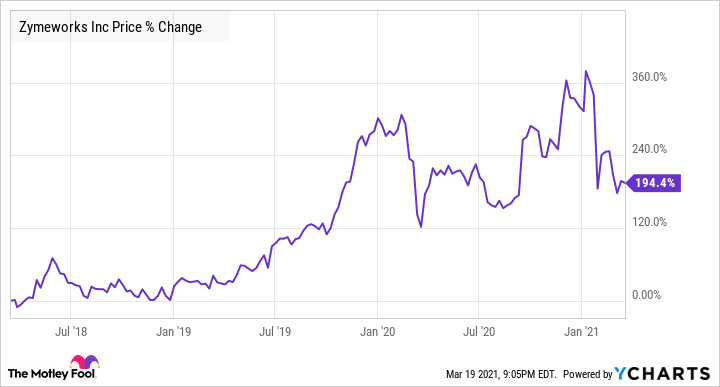 The right time may be approaching

But, as useful as these collaborations have been in advancing the company's capabilities and supporting its operations with revenue, it's important to remember that they might not be enough to set shareholders up for success in the long term. Milestone payments and royalties are common sources of income for early-stage biotechs, but it's difficult for a maturing company to flourish without products of its own.

Finishing the commercialization of a wholly internally developed project like zanidatamab will prove that Zymeworks is a credible drugmaker that doesn't need to rely on larger partners to survive. If everything goes as planned, it could commercialize zanidatamab in late 2022. Until then, there is plenty of time for would-be investors to find opportunities to buy in.

Why Zymeworks Stock Is Rocketing Higher on Friday

Why Zymeworks Stock Is Crashing Today