Management is diluting shareholder value at an alarming rate.

Shares of WiMi Hologram Cloud (WIMI -8.67%) got crushed on Tuesday after the company announced a substantial stock offering. As of 11 a.m. EDT, the stock was down a whopping 19%.

WiMi is selling almost 11.2 million units -- not shares -- in this offering, similar to a special purpose acquisition company (SPAC). These units include an American Depositary Receipt (ADR) as well as 0.4 warrants. (ADRs are what many international stocks use instead of directly listing shares on a U.S. exchange.) Let's say you purchase 10 of WiMi's units when the offering closes on March 25. You would get 10 ADRs and four warrants, which entitle you to four more ADRs down the road.

The units are being sold for $7.50 each, so WiMi is getting $83.8 million by doing this. However, that price is lower than where the stock was trading at the time, so this is a reason the stock is falling today. Furthermore, the warrants are exercisable immediately at $8.60 per ADR and expire in two years. That's hardly the kind of exercise price premium investors have come to expect with warrants. (With SPACs, the exercise price is typically 80% higher than the offering price.) Both prices communicate that either WiMi management or investors (or both) aren't overly bullish about the direction of its stock price over the next two years.

When including the warrants, this stock offering includes over 15.6 million ADRs for WiMi. Considering the company had approximately 75 million ADRs outstanding as of Dec. 31, this is huge dilution of existing shareholder value -- something that's been going on ever since the stock gained a following in mid-2020. 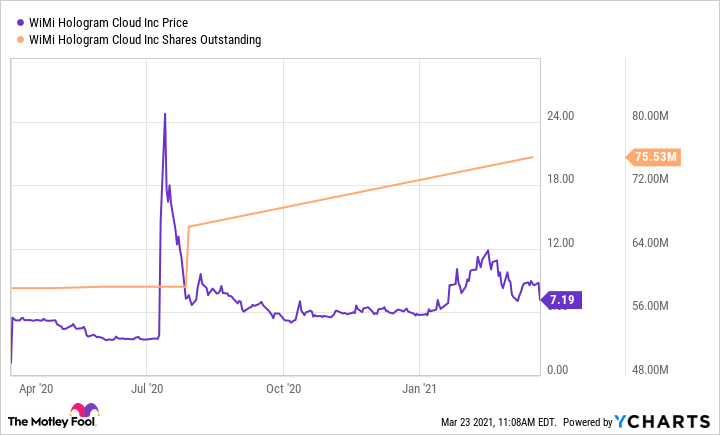 Many investors are very bullish on WiMi Hologram Cloud, due to its patent library with applications across various industries. And the company regularly announces new initiatives that seem to expand its total addressable market. That said, over the past year, WiMi's business results have shown little to the support the prevailing narrative surrounding the opportunity.

Perhaps one day WiMi's business will finally show how important its hologram technology is. However, until then, it will be hard for this stock to go back up to previous highs if the company keeps issuing new shares at this rate.

Why WiMi Hologram Cloud Stock Was Going Back Down Today