Shares of WiMi Hologram Cloud (WIMI -2.22%) soared on Tuesday. As of 3 p.m. EST, the stock was up about 14%. And some would have you believe it's somehow related to former President Barack Obama. Hold on to your saddles, partners; this is going to take some explaining.

A press release today highlighted President Obama's love of all things technology. It pointed out his recent appearance on Oprah Winfrey's talk show. (He looked like he was present in the room with Oprah when in fact he wasn't.) The article then transitioned from Obama to talk about augmented reality (AR) in general and WiMi's vision for its business.

Here's the thing: The press release wasn't from WiMi but rather from an entity called Flipclutch. The company describes itself as "a leading market research company in Hong Kong." But I have to nitpick a claim this market-research leader made in its press release: It said Obama appeared on Oprah's show called Oprah Talks. However, to my knowledge, no such show exists. Oprah has a show called Oprah Talks COVID-19, but the former president hasn't appeared on it. He did, however, make a guest appearance to talk about his book on The Oprah Conversation.

Maybe this is a trivial detail. Maybe it's not. I'll let the reader decide.

Having big names like Obama and Oprah used in the same article as WiMi is generating some buzz. Then too, Flipclutch used a lot of buzzy words to talk about WiMi specifically. Some of the words and phrases from the article that caught my eye include AR, cloud, big data, holographic cloud comprehensive technical solution provider, 5G, advertising, payments, home entertainment, face recognition technology...well, you get the idea. With all that going for it, how could WiMi stock lose?

Notably absent from this market research is anything related to WiMi's current business or financials. Despite Flipclutch's inspiring outlook for the multiple megatrends that WiMi will benefit from, nothing changed for WiMi today. Its two main revenue streams are still the same: It makes ad campaigns for TikTok (and other platforms) and processes mobile app payments with its middleware software. The article wasn't material to shareholders in the least. 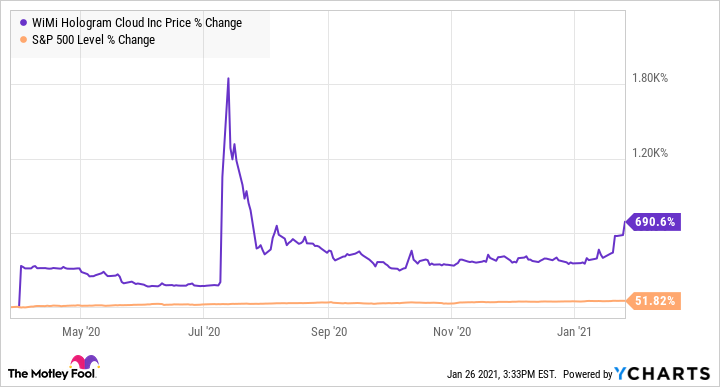 While investing is a forward-looking exercise, there's a difference between that and pure speculation. I'd argue that WiMi stock has become the latter. It's true that the company claims various patents for hologram technology in China, but it's been light on details regarding a business plan for those patents.

Taking a step back from the hype, WiMi raises many red flags for me, including its misspelled name on its own investor-relations website: "WiMli".

If holograms are something you're interested in, I believe you can afford to sit this one out for now, at least until WiMi is actually making money directly from this source. If the market opportunity is truly as big as some say, and WiMi is indeed the company to seize the opportunity, then it can create shareholder value for years, not days. Therefore, you can comfortably wait this one out while focusing on growth stocks with more established businesses.

Why WiMi Hologram Cloud Stock Was Going Back Down Today