Please ensure Javascript is enabled for purposes of website accessibility
Log In Help Join The Motley Fool
Free Article Join Over 1 Million Premium Members And Get More In-Depth Stock Guidance and Research
By Ryan Downie - Updated Apr 1, 2021 at 8:12AM

It's up more than 1,300% since its IPO, but can investors still expect growth from the e-commerce powerhouse?

Etsy (ETSY 4.64%) has exploded since its 2015 IPO at $16 per share. The stock has charged to more than $200, most of which occurred in the past 12 months -- Etsy was under $40 in March 2020. An $80,000 initial investment at the IPO price would've made you a millionaire by now, so it's fair to wonder whether there's any more room for the stock to run higher. Etsy has a great business model for the current economy, but is there still a reason to buy at this price?

Etsy is expensive according to relative valuation metrics, but those are always important to view in context for high-growth stocks. Etsy shares trade at a price-to-sales ratio of 16 and a forward price-to-earnings ratio of 69.2. It wouldn't make sense to pay that sort of premium for a more mature company like Coca-Cola or Walmart, which are already so large and successful that they can't grow very quickly.

Etsy is a different story, though. The company has averaged about 60% annual growth over the past three years, and analysts are forecasting more than 30% compounding expansion for the next several years. Hypothetically, a 30% earnings CAGR would lead to a 17.5 forward P/E ratio five years from now if the price never changes.

This is why popular valuation ratios such as price-to-earnings, price-to-book, and enterprise-value-to-EBITDA can't be applied to growth stocks in the same manner as to value stocks. A disruptive future industry leader could easily double or triple in size over the medium term, and bullish investors are more than happy to pay a premium on current fundamentals to own those future leaders. People who are optimistic about Etsy's trajectory assume that the company's coming earnings growth will be more than enough to push the stock price higher. 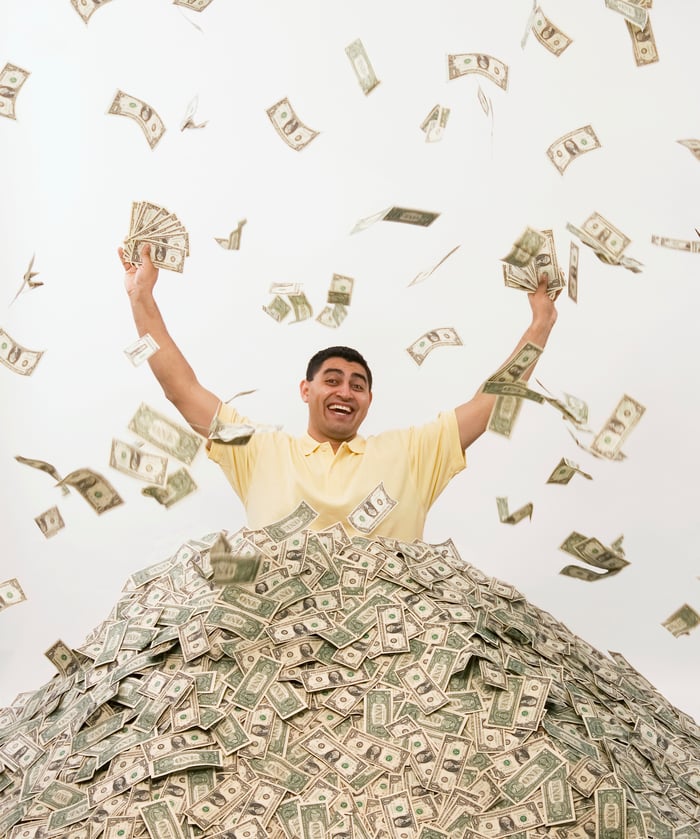 Etsy's place in the future of e-commerce

E-commerce has been a growing force in the retail landscape for more than a decade, and the impacts of the 2020 global pandemic accelerated that trend. Online sales jumped to more than 21% of total U.S. retail sales in 2020, up from 15.8% in 2019. As the fourth-most visited e-commerce site in the U.S., Etsy is in an excellent position to capitalize on this growth. Unlike competitors Amazon, eBay, and Walmart, Etsy has a more niche reputation as a destination for handcrafted and custom goods made by individuals. There are other product categories on the site, but Etsy still has a unique spot among the major e-commerce platforms. The company added 1.6 million active sellers last year, and its stellar performance with products such as face masks demonstrates the adaptability of both buyers and sellers on the site.

If vaccinations and herd immunity are effective in reducing COVID-19's impact on public health, we will likely see a leap in demand for brick-and-mortar stores. Early indications show that people are excited to return to normal, with pent-up demand for travel, experiences, and public activities. There's a chance that online sales will lose some share of the overall retail pie in the short term.

Regardless, last year's soaring e-commerce performance was the acceleration of an existing trend, and it's going to keep expanding over the medium term. Different retailers have invested more heavily in optimizing their digital channels, consumers are more comfortable than ever with shopping from home, and logistics are more efficient than ever.

There's every reason to expect that Etsy will grow along with the rest of e-commerce leaders. However, fragmentation might be an issue that drags on that growth rate. Solutions from companies such as Square and Shopify are making it easier than ever for smaller vendors and boutiques to service customers online. To deliver value for its sellers, Etsy will have to remain price-competitive or provide novel services that aren't matched elsewhere. There's a good chance that we'll see more and more small sellers staying independent. This dynamic won't be enough to dethrone the crafting giant in the next few years, but it's something for investors to monitor.

It's not too late to get in on Etsy, but it's probably too late to expect the same magnitude of returns that the stock has delivered since its IPO. There's clearly room to run upward here, but a lot of future success is already assumed in the current prices, as evidenced by the aggressive valuation ratios.

If you love the company and believe in the model, you can buy it today without guilt or hesitation. There's a good chance that Etsy will outpace the market over the next few years. Just don't be shocked if the stock experiences volatility as the market and retail world rebalance to a post-pandemic equilibrium.

Can Etsy Stock Climb Back to Its 2021 Highs?

Etsy Stock Could Boom With New Markets. Is It A Buy?

The Biggest Reasons Etsy Could Be a Lucrative Stock