Please ensure Javascript is enabled for purposes of website accessibility
Log In Help Join The Motley Fool
Free Article Join Over 1 Million Premium Members And Get More In-Depth Stock Guidance and Research
By Alex Carchidi - Apr 4, 2021 at 6:12AM

In some ways, this healthcare stock is outside his wheelhouse. But there could be attractions.

As the patron saint of value investors, Warren Buffett's strategies for picking stocks -- and his preferences for holding them for the long term -- are so well-known that they're practically cliches. But don't let your familiarity with his approach trick you into thinking that it's stale. Buffett's reputation is well-earned, and there's a lot to learn from how he evaluates stocks.  Because of that, I find that it's a good exercise to attempt to analyze stocks that I might want to buy from his perspective.

So what might the Oracle of Omaha think about Halozyme Therapeutics (HALO 6.64%), a biotech company that makes a drug delivery system that can cut the time required for intravenous infusions from hours to minutes? Biotechs aren't exactly his favorites, given that their earnings are highly unreliable and gated behind years of risky capital-intensive development effort funded by debt, all which he eschews for businesses with safer and cheaper revenue flows. But, this stock might be special because it doesn't undertake risky drug development on its own. Instead, Halozyme rents the right to use its delivery technology to pharmas and biotechs that make drugs for infusion. Many of the traditional objections that Buffett might have to investing in it therefore aren't applicable -- but would that be enough to prompt him to buy? 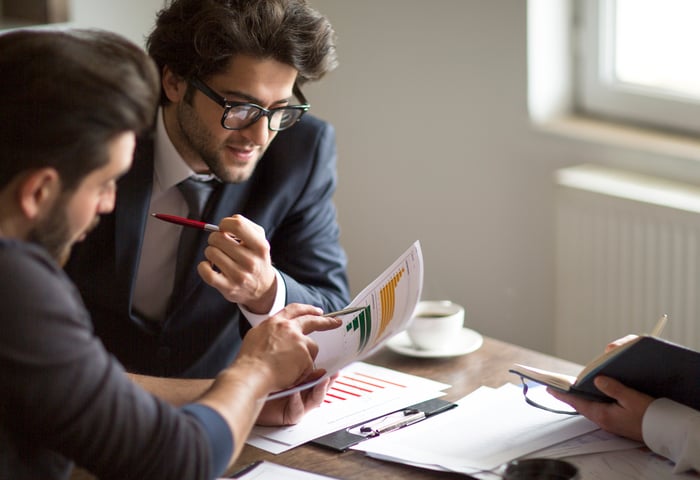 There are quite a few factors that make Halozyme a great pick. With a profit margin of 48.2% in the last quarter of 2020, it's strongly profitable, and that's something that should appeal to all investors. Because of the long product life cycles in the pharmaceutical industry, it doesn't need to keep investing in research and development to support medium-term recurring revenue from its existing royalty contracts. Plus, its business model doesn't need to shift over time, as new drugs are made all the time, and some will inevitably need its delivery systems to be efficient. Currently, there are 16 drug candidates in development that use Halozyme's technology, with more on the way.

Year over year, its quarterly revenue most recently grew at a rate of 126.8%, to a total annual figure of $267.59 million in 2020. And in the past five years, trailing revenue has increased by more than 68%.That pace of growth is faster than many of the companies Buffett has invested in, so it could be alluring for him.

Management predicts that by 2027, the company will bring in around $1 billion in royalty revenue alone, up from $88.6 million last year. That would require that segment of the business to deliver a compound annual growth rate of about 40%. Revenue growth aside, Halozyme is also taking care to expand efficiently with respect to its financial resources. Per its latest earnings report, its cost of revenue of $43.3 million and its selling, general, and administrative (SG&A) expenses of $45.7 million in 2020 are both relatively small as a percentage of sales and proportionally falling over time. 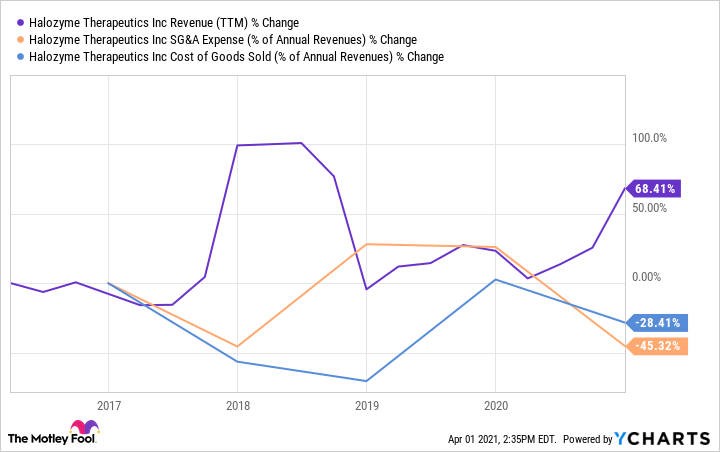 The first thing that undermines Halozyme as a potential Buffett stock is the innovation-intensive nature of its products. While it's true that licensing out the right to use its technology in various drugs is a reliable and long-lived source of revenue, it's almost certainly the case that the company will need to invest considerable funds in developing the next generation of its products to remain competitive. After all, there are many different drug delivery systems, and many biotechs simply develop their solutions in-house. Plus, there might be other companies working on making similar technologies that would surpass Halozyme's as it exists today. So, Buffett would find that Halozyme lacks a strong competitive moat to protect its revenue from erosion. Beyond 2027, management's plans rely on new patents and new platforms to drive revenue growth, and in Buffett time, that's right around the corner.

Financially, Halozyme also has a few issues. Its debt of just over $402 million isn't something that Buffett would love, even though its cash holdings of $368.01 million and its yearly revenue make that figure manageable. Then there's its earnings history -- or rather, its lack thereof. Buffett prefers companies that have shown a consistent, long-term ability to grow earnings, but Halozyme didn't have any substantial earnings to report whatsoever until 2017, and it reported losses in 2018 and 2019. This could be solved with time, but knowing Buffett, it might be years before he would be comfortable investing in Halozyme.

As impressive as Halozyme is overall, I have trouble believing that it would ever end up in Berkshire Hathaway's portfolio. The largest issue is that it simply doesn't have the long history of steady performance that characterizes most Buffett stocks. But its reliance on R&D spending to maintain its moat might also be a reason for orthodox value investors to pass.

Nonetheless, I still think that Halozyme is overall a great stock, especially for healthcare investors who want to buy into a company with a long-term growth outlook and a somewhat steady business model. If you're a stickler for consistency of earnings, set yourself a reminder to check back on this company in a few years to reappraise its performance -- my bet is that you'll be pleasantly surprised.