Please ensure Javascript is enabled for purposes of website accessibility
Log In Help Join The Motley Fool
Free Article Join Over 1 Million Premium Members And Get More In-Depth Stock Guidance and Research
By Royston Yang - Apr 5, 2021 at 5:52AM

It's probably much, much more than you can imagine.

Many movies revolve around the topic of time travel. Wouldn't it be wonderful if we could just hop into a time machine and travel back in time with the investment knowledge that we have now? This is especially so if we had known which companies would do spectacularly well over a long period, helping to compound our wealth many times over.

One such company is Netflix (NFLX -0.67%). The on-demand streaming entertainment company went public on May 23, 2002, and has gone on to become one of the most dominant players in the industry, with a vast library of movies and TV series along with 200 million global subscribers.

How much do you think you'd have if you had invested $10,000 when Netflix went public and just held its shares tightly over the last 19 years? Hint: It's probably much, much more than what you'd expect. 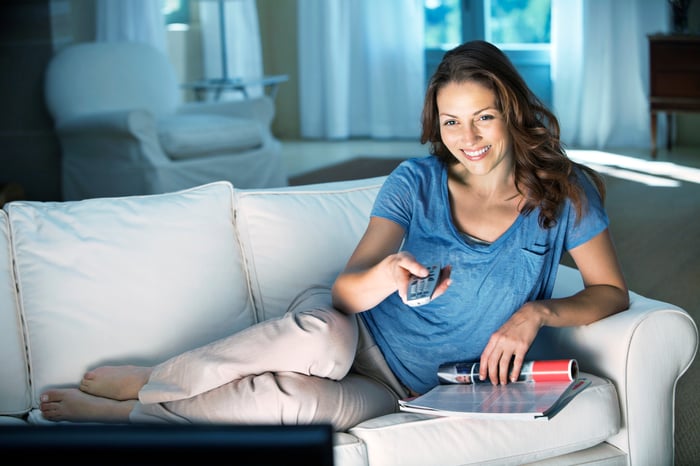 At the recent share price of $539.42, these shares would now be worth an impressive $5 million. Your wealth has multiplied by 500 times without you even having to lift a finger, for a compound annual growth rate of approximately 38.7%. It may seem incredible that your $10,000 could grow so large, but that's the beauty of a buy and hold strategy with a company that demonstrates strong growth over many years.

The journey was anything but smooth, though. The problem with knowing how much you'd end up with if you had started with $10,000 is that it ignores all the share price volatility and business developments in between. Netflix's share price went through numerous heart-stopping plunges that would have made even the bravest investor nervous.

In September 2011, CEO Reed Hastings angered customers by splitting up Netflix's then-popular DVD-by-mail service from its unlimited streaming package. The split resulted in an almost 60% price hike for customers who wanted to retain both services, angering them and leading to a mass exodus. This event alone caused Netflix's stock to tank by 77%.

Assuming you weren't scared out of selling your stock back then, there were other instances when Netflix's stock plunged sharply. From July till December 2018, Netflix tumbled by 44% while the three-month period from July till September 2019 saw the stock fall by almost 30%.

Reasons included slowing subscriber growth and impending competition from other streaming TV providers. These declines show just how tough it would have been to hang on to Netflix.

Netflix has shown that it has the foresight to be one of the first on the scene to offer streaming TV to its subscribers. Its subscriber base has grown by leaps and bounds since its IPO in 2002. Back then, subscribers amounted to just 670,000, compared to 200 million as of Dec. 31 last year. The COVID-19 pandemic has undoubtedly acted as a strong catalyst for the company as more people stayed home to watch television due to lockdowns, but investors should note that Netflix's subscriber numbers were continuously trending up even before the crisis.

In case you're wondering if Netflix's astounding growth was all in the past, the company has announced that it intends to ramp up its production schedule to deliver even more original content. With the crisis ebbing, productions are now back on track and Netflix has over 500 titles in post-production or about to launch, providing an even wider breadth of choice for subscribers. Netflix has also promised to release at least one new original film per week this year and is upping the ante for competitors such as Disney (DIS -1.73%).

Netflix's content is also being tailored to different audiences in different markets. In Japan, for instance, the company plans to release 40 new anime titles in 2021, double the number released last year. Its top local titles for the previous quarter include Barbarians, a historical German action series, and Sweet Home, a Korean horror series. Though these titles were produced for audiences in specific countries, they have also enjoyed a wider following outside their intended locations.

Looking forward, Netflix still retains the qualities that make it a great stock to own for the long term. And you probably won't need a time machine to know that when the business continues doing well, the stock should follow in due course.