Please ensure Javascript is enabled for purposes of website accessibility
Log In Help Join The Motley Fool
Free Article Join Over 1 Million Premium Members And Get More In-Depth Stock Guidance and Research
By Zhiyuan Sun - Apr 6, 2021 at 7:12AM

Want to bet on rising stars in the $61 billion U.S. marijuana industry? Here are the top picks.

With marijuana decriminalization or federal legalization looking slightly more likely under the Biden administration, investors have been piling into pot stocks to take advantage of the green Wild West. Such strong demand has bid up the prices of many reputable companies, however, making them prohibitively expensive. It's becoming harder and harder to find sector players that are growing without having to pay too much of a premium for them.

Some of the best choices right now are Harvest Health & Recreation (HRVSF), Ayr Wellness (OTC: AYRWF), and 22nd Century Group (XXII 1.08%). These three stocks have all returned between 192% and 367% over the past 12 months. Let's look at why they could become winners for your portfolio in the future. 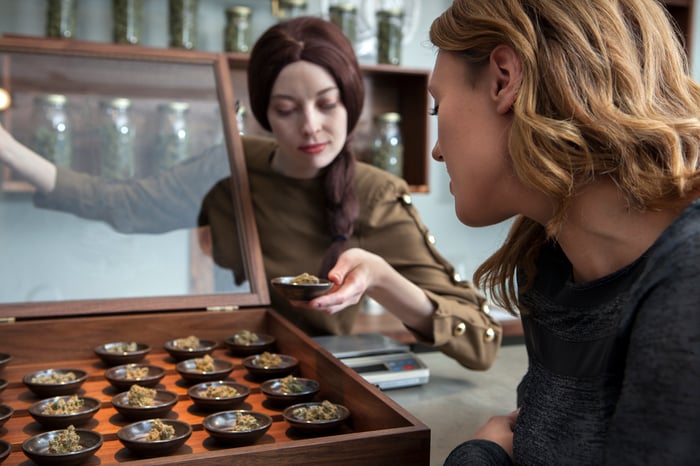 Harvest Health & Recreation is a leading marijuana grower in Arizona, which legalized recreational cannabis last November. Just this February the company's pot sales increased by a stunning 248% compared to all of Q4 2020. It operates 15 of its 37 dispensaries in Arizona, with the rest spread out across California, Pennsylvania, Maryland, and Florida.

The company is a diversified grower, selling its flowers, vapes, concentrates, topicals, and medical marijuana in its own stores and wholesale. In 2020, Harvest Health's revenue amounted to $231 million. This year the company is on track to achieve $380 million in sales.

Meanwhile, its stock is trading for only 2.83 times forward revenue. That is an excellent price to pay for a revenue growth rate of 64.5%. With the stock already up 274% from last year, I'd definitely grab some shares before it's too late.

Ayr Wellness is one of the most ambitious growers in the industry. Last December it paid $290 million to acquire Liberty Health Sciences, adding 31 dispensaries in Florida to its store count. By the end of the year the company expects to reach a total of 60 stores.

It also sells its products wholesale to more than 90 dispensaries across the country. At the moment, the company is seeing as many as 8,000 transactions per day across all locations, which is a massive increase over the 5,095 transactions per day in Q4 2020. Aside from the usual dried flowers and edibles, Ayr Wellness also offers the ever-lucrative cannabis-infused drinks for its customers.

What's more, Ayr Wellness is the No.1 most profitable pot grower in the nation, with a cash-flow-from-operations margin of 23.2%. In 2020 it brought in $155.1 million in sales and $56.2 million in operating income less non-cash items (EBITDA), and this year it expects to bring in $725 million in revenue and $325 million in EBITDA, mainly due to its Liberty Health acquisition.

Amazingly, the company only has a market cap of $1.5 billion, which means it is trading for just 2 times forward revenue. That low price is an absolute bargain for a 367% revenue growth rate.

Unlike Harvest Health or Ayr Wellness, 22nd Century Group focuses on developing experimental CBD and THC strains for pot growers. Right now it is looking at genetically modifying cannabis to produce higher yields, improve its therapeutic effects, and have greater disease resistance. It has patented these newly developed production methods, and plans to monetize the technology via partnerships with dispensaries this year.

Aside from research and development in the cannabis sector, the company also manufactures addiction-deterrent cigarettes. 22nd Century Group produces 1% of the U.S. cigarette market share by volume. This year, it anticipates it will launch its VLN cigarette pack, which offers 95% less nicotine than traditional brands. The company also develops cigarette packs for smoking research.

Last year, its tobacco sales grew by 8.8% over 2019 levels to $28.1 million. Meanwhile, its net loss narrowed to $19.7 million from $26.6 million. A big reason behind its cash use is 22nd Century Group's commitment to research and development, where it spends 15% of its revenue each year. The company is also doing well liquidity-wise, with $23.3 million in cash and no debt.

At the end of the day, 22nd Century Group is a small fish in the trillion-dollar tobacco and marijuana market, with a market cap of just $524 million. Investors who are interested in development-stage gems in either of the two sectors should definitely consider adding the company to their portfolios.