Please ensure Javascript is enabled for purposes of website accessibility
Log In Help Join The Motley Fool
Free Article Join Over 1 Million Premium Members And Get More In-Depth Stock Guidance and Research
By Trevor Jennewine - Apr 6, 2021 at 8:00AM

This technology could change the world -- and make investors richer.

Blockchain is a record-keeping system first developed by the pseudonymous creator of Bitcoin, Satoshi Nakamoto. The premise is simple: Transactions are grouped into blocks, validated by miners, and stored in a chronological "chain" across all nodes (computers) in a network. This means data is widely distributed and readily available to all participants.

That's important because all copies of the data must be identical. If any individual user attempts to edit the information, the network will reject the change and revert the blockchain to its previous state. In other words, a blockchain is a transparent, secure, and self-governing database. And while these ledgers gained fame as the technological underpinning for cryptocurrencies, they can be applied usefully to a wide array of industries.

Among the notable early adopters of blockchain technology are Microsoft (MSFT 3.20%), PayPal Holdings (PYPL 0.80%), and salesforce.com (CRM 0.42%). Here's what investors need to know about how blockchain could impact the futures of these three companies. 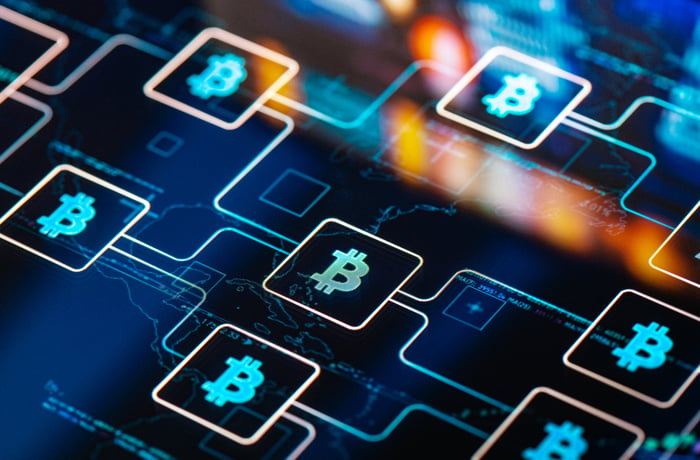 Publishers can now access royalty information in minutes, rather than the 45 days it took before. And Xbox finance operations are now 70% more efficient, according to Rohit Amberker, finance director of the Royalties and Content Operations team.

This royalty payment solution is powered by Microsoft's Azure Blockchain Service, a platform that simplifies the development of blockchain networks and applications. But other customers use the service as well, and their solutions are equally impressive.

For instance, General Electric Aviation has built a blockchain network to track airplane parts. That's important because airlines can't use any part unless they know its full history, which leads to substantial waste in the aviation industry. Notably, this solution allows the company to access verified data in real time, eliminating the need for inefficient tracking via paper documents. In fact, blockchain efficiencies could improve the industry's revenue by as much as 4% per year, or $40 billion, according to some analysts.

Starbucks uses Azure blockchain technologies to ensure its products are sourced ethically. Using the mobile app, consumers can scan a code on the company's packaged coffee and find out exactly where the beans were grown. The network also allows farmers to trace the movements of what they produce, providing valuable transparency. For example, some farmers may not know their product is export grade, so this technology gives them insight into the quality of their beans.

PayPal benefits from blockchain in a more traditional sense. In October, the company started allowing users in the U.S. to buy, sell, and hold Bitcoin and three other digital currencies through the PayPal app. The company plans to bring the same functionality to Venmo and international markets in the coming months.

Its fintech rival Square has allowed its Cash App users to trade Bitcoin since 2018. Since that time, Cash App users and user engagement have both trended upward, driving a significant increase in gross profit.

PayPal should see similar benefits in the coming quarters, but the company has even bigger plans. Last month, PayPal launched its Checkout with Crypto service, allowing consumers to make purchases with Bitcoin (and a few other digital currencies) directly from the PayPal app. Eventually, the company plans to make this option available for all of its 29 million merchants.

That would be a big step toward legitimizing cryptocurrency as a form of payment, and it could be a powerful growth driver for PayPal in the coming years.

Salesforce helps its clients develop and maintain relationships with their own customers. Specifically, the Salesforce Customer 360 platform unifies data from sales, customer service, marketing, finance, and other departments, making it easy for different teams to work together.

As part of Customer 360, Salesforce offers a low-code application platform that makes it possible for anyone to develop software, even if they don't understand computer code.

As a longtime innovator, Salesforce recognized blockchain's potential in 2019 and incorporated it into its low-code platform. Clients can now build blockchain-powered networks and applications through Salesforce, similar to the way Microsoft's clients use Azure Blockchain Service.

While this hasn't been a notable growth driver so far, it adds substantial value to Salesforce's platform. Blockchain has the potential to reshape numerous industries, and Salesforce is well-positioned to capitalize on that trend.