Please ensure Javascript is enabled for purposes of website accessibility
Log In Help Join The Motley Fool
Free Article Join Over 1 Million Premium Members And Get More In-Depth Stock Guidance and Research
By Timothy Green - Apr 6, 2021 at 10:17AM

The railcar manufacturer sees demand improving as the economy heats up.

Demand for railcars has been weak during the pandemic, and that weakness extended into the fiscal second quarter for railcar manufacturer The Greenbrier Companies (GBX 3.15%). Revenue plunged more than 50% from the prior-year period, and deliveries were down 37% from the fiscal first quarter.

Greenbrier pointed to a weak demand environment and extreme winter weather for the exceptionally large sales decline. Revenue of $295.6 million missed the average analyst estimate by more than $80 million, while a net loss of $0.28 per share was $0.09 per share better than analysts were expecting. Greenbrier barely turned a gross profit in its manufacturing business, generating a gross margin of just 0.2%.

While Greenbrier's results left a lot to be desired, management is optimistic that the situation will improve as the year goes on. 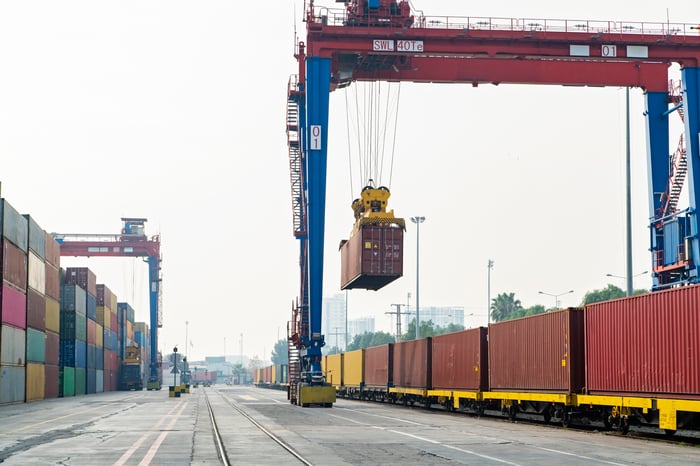 Greenbrier's bottom line has taken a big hit from the pandemic, but the company has maintained a solid balance sheet with plenty of liquidity throughout the crisis. Greenbrier had cash of nearly $600 million as of Feb. 28 along with additional borrowing capacity of $115 million. The company also has initiatives in place to free up another $100 million in liquidity.

"Greenbrier navigated what we expect will be our most challenging quarter of the fiscal year," said CEO William Furman. "Our near-term outlook is becoming increasingly optimistic as rail fundamentals improve."

Furman pointed to a variety of positive developments for the railcar industry. Rail loadings are up year to date as traffic increases, particularly in grain and intermodal; railroad velocity, a measure of train speed that includes intermediate idle time, is down by around 2 mph; and railcars in storage have decreased by nearly 150,000 from the peak in 2020.

Greenbrier's incoming orders look a lot better than its sales numbers. The company brought in orders for 3,800 new railcars valued at over $440 million during the fiscal second quarter. Those orders brought the company's backlog to just under 25,000 units.

"Our pipeline of new business inquiries in North America has expanded dramatically in the last 30 days. ... We have already restarted several production lines supported by firm orders to meet increased demand," Furman said.

Greenbrier is expecting the second half of fiscal 2021 to be stronger than the first half. In the longer term, the company expects environmental regulations in North America and Europe to benefit the rail freight industry. Economic stimulus and proposals for infrastructure legislation could also boost demand for railcars.

While shares of Greenbrier have surged since bottoming out in early 2020, the stock is still not all that expensive historically. Greenbrier's price-to-book value ratio currently stands just below 1.2. That metric dipped below 0.4 during the worst of the pandemic-driven sell-off last year, but it hit 1.6 when it previously peaked in late 2018. 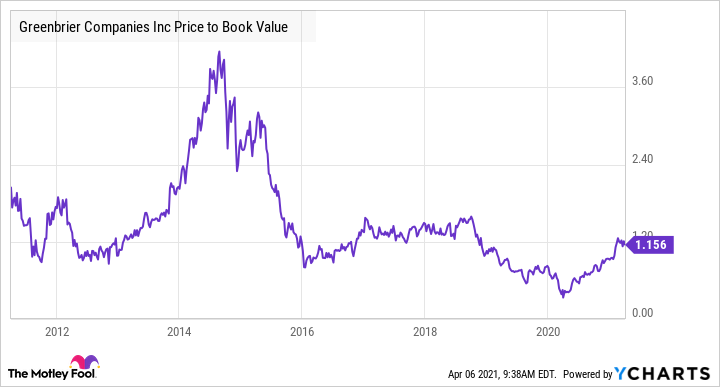 Greenbrier stock is not the bargain it was in the lead-up to the pandemic, but it still seems like a reasonable idea. A combination of a strong economic recovery and a potential infrastructure bill from the Biden administration could fuel strong demand for railcars in the coming years.