Please ensure Javascript is enabled for purposes of website accessibility
Log In Help Join The Motley Fool
Free Article Join Over 1 Million Premium Members And Get More In-Depth Stock Guidance and Research
By Zhiyuan Sun - Apr 8, 2021 at 6:55AM

This is one contrarian investment you don't want to miss out on.

The biotech sector has been on a roll for much of the past year. Even amid the pandemic, the iShares NASDAQ Biotechnology ETF (IBB 2.52%) has managed to return 69% over the past 12 months. Gilead Sciences (GILD -0.16%) stock, on the other hand, has underperformed during the same period, falling 30%.

What's intriguing about Gilead is that it is also trading at a substantial discount to its peers. This is a well-established viral disease, infectious disease, and oncology biotech. However, you can buy shares for around 9 times earnings and just over 3 times revenue, compared to the industry average of 31 times earnings and 8 times revenue. What gives? 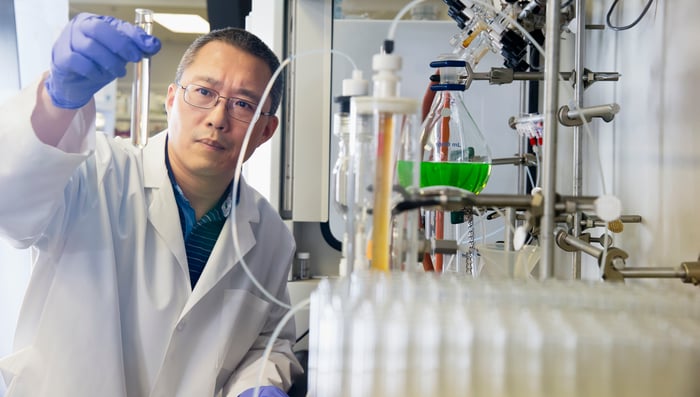 Can you count on Gilead?

In 2020, Gilead grew its revenue and earnings over the prior year by 10% and 14%, respectively, to $24.35 billion and $8.95 billion. A big chunk of that growth, however, came from sales of its new COVID-19 treatment, Veklury, also known as remdesivir. Now that coronavirus vaccines are widely available, however, it's safe to say that COVID-19 treatments are in lower demand. These developments have put around $2.8 billion of Gilead's annual revenue at risk.

What's more, Gilead's Hepatitis C portfolio saw a 30% yearly decline in sales as more and more patients who were cured of Hepatitis C no longer required the company's therapies. Its HIV portfolio revenue also fell as two of its drugs in the segment (Truvada and Atripla) lost their patent protection, putting over $3.4 billion worth of annual revenue at risk of generic competition.

With these facts in mind, it's easy to see why investors are concerned about Gilead's future. But I think cause for concern has been overblown. This year, Gilead still expects up to $25.1 billion in revenue and $7.45 in earnings per share (EPS). These represent increases of 3% and 5% from 2019, respectively.

The company has been reinvesting in its future, with over $5 billion of its revenue going into research and development (R&D) each year. Some development highlights involve Biktarvy, which has become the No. 1-prescribed HIV drug in the country. One out of two HIV patients in the U.S. is currently on Biktarvy. The drug did $2.5 billion more in sales in 2020 than in 2019, and does not lose its patent protection until 2033.

Gilead is also partnering with Merck (MRK 0.07%) to jointly develop a combination therapy (islatravir and lenacapavir) for HIV. The two biotechs will share research and development expenses. Upon reaching a $2 billion revenue milestone with the therapeutic, Gilead will receive 65% of future sales.

Organic development isn't the only card that Gilead holds. Last year, the company acquired biotech Immunomedics for $21 billion. Immunomedics markets an immunotherapy, Trodelvy, for the treatment of metastatic breast cancer. It also plans to expand the drug's label to targeting non-small-cell lung carcinoma, bladder cancer, and other types of breast cancer. The combined total addressable market of these indications amounts to more than $88 billion annually.

On top of all this, even Gilead thinks its shares are undervalued. Right now, it is buying back over $1.5 billion of its shares each year to boost its EPS. The company also pays out nearly $3.5 billion in dividends each year, giving the stock an impressive yield of 4.14%. Gilead's share buybacks and dividend payout amount to only 67% of its free cash flow, which is more than sustainable.

Overall, Gilead's acquisitions, new product launches, and research partnerships will more than offset woes from Veklury and its HCV franchise. Given that Gilead will likely maintain its growth trajectory, I would highly recommend investors who are passionate about biotech stocks consider adding it to their portfolios. It doesn't hurt that it's trading at an absolute bargain.