Please ensure Javascript is enabled for purposes of website accessibility
Log In Help Join The Motley Fool
Free Article Join Over 1 Million Premium Members And Get More In-Depth Stock Guidance and Research
By Alex Carchidi - Apr 8, 2021 at 8:11AM

Transformative changes are afoot, but they might take time to pay off.

If you're thinking about buying an unprofitable company, you need to keep two things in mind. First, the business needs to have a plan to eventually produce consistent and positive cash flows if it ever wants to convince the market that its stock is worth buying. And second, picking up a stock well before its future is secure is risky, but it also offers chances for significant gain.

In that vein, Tilray (TLRY) is a Canadian cannabis business that has a plan to become profitable but is still facing a big wildcard in the near future. In fact, buying the stock today could lead to a dramatically different return than buying it at the end of the month. Should investors take a calculated risk by buying early in April, or would it be better to wait a few more weeks -- or perhaps a few quarters? 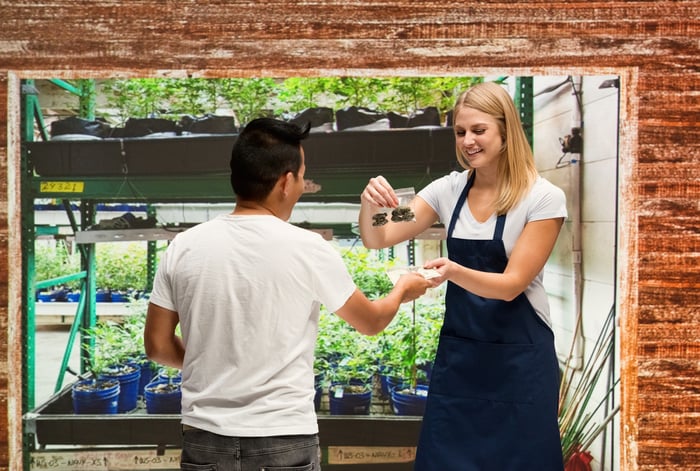 The Aphria merger is looming larger than ever, but it isn't the only factor

The biggest thing for investors to consider about purchasing Tilray this month is that its upcoming merger with Aphria (APHA) is very likely about to clear one of its last remaining hurdles. Late last year, the two companies announced that they were planning to merge in the second quarter of 2021. The deal was marketed as creating the largest global cannabis company by revenue, with the new entity having estimated revenue of $685 million in the first 24 months, not to mention $78 million in cost savings per year.

A vote will be held at a meeting of Tilray shareholders scheduled for April 16. If shareholders assent, the merger will proceed, and the deal will close sometime in the second quarter. Overall, the effects of the merger might take a year or two to benefit investors, so it isn't necessarily a point in favor of buying the stock right now.

Aside from the merger, Tilray also a few other things going for it, starting with its revenue growth of 26% last year compared to 2019. In 2020, its average net selling price per gram of cannabis rose by 51%, which is good news because it shows that the company is making progress with its pivot to high-value-added products like vaporizers. In the same period, its average cost per gram sold only increased by 37%, and its cost of sales as a percentage of revenue dropped to 88% from 114%, so the strategy appears to be working.

Similarly, while the company still reported cash outflows in 2020, its general and administrative expenses fell from 66% to 41%, and its sales and marketing expenses also contracted from 38% to 26% of revenue. That shows management's efforts to cut costs over the last three years are continuing to bear fruit. But the company still reported a gross loss of $3.56 million at the end of the year, so there's still more work to be done.

As positive as the company's near future may seem, there is a faulty argument in favor of buying the stock that bears discussion. Some investors may be interested in Tilray because they expect it to be in a good position to capitalize on cannabis legalization in the U.S., which last week advanced substantially with recreational use legalization in New York.

It's important to note that neither Tilray nor Aphria is currently positioned to generate revenue in the recreational market in the U.S., regardless of the shifting legal environment. Even after the merger, Tilray's participation will be limited to selling hemp and wellness products, which astute observers will note was already legal. Of course, the company could still increase its efforts to sell recreational cannabis products in America in the future.

In the meantime, though, the new entity's revenue growth will continue to be driven by its operations in the European medicinal cannabis market and the Canadian recreational market. Given that it will be the largest fish in both of those ponds, investors can look forward to deepening market penetration and (hopefully) operational profits stemming from low-cost cultivation in the E.U.

Purchasing Tilray early this month may be ill-advised, as new shareholders will be exposed to the risk of the merger deal falling through. If shareholders give the transaction their approval, it might still be better to wait for any post-combination volatility to settle before investing. In the long term, the newly formed company's size will be an asset, but it won't solve every problem.

In particular, management will need to continue with cost discipline and increasing the sales of the most profitable goods in the geographical segments where production costs are the lowest, which for Tilray means the E.U. If I weren't already a shareholder of Aphria, I would refrain from buying Tilray until a quarter or two after the merger closes. At that point, investors will have a bit more data about how the combined entity is performing, and they'll be able to weigh the risks more effectively as a result.