The tech giant can capitalize on the multitrillion-dollar bill in a number of ways.

Jeff Bezos made a surprising statement earlier this week.

The Amazon (AMZN 0.25%) chief came out in support of President Joe Biden's $2 trillion infrastructure plan and even the corporate tax increases that are expected to accompany it. In a statement posted on Amazon's website, he said:

We support the Biden administration's focus on making bold investments in American infrastructure. Both Democrats and Republicans have supported infrastructure in the past, and it's the right time to work together to make this happen. We recognize this investment will require concessions from all sides -- both on the specifics of what's included as well as how it gets paid for (we're supportive of a rise in the corporate tax rate). We look forward to Congress and the administration coming together to find the right, balanced solution that maintains or enhances U.S. competitiveness.

Like most big spending items, the bill is already proving to be controversial, and various business constituencies like the U.S. Chamber of Commerce have pushed back on the corporate tax increase. But Bezos is making a smart strategic move here. 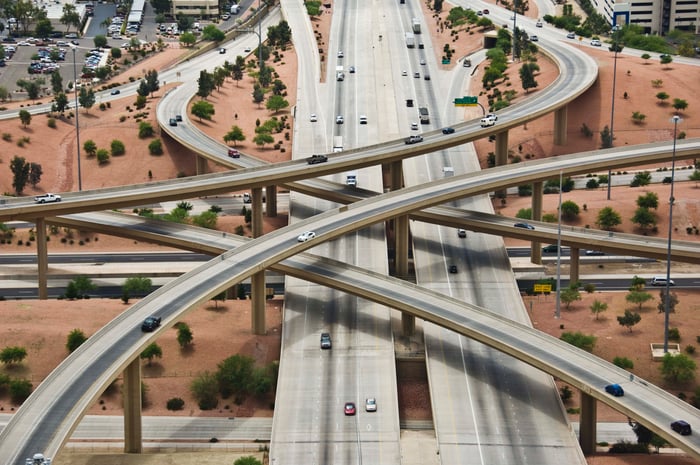 Not only is Amazon poised to benefit in a number of ways from the investments included in the bill, but coming out in support of the bill could help the company curry favor with a government that has been eyeing antitrust restrictions for Amazon and its fellow tech giants. More important are the components of the bill itself, which will support both Amazon's e-commerce business and its tech initiatives.

When you think of infrastructure, you probably think of roads, and the Biden plan indeed promises to modernize 20,000 miles of highway. It will also provide funding to fix thousands of bridges and upgrade ports, airports, and transit systems.

Arguably, no company will benefit more from such investment in transportation infrastructure than Amazon. Amazon is now the second-biggest U.S. company by revenue behind Walmart, bringing in $386 billion in revenue last year, $236 billion of which came from its North American e-commerce segment. Most of Amazon's e-commerce sales come from third-party sellers, but Amazon only records a small percentage of those sales as revenue, so its gross merchandise volume (GMV), or the sales facilitated on its platform, is much higher than $236 billion in North America. In terms of GMV, Amazon is likely to soon pass Walmart, if it hasn't already.

Expanding and improving highways, airports, and other transit systems will help Amazon achieve its goal of speedy delivery, and its promise of one-day delivery helps entice new sign-ups to Amazon Prime. Accelerating that further to same-day delivery would only increase the value proposition of Amazon Prime and the power of the loyalty program.

Ports have been a particular pain point in the global supply chain recently, and as e-commerce grows, that's only likely to get worse, making investments in ports especially valuable for Amazon. The Biden proposal aims to invest $17 billion in inland waterways, coastal ports, land ports of entry, and ferries.

Expanding broadband infrastructure is also a key focus of the plan, which says that by one definition there are 30 million Americans living in areas where broadband isn't available to provide internet access at minimally acceptable speeds. Those are all potential Amazon customers, not just for e-commerce, but also video streaming, its voice-activated technology Alexa, and even its cloud-computing business, Amazon Web Services.

Finally, the plan includes initiatives that dovetail with Amazon's own goals in electric vehicles (EVs), for example, where the administration has proposed building a national network of 500,000 EV chargers. Amazon itself has ordered 100,000 electric delivery vans from Rivian and acquired Zoox, an EV start-up, last year, showing its interest in the emerging industry.

Amazon can stomach the tax increase

Biden also aims to raise the corporate tax rate from 21% to 28%, and the administration has received a fair amount of pushback from corporations and even Democratic senators like West Virginia's Sen. Joe Manchin. However, here Amazon would also emerge a winner as the company can much more easily absorb a tax increase than many of its brick-and-mortar peers, and the company has demonstrated in the past that it's been able to pay substantially less in taxes than the statutory rate due to credits and deductions for things like investments in research and development, and stock-based compensation. In 2017 and 2018, the company paid no federal income tax, and though it paid $1.8 billion last year, that only represented 9% of its U.S. net income of $20.2 billion.

Between the tax increase and the investments in transit infrastructure and broadband, the infrastructure plan will not only benefit Amazon, it will also help the company extend its advantage over competitors, especially in areas like broadband. Given the proposal's extensive overlap with Amazon's own needs and priorities, coming out in support of it simply makes sense.