Please ensure Javascript is enabled for purposes of website accessibility
Log In Help Join The Motley Fool
Free Article Join Over 1 Million Premium Members And Get More In-Depth Stock Guidance and Research
By Howard Smith - Updated Apr 19, 2021 at 10:41AM

The motorcycle maker raised guidance after a strong quarter, and said it will fight an EU tariff.

Harley announced it earned $1.68 per share in the first quarter, significantly outpacing analyst estimates of $0.90 per share, according to MarketWatch. Revenue of $1.42 billion matched estimates, and marked a 10% jump over sales in the prior-year period. While global retail motorcycle sales grew 9% versus the year-ago period, bike sales in North America jumped 30%. 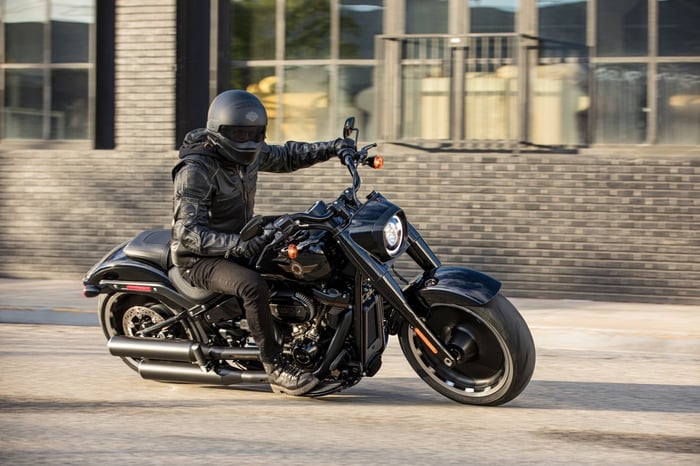 Lower sales elsewhere were attributed to continued COVID-19 restrictions, as well as an intentional reduction in dealers and other actions related to an ongoing restructuring strategy. The company also separately announced it will "vigorously defend" its stance related to European Union (EU) tariffs, which are set to impose a 56% import tariff for all Harley products within the EU, beginning in June.

Investors are shrugging off the potential impacts if the EU tariff stands, and focusing instead on the strong financial results. Last year, Harley announced a restructuring plan, dubbed "Rewire," intended to streamline the business. It included $42 million in restructuring costs and 700 total layoffs. The company then introduced a five-year plan, "Hardwire," to enhance sales and the competitive advantage of the iconic brand.

Jochen Zeitz, Harley chairman, president and CEO, said in a statement, "Harley-Davidson in 2021 is a significantly leaner, faster, and more efficient organization which is ready to win and successfully deliver on our 5-year Hardwire strategy."

With the earnings report, the company increased its guidance for the year, saying it now expects motorcycle segment revenue growth of 30% to 35% in 2021, up from a previous estimate of 20% to 25%.