Please ensure Javascript is enabled for purposes of website accessibility
Log In Help Join The Motley Fool
Free Article Join Over 1 Million Premium Members And Get More In-Depth Stock Guidance and Research
By James Brumley - Apr 20, 2021 at 8:01AM

The United States' second-biggest home improvement retailer hasn't been a key player in the contractor market, but buckle up -- it's coming.

On the surface it looks like little more than a courtesy notification meant to be read and forgotten ... a throwaway announcement made on a slow news day.

The fact is, however, the press release that home improvement retailer Lowe's (LOW 0.76%) posted last week about its new in-store offerings for professional contractors is kind of a big deal. It's the next chapter in an evolution that could grow the company's annual revenue by nearly a third of its current figure, and chip away at rival Home Depot's (HD -0.11%) revenue as a result. 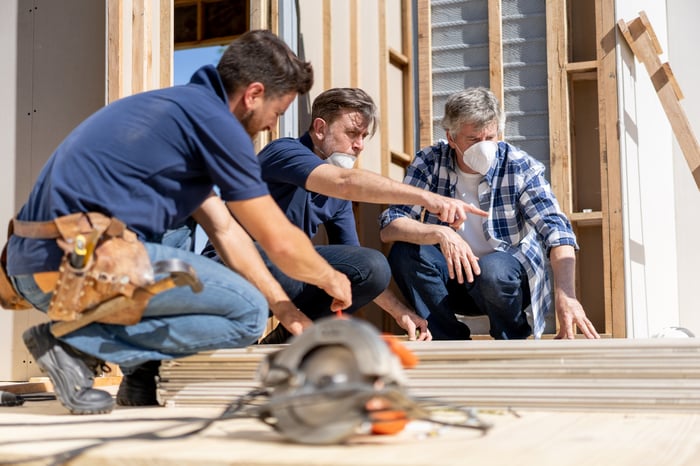 At nothing more than a passing glance, the two retailers look similar enough. While Home Depot is roughly twice as big measured by sales and market cap, lumber is lumber and paint is paint.

Dig deeper, though, and you'll find some stark differences. One of the biggest differences is how much of their respective top lines come from professional contractors like homebuilders, plumbers, and painters.

Although they only account for fewer than 5% of its customers, contractors are reportedly responsible for about 45% of Home Depot's sales. Meanwhile, Lowe's says these professionals only account for 20% to 25% of its business. If the latter retailer can pump that number up to 45% of revenue -- like Home Depot -- without alienating its consumer/DIY customers in the process, annual sales on the order of $80 million could swell to more than $100 million. Profits should grow similarly.

Such growth won't happen overnight. But Lowe's has been working diligently at developing this sliver of its business since 2018, when Marvin Ellison, then in his first few months as CEO, recognized the missed opportunity and took corrective action. In 2019, many Lowe's stores added or expanded staffing at dedicated contractor sales desks. That's the same year it improved the care and attention it gave to the inventory that contractors needed at all times. By the end of that year, it was adding contractor accounts to its customer roster by the thousands, generating clear sales growth as a result.

The COVID-19 pandemic forced the company to adapt its contractor-oriented initiative efforts, but not postpone or cancel them. In June, the company launched Lowe's for Pros JobSIGHT, which is a video chat tool that allows contractors to look at a job without being on site. A month later, the home improvement chain and HomeAdvisor teamed up to help professional contractors find leads for jobs. In August, it introduced a nationwide tool rental service. And the whole time, the home improvement outfit has been tweaking its online platform aimed specifically at contractors, including the launch of a loyalty program.

It's difficult to determine the exact impact these initiatives have made for the company. The pandemic has presented logistical challenges, but it also gave consumers time to start and finish home improvement projects ... which they did.

It's not difficult to say, however, the company's getting enough traction with its contractor-oriented programs to continue adding to them. Last week, Lowe's announced that trailer parking, phone-charging stations, air compressor refilling service, and easier access to the supplies contractors need most often are soon to be features at all of its locations.

Here's the part investors will like: Of the United States' highly fragmented $900 billion home improvement market, Lowe's says it only controls about 10%. Moreover, based on the numbers we know, Lowe's only collects about 5% of what professional contractors spend on materials making repairs and home improvements. That's a third of Home Depot's approximate 15% share of this piece of the market.

It's easier said than done to be sure. If you think Lowe's is finally serving the professional contractor market the right way, though, it's an enticing investment prospect.