Please ensure Javascript is enabled for purposes of website accessibility
Log In Help Join The Motley Fool
Free Article Join Over 1 Million Premium Members And Get More In-Depth Stock Guidance and Research
By Jim Halley - Apr 21, 2021 at 6:15AM

Gilead Sciences had a stellar 2020, but this year is looking a little more perilous.

Last year, Gilead Sciences (GILD 0.89%) showed that one drug can make a huge difference in a company's bottom line. Veklury, better known as remdesivir, earned emergency use authorization (EUA) and then full authorization from the U.S. Food and Drug Administration (FDA), and become the first treatment for COVID-19.

The company made $2.8 billion in sales from Veklury in 2020. It might have been even more had the World Health Organization (WHO) not recommended against its use last November. Without Veklury's revenue, the company would have seen sales fall by 3% compared to 2019, but with those sales, the company's overall revenue was up 10% year over year.

Now that vaccines are making a dent in the pandemic, there's no guarantee that Gilead will enjoy those kinds of numbers for Veklury this year, but that's not the end of the story. 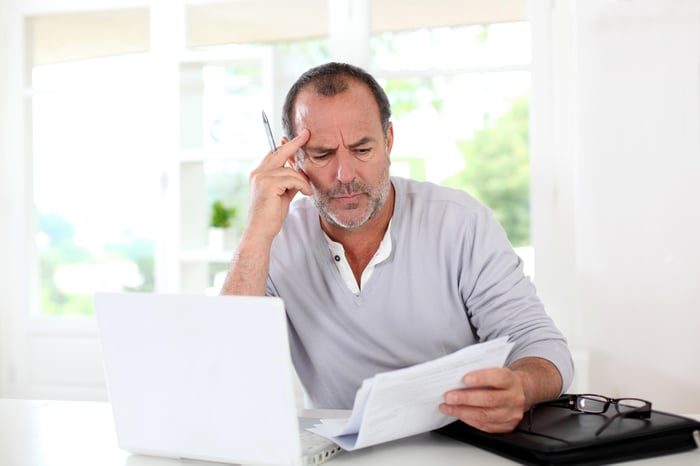 The company's franchise is its stable of HIV therapies, led by Truvada. The daily HIV preventative is also known as PrEP, or pre-exposure prophylaxis. For the year, the company's HIV sales were a reported $16.9 billion, up 3% compared to 2019. However, the company appears to be seeing some erosion of sales because of Truvada's loss of patent exclusivity in October. In the fourth quarter, HIV product sales were $4.3 billion, down 7% year over year, and a lot of that was due to a precipitous drop in Truvada-related sales, which were only $277 million in the quarter compared to $1.04 billion in the same period in 2019.

Gilead hopes another of its HIV drugs, Biktarvy, can pick up the slack of any decline by Truvada. Biktarvy, which is a combination medicine designed to lower the amount of HIV virus in a patient to undetectable levels, had $7.3 billion in annual sales in 2020, up 53% year over year.

Gilead's best chance of growth may be its oncology division, because it includes 27 clinical-stage programs for blood cancer and solid tumor therapies. The company bolstered its portfolio with its $21 billion purchase of Immunomedics, which was completed in October.

The deal gave Gilead access to Immunomedics' breast cancer treatment drug Trodelvy, which received accelerated approval earlier this month to treat locally advanced or metastatic triple-negative breast cancer. This is after a phase 3 study that determined the drug reduced the risk of death from the disease by 49% compared to chemotherapy alone.

On top of that, Trodelvy was just approved last week by the FDA to treat metastatic urothelial cancer, the most common type of bladder cancer. In his company's fourth-quarter earnings call, Gilead CEO Daniel O'Day said the company is looking at Trodelvy as a treatment for 10 different types of tumor.

Gilead also sees promise in two other cancer drugs, Tecartus and Yescarta, that came along when the company bought Kite Pharma in 2017. Tecartus was initially approved as a treatment for mantle cell lymphoma, but Gilead also is seeking approval to use it as a treatment for relapsed or refractory B-cell precursor acute lymphoblastic leukemia.

Yescarta, a CAR-T therapy already approved for patients with large B-cell lymphoma, was just given the nod by the FDA to be used as a treatment of adults with relapsed or refractory follicular lymphoma after two or more lines of systemic therapy. 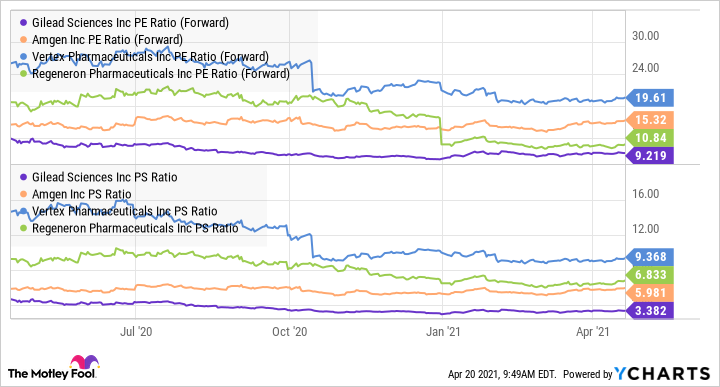 A dividend that tips the scales

In some ways, Gilead is a value stock masquerading as a growth stock. It has a solid dividend to go with a favorable forward price-to-earnings (P/E) ratio and price-to-sales (P/S) ratio compared to other biotech competitors such as Amgen, Vertex Pharmaceuticals, or Regeneron Pharmaceuticals.

The beauty of Gilead's dividend is that it rewards investors who are willing to wait for its pipeline to pay off. With all the potential there, I think it's an easy choice to buy in April.