Please ensure Javascript is enabled for purposes of website accessibility
Log In Help Join The Motley Fool
Free Article Join Over 1 Million Premium Members And Get More In-Depth Stock Guidance and Research
By Dave Kovaleski - Updated Apr 23, 2021 at 11:43AM

This stock has returned almost 25% annually over the past 10 years.

It has been a crazy 15 or so months in the stock market. We've had a crash, a comeback, an overvalued tech sector, a value resurgence, and meme stocks, to name just some of the mini-trends that have emerged. Given all the volatility and shifting winds, many investors are seeking out safe havens for their investment dollars -- stocks with limited volatility regardless of the environment, and steady, sustainable returns.

Generally speaking, a safe stock is one that is less affected by cyclical market trends, has steady and growing revenue in all cycles, offers a rising and sustainable dividend, and boasts strong competitive advantages that allow it to maintain and grow its market share. Stocks don't get much safer or steadier than S&P Global (SPGI 1.86%). 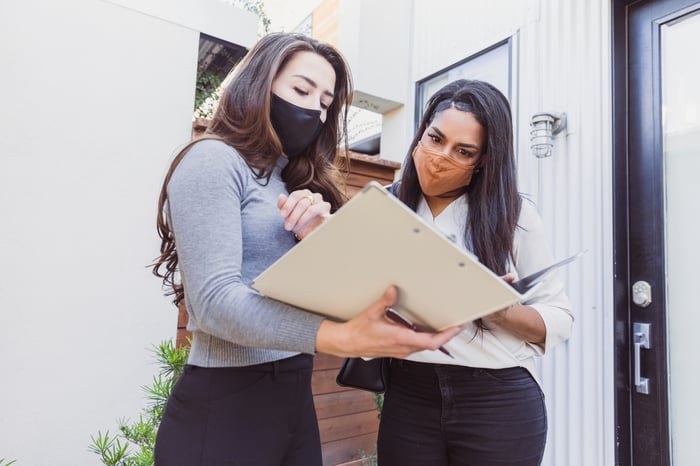 S&P Global is a financial-services company that's probably most famous as the business behind the S&P 500 market index. There's more to this story, and I'll get to that shortly. But first, how about some evidence of its stability?

Just looking at S&P Global's returns over the past decade will give you a broad view of how consistent it's been. The stock has not had a negative annual return in 13 years, the last time being in 2008. That includes a market-beating 21% gain through last year's turbulence.

Over the past 10 years, S&P Global has grown from about $42 per share to roughly $388 per share, which is an 857% gain overall and an annualized return around 25% -- again, with no negative years. That far exceeds the broader S&P 500, which had a total return of a little more than 200% over the same period.

S&P Global's stock is up another 18% this year, at Friday's prices. Let's dig deeper into what's driving that level of consistency.

Two moats are better than one

It starts with its competitive advantages. S&P Global has not one, but two moats -- which means its market share is protected in ways that make it hard for others to break through.

S&P Global has four major lines of business, led by its credit ratings business, which accounts for 48% of its revenue. S&P Global has long been the market leader, along with Moody's, both of which have a 40% market share. The third largest player, Fitch, owns about 15% of the market, so that's 95% between the three of them. There is little chance of that changing, due to the nature of the credit ratings business. Only a few trusted sources are required -- more than that and their value is watered down. Plus, the barriers to entry for new competitors are high, with major regulatory hurdles and infrastructure needs. But beyond that, the brand name and reputation of the big three make it extremely hard for any new entrant to compete.

S&P Global has three other business lines. One is its market intelligence business, through which it provides data and research for investment professionals, while another is Platts, a source for market data for the energy and commodities industries. Market intelligence is its next-largest revenue generator, accounting for about 28% of the company's income in 2020, while Platts generated about 11.7%. Both of these businesses generate revenue primarily through subscriptions, a steady and repeatable source. They also tend to do well in down markets when credit issuance may not be as high. If you go back to 2018, the credit ratings business was down 4%, but revenue for market intelligence and Platts was up 9% and 5%, respectively.

The other economic moat that S&P Global boasts is its index business. S&P Global, of course, owns the S&P 500 and all its associated benchmarks, and it owns the Dow Jones Industrial Average through a joint partnership. As such, it is one of three primary index providers in the world, with a titanium brand and very few competitors. This generates about 13% of the company's revenue, which comes through fees for listing on the index as well as for licensing its indexes to asset managers to use in their exchange-traded funds (ETFs), index funds, and other products. The more assets in the fund, the more S&P Global gets in fee income.

The stability of this company is exemplified by its consistent dividend. S&P Global is one of only 65 stocks in the S&P 500 that have increased their dividend each year for more than 25 years, better known as the Dividend Aristocrats. S&P Global has actually increased its dividend every year for 46 years in a row; only 21 companies have longer streaks. The increasing dividend is testament to its ability to consistently generate rising profits over the long term.

With S&P Global's status in its markets not about to change anytime soon, this is one stock you can feel pretty safe investing in without much drama.

This Rock-Solid Dividend Aristocrat Hasn't Been This Cheap Since 2019: Is It a Buy?

How This Megamerger Created a Cash Cow

Is This the Best Dividend Aristocrat for the Next Decade?