Please ensure Javascript is enabled for purposes of website accessibility
Log In Help Join The Motley Fool
Free Article Join Over 1 Million Premium Members And Get More In-Depth Stock Guidance and Research
By Reuben Gregg Brewer - Apr 29, 2021 at 10:43AM

VEREIT is a pretty big landlord, but Realty Income is even bigger. And now, after agreeing to buy VEREIT, Realty Income will be a giant.

Shares of real estate investment trust (REIT) VEREIT (VER) rose a dramatic 19% as trading got under way on April 29. The big news driving the advance is that net lease peer Realty Income (O 0.36%) is buying it out in an all-stock deal. Interestingly, however, Realty Income's shares rose, too, gaining about 3%. Normally the shares of the buyer tend to decline. It looks like Wall Street really likes this deal.

VEREIT is one of the largest net lease REITs, with around 3,800 properties. It has basically just completed a multi-year turnaround effort that started after an accounting scandal. One theory during the turnaround was that VEREIT would be sold, but with such a large portfolio there were few names capable of taking on the task. In fact, the only name that made sense was Realty Income, which owns a complementary portfolio of around 6,600 assets. And now it looks like that's exactly what has happened, with VEREIT shareholders set to get 0.705 shares of Realty Income for every VEREIT share they own. 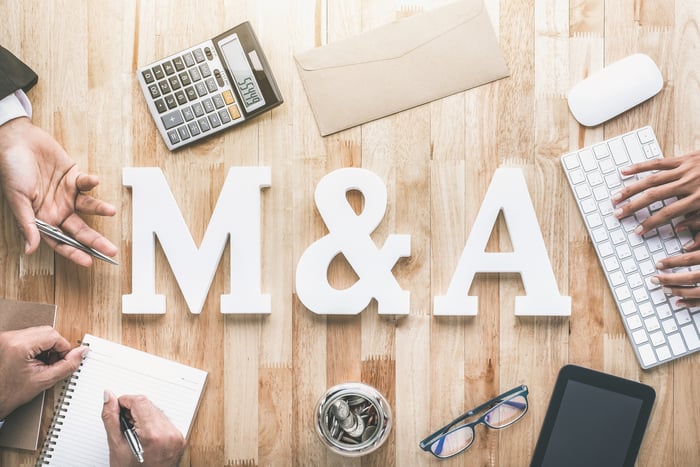 In many ways this is a great outcome for investors in VEREIT, who will now own 30% of net lease bellwether Realty Income. In fact, the dividend VEREIT investors receive is expected to be higher after the acquisition. Realty Income, meanwhile, will benefit from increased diversification in its portfolio and enhanced scale, among other things. The combined company's office assets will also be spun off, allowing Realty Income to pare down in an area that it didn't particularly want to be in anymore.

It isn't very often that mergers look like they will end up being win/win deals. But Realty Income buying VEREIT certainly seems to be just such a situation and investors are rewarding both REITs accordingly. If you own VEREIT you need to consider whether or not you want to capture the big price move or stick around to be a Realty Income shareholder. Most will probably want to stick around.