Please ensure Javascript is enabled for purposes of website accessibility
Log In Help Join The Motley Fool
Free Article Join Over 1 Million Premium Members And Get More In-Depth Stock Guidance and Research
By Jennifer Saibil - Apr 30, 2021 at 9:55AM

Roku is part of the streaming revolution. This is why Cathie Wood loves it, and why you should pay attention.

Cathie Wood, founder of investment management firm ARK Invest and highly watched money manager, is known for her disruptive stock picks. One of her holdings is streaming company Roku (ROKU 9.71%), which makes up 5.2% of the ARK Innovation ETF (ARKK 9.10%), an exchange-traded fund.

But not all fund stocks are right for individual investors, and not all of Wood's picks, such as Coinbase Global, are for the faint of heart. That said, should Roku be on your watch list? 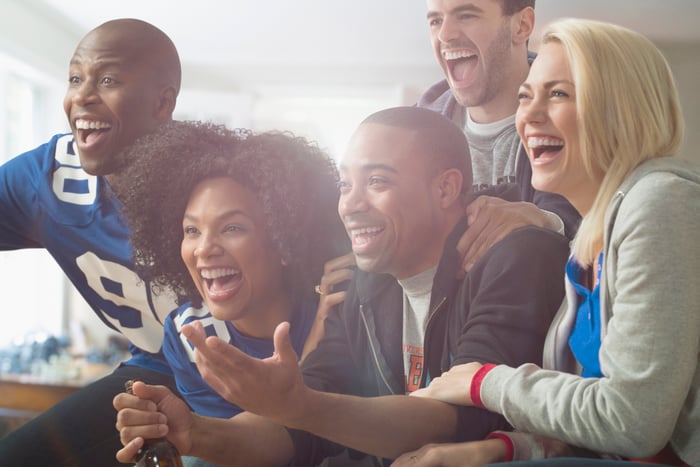 The streaming revolution is here

Netflix (NFLX 3.29%) remains the leader in streaming, ending the 2021 first quarter with 208 million subscribers and $7 billion in revenue. Disney (DIS 1.08%) is behind it, with more than 150 million paid subscribers between its premium sites and $3.5 billion in sales for the direct-to-consumer segment.

Roku makes streaming devices, so the more people are signing up for streaming subscriptions, the more Roku has to gain. It's not the only device maker out there, but it's the leading seller, with its operating system accounting for 38% of total U.S. streaming device sales in 2020.

The company also makes money from selling advertisements on its free site, which is its biggest growth driver right now. Total revenue grew 58% in the fourth quarter, but that was driven by growth in platform revenue, which increased 85% and represented 72% of the total.

And trends are continuing to shift in that direction. As viewers switch over to streaming, advertisers are going along with them. Streaming hours grew 55% in Q4, and all of those hours mean more ad impressions, and more ad revenue for Roku.

Even more in its favor, Roku finally made the announcement last week that watchers have been anticipating: It will now create its own original content. It got a leg up on that when it acquired failed upstart Quibi's content back in January, to be rebranded as Roku Originals. This will also be the name for Roku's own original content, under which it will release 75 films in 2021. That comes close to Netflix's 100 films slated for 2021 and Disney's commitment to 100 pieces of content each year under its umbrella brands.

This is an exciting development for a few reasons. One, exclusive content is an attractive feature for gaining new customers. It can fuel device sales, since as more people become familiar with and loyal to the brand, they're more likely to invest in the top-selling streaming devices. Next, it means that Roku doesn't have to share its ad sales with content producers that allow it to stream their content, such as Peacock owner Comcast. For instance, Roku let viewers know this week that it will stop streaming YouTube TV after a disagreement with parent company Alphabet's Google (GOOG 4.41%) (GOOGL 4.16%). As Roku develops more original content, it will be less beholden to other streaming services.

Finally, it can add overall viewers, which will increase ad impressions and therefore make it more advertising revenue.

If Roku was doing well before, this easily increases its value.

A stock for everyone

There are some stocks that Wood holds, such as Coinbase and Tesla, that are probably above the risk levels for the value or beginner investor. But I see Roku as a great pick for anyone interested in growing their portfolio. It has a vast upside with minimal risk, which is why it can appeal to almost any type of investor.

Roku stock has gained over 1,000% over the past three years, and for good reason. It has the potential to do that again, between its well-developed products and services, and trends moving in the right direction. It has also posted surprise profits in the last two quarters, and I'll be watching to see what happens in next week's earnings report.