Please ensure Javascript is enabled for purposes of website accessibility
Log In Help Join The Motley Fool
Free Article Join Over 1 Million Premium Members And Get More In-Depth Stock Guidance and Research
By Rachel Warren - Apr 30, 2021 at 10:30AM

Investors just can't get enough of these top-performing stocks in 2021.

Whether you're new to trading stocks or already own a well-rounded basket of shares, growth investing is one of many strategies you can utilize to maximize your returns and optimize your portfolio growth. Yet finding stocks that can not only deliver superior earnings and investor returns, but continue doing so over the long haul, isn't always easy.

Today, we're going to take a look at three very different companies -- a popular e-commerce stock, a thriving pot stock, and a top-notch tech stock. So, if you're ready to give your portfolio a boost with some winning growth plays that can fuel optimal returns for decades to come, consider these three. 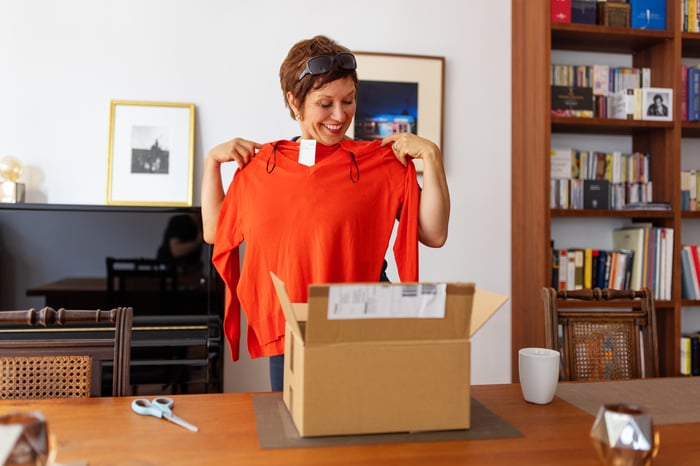 The global e-commerce industry is growing at an astonishing pace. Companies like Shopify (SHOP 8.25%), which provide the platforms that entrepreneurs leverage to build their online stores and that consumers then use to buy from them, reflect the astronomical surge of this behemoth market.

2020 was a huge year in the world of e-commerce, building on a track record of fast-paced growth in the years preceding the pandemic. According to ResearchandMarkets.com, the global e-commerce market was worth about $1.8 trillion in 2019, but is expected to grow to more than $3 trillion by 2023.

Shares of Shopify have spiked by approximately 95% over the past 12 months. The company's balance sheet has also recorded remarkable growth throughout the pandemic, which isn't surprising given that Shopify is one of the leading e-commerce platforms in the world, with a market share of roughly 18% in the U.S. alone.

In 2020, Shopify reported 86% total revenue growth, while revenue from its merchant solutions and subscription solutions segments surged by 116% and 41%, respectively. In addition, Shopify's gross merchandise volume for the year increased 96% from 2019. The company's full-year report also noted that "the number of consumers buying from Shopify merchants grew 52% from 2019 to nearly 457 million, an acceleration from the 38% year-over-year growth in consumers buying from Shopify merchants in 2019."

The company took a number of crucial steps in 2020 to increase its platform's outreach to both merchants and consumers. These included two major launches -- one being its new point-of-sale (POS) system and the other its "all-in-one mobile shopping assistant," called Shop. Shopify also boosted its payment options for merchants last year, most notably with its launch of a new integration with Alipay, which draws over 1 billion active users per year. (Alipay's parent company is Ant Group, an affiliate company of the Chinese e-commerce giant Alibaba Group Holding.)

Shopify reported its financial results for the first quarter of 2021 on April 28. Investors were clearly pleased, as the stock marked double-digit gains that day. During the quarter, Shopify's revenue shot up 110% from the year-ago period, with subscriptions solutions revenue increasing 71% and merchant solutions revenue 137%. Gross merchandise volume for the quarter rocketed up by 114%, and monthly recurring revenue rose 62% year over year.

Shopify's stellar growth throughout the pandemic is evidence of the strength of its business model and its expansive footprint in the broader e-commerce market. As this market continues to grow in the years ahead, shareholders could see unbelievable profits from Shopify's similarly monumental growth story.

If you want to invest in the marijuana craze, few stocks can complete with the catalysts for long-term growth that GrowGeneration (GRWG 12.93%) can boast. Over the past year, despite the mixed performance of many popular marijuana stocks, shares of GrowGeneration have marked gains of nearly 850%.

GrowGeneration currently has 53 hydroponic and gardening stores open across the U.S. that provide equipment vital for growers to cultivate cannabis. The company has its largest footprint in California, where it owns and operates 18 store locations. GrowGeneration's stores are spread across nearly a dozen other states as well, including Colorado, Michigan, Oklahoma, and Arizona.

Management recently announced that GrowGeneration will soon be expanding to the medical cannabis market in Mississippi. The company has signed a lease for a 40,000-square-foot facility in Jackson that will serve as its first garden center in the state. There's plenty of market-share opportunity for GrowGeneration in Mississippi, where legislation to legalize medical marijuana was just passed in November (though at the moment, it only applies to certain medical conditions). And while marijuana possession is decriminalized in the state, it's still forbidden for recreational purposes.

GrowGeneration's revenue surged by 143% in 2020, and its net income shot up 308% from 2019. Both same-store sales and e-commerce sales grew at a rapid pace last year, by 63% and 123% respectively. Management has forecast that the company will generate between $415 million and $430 million in revenue for the full year 2021, which would be as much as a 123% increase from its 2020 revenue of $193 million. GrowGeneration has plenty of upside potential left to explore as it expands its business and market share, and investors may want to think about buying shares of this compelling pot stock now before it spikes even higher.

A classic pick for growth investors, Facebook's (META 5.10%) prospects as a long-term investment keep getting better and better. The company is a member of the elite group of tech stocks known as FAANG, and currently captures a whopping 61% share of all social-media site visits in the U.S. Facebook's stellar competitive advantage makes it an unstoppable stock to own in all market environments.

The company proved its mettle yet again with a rock-solid first-quarter earnings report on April 28, and by market close the following day, shares had climbed to an all-time high. During the three-month period, Facebook's total revenue surged 48% and its net income shot up by an eye-popping 94% on a year-over-year basis.

Facebook also reported that as of the end of March, its monthly active users grew by 10% from the year-ago period, and its "family" of monthly active users (across all the company's apps) by 15%. In the month of March, the platform's daily active users were up 8% year over year, while the "family" number was up 15%. CFO David Wehner said, "We are pleased with the strength of our advertising revenue growth in the first quarter of 2021, which was driven by a 30% year-over-year increase in the average price per ad and a 12% increase in the number of ads delivered." This follows on the heels of Facebook's strong performance in 2020, during which it reported revenue growth of 22% and its bottom line rose 58%.

Analysts are projecting that Facebook will continue delivering average annual earnings growth higher than 10% for the next five years. They have also set Facebook's high price target at $418, which would represent a roughly 30% upside from where the stock is currently trading. Facebook is the type of stock you can buy and hold for a lifetime, and there's never been a better time than right now to add this company to your basket of investments.