Please ensure Javascript is enabled for purposes of website accessibility
Log In Help Join The Motley Fool
Free Article Join Over 1 Million Premium Members And Get More In-Depth Stock Guidance and Research
By Jeremy Bowman - May 4, 2021 at 7:51PM

The bank had a better-than-expected earnings report.

Shares of Wells Fargo (WFC 1.92%) moved higher last month after the nation's No. 4 bank by assets posted a strong first-quarter earnings report, and continued to rebound on broader hopes for the economic recovery.

According to data from S&P Global Market Intelligence, the stock finished the month up 15%. As you can see from the chart below, most of the gains came in the middle of the month when Wells Fargo's earnings report came out: 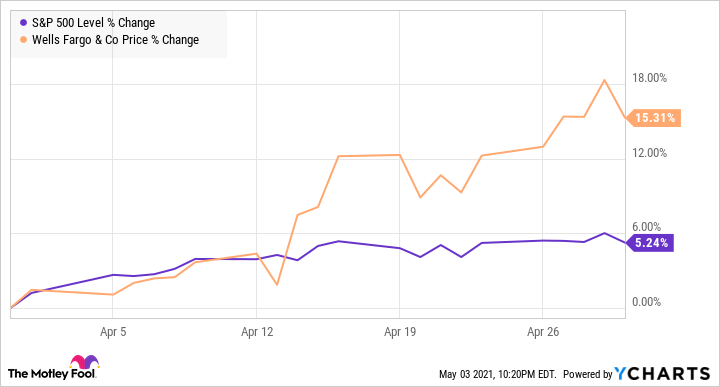 Wells Fargo stock tracked with the S&P 500 for most of the first half of the month, as it benefited from increasing optimism for the economic reopening, and as it got some bullish analyst notes.

Shares rose 5.5% on April 14 when the company reported fourth-quarter earnings, and continued to rise from there. Wells Fargo handily beat estimates with revenue rising 2% to $18.1 billion, ahead of expectations for $17.5 billion. On the bottom line, earnings per share jumped from just a penny in the quarter a year ago, as its performance was deeply impacted by the pandemic, to $1.05, easily beating estimates of $0.70. The bank benefited from releasing $1.6 billion in loan loss reserves, showing that the impact of the pandemic wasn't as bad as expected.

CEO Charlie Scharf said: "Charge-offs are at historic lows and we are making changes to improve our operations and efficiency, but low interest rates and tepid loan demand continued to be a headwind for us in the quarter."

Wells Fargo has taken steps to move beyond the scandals that rocked the company for a few years, slimming down and strengthening controls. The company is selling off its asset management and corporate trust businesses, and has installed chief risk officers at each of its six business lines to step up compliance.

Though the bank stock is up 50% this year, there are a number of positive catalysts that could drive the stock higher. One is the Federal Reserve's removal of its asset cap, which could happen by the end of the year.

Another is the return of its dividend to former levels -- $0.51, from just $0.10 currently. With a quarterly payout of $0.51, it would offer a 4.5% yield at today's prices. Not only would a dividend hike reward shareholders, but it would push the stock higher as well.