Please ensure Javascript is enabled for purposes of website accessibility
Log In Help Join The Motley Fool
Free Article Join Over 1 Million Premium Members And Get More In-Depth Stock Guidance and Research
By Taylor Carmichael - May 5, 2021 at 8:29AM

The video gaming industry is probably bigger than you think it is. Companies in the industry generate $180 billion in annual revenue worldwide. When compared with other entertainment sectors, that's bigger than the film industry ($100 billion) and the sports industry ($75 billion) combined. While gaming hardware being sold by Sony, Microsoft, and Nintendo makes up a significant percentage of that revenue, the vast majority (roughly $167 billion) is related to software sales.

There are numerous software companies in this sector, many of them private. Among the highly successful public companies on the software side are names like Activision Blizzard, Electronic Arts, Take-Two Interactive, and Ubisoft.

Two video game-related investments I particularly like are Sea Limited (SE 0.15%) and Unity Software (U 7.78%). Here's why. 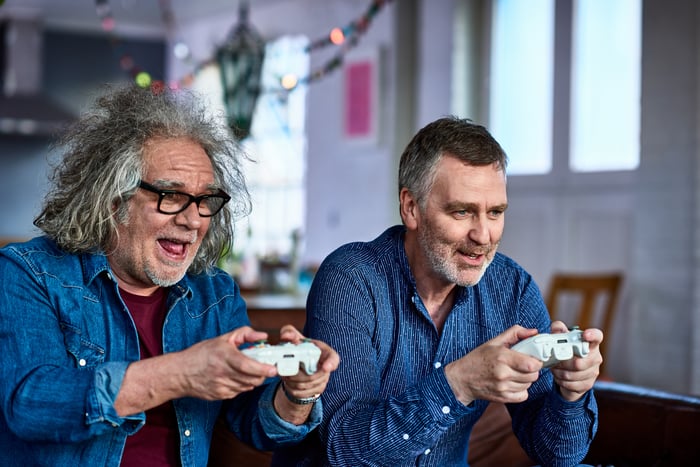 1. Sea Limited is a platform company

When Sea first began, it was a video gaming company called Garena, short for "Gaming Arena." It's a virtual place to play and watch video games across southeast Asia (and now South America as well). The most famous video game the company introduced is Free Fire, a battle royale mobile game. It's a free game, but many addicted customers spend within the game anyway, buying additional weapons or character improvements. That's why Sea's "free game" brought in more than $2 billion in revenue in 2020.

As CEO Forrest Li said on a conference call, "Free Fire was once again a key driver of Garena's outperformance. According to App Annie, it continues to be the highest-grossing mobile game in Latin America and Southeast Asia in the fourth quarter, as well as the full year of 2020. It has maintained the top ranking for six consecutive quarters."

The popularity of the game continues to astound. As Li put it, "We're also pleased to share that Free Fire was once again the most downloaded mobile game in the world in 2020, according to App Annie. This is the second year in a row that Free Fire was ranked first globally."

One major difference between Sea and all its competitors is when these companies were founded. Li created Sea in 2009, which is important because it's after the introduction of the iPhone in 2007. Not surprisingly, Sea has always focused on mobile games. The major American (and French) games companies were all started back in the 20th century, and have always focused on creating games for the various hardware platforms. They have been late to the mobile revolution, and have been trying to play catch-up, mostly by acquisition.

Founding dates based on reporting from Wikipedia. (Activision and Blizzard merged in 2008.)

Sea has had a major head start in mobile games, which is its killer advantage. As Motley Fool Rulebreaker fans would say, the company was a first mover in an important, emerging industry. But what's really killing the competition is how Sea took advantage of its head start and locked in its popularity with its mobile audience, using the revenue generated to fund expansion into new revenue opportunities such as opening up an e-commerce site, Shopee, and creating a mobile payments platform, Sea Money. Now the network effect is helping to cement its position as the top internet company in Southeast Asia.

2. Unity Software is a distributor, not a developer

Unlike Sea and the rest of the software brigade, Unity Software does not develop any video games itself. Instead, Unity provides a suite of advanced software tools to help other companies more efficiently create video games. Unity also provides distribution for smaller studios that create fun games for our smartphones. Unity enjoys a duopoly with competitor Epic Games in that regard.

While Epic Games is best known publicly for its popular Fortnite game, in the industry Epic is best known for its Unreal engine, the software that competes with Unity in providing tools for game developers. While Unreal is known for its high-end computer graphics, Unity's focus has been on simpler tools that do the same thing. Because of its simplicity, Unity is generally winning on the mobile side. In the fourth quarter, Unity management reported that 71% of the top 1,000 mobile games were made on its platform. That's amazing dominance in mobile, the fastest-growing segment of the gaming industry.

As a distributor, Unity will make a lot of money in the gaming industry with much less risk than content creators face. Studios can spend millions of dollars introducing a new game and quickly go out of business if the game fails to achieve any popularity. A distributor like Unity makes its profits as the entire industry advances, earning a share of all sales from the games using its platform, whether they succeed or not.

It's the platform, in other words, that gives Unity its killer advantage. And this platform also has a powerful moat. Software developers are trained on specific tools. For a new threat to Unity to emerge, the technological advance would have to be so amazing that industry veterans would spend the time to "go back to school" and learn a whole new system. Right now, most software developers have a favorite between Unity and Epic's Unreal. Some are equally adept with both technologies. But few would be interested in spending months learning a third system unless they really had to do it.

What makes Unity a particularly exciting investment is that it's the leading software engine in the creation of virtual reality (VR) and augmented reality (AR) games. While this is a tiny segment of the industry right now, it's expected to be massive in the next decade or two because its applications stretch beyond just gaming. For instance, Autodesk is now using Unity's tools in the architecture vertical, and Volkswagen used Unity's software to build an online showroom for its automobiles.

While there will be many winners in the gaming industry, Sea Limited and Unity are particularly strong investments because these companies enjoy powerful network effects. Indeed, both of these companies are so strong right now that they are using their leadership roles in gaming software in order to seize market share in other industries as well. That will help these stocks reward investors for many years to come.

Don't Let This 1 Decision Sour You on Sea Limited