Augmented reality (AR), like virtual reality (VR), is a market with a lot of hype. Allied Market Research estimates the combined market for AR and VR will reach $571 billion by 2025. Meanwhile, Goldman Sachs estimates the two markets will be worth $80 billion in that time frame. That's a sizable $491 billion difference in those two forecasts!

Right now the market for VR is pretty specific: it's limited to games. AR, however, has many possible applications outside of gaming. This is partially why the market projections are so wildly different. Nobody knows for sure how large AR will be, how fast it will get here, or which markets it will disrupt.

So what's an investor to do? One idea is to buy dominant platform stocks that will be able to take advantage of augmented reality if and when the technology becomes widely adopted. Two strong stocks that come to mind are Apple (NASDAQ:AAPL) and Autodesk (NASDAQ:ADSK). 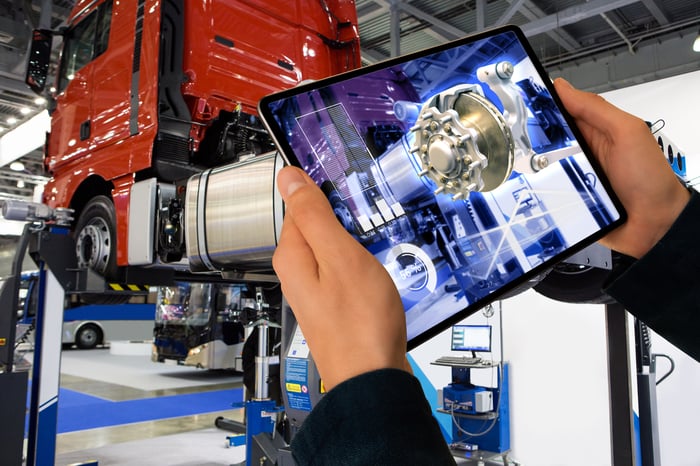 Apple is ready for AR dominance

Several years ago, Alphabet subsidiary Google tried to introduce AR to the market with its Google Glass. The device was dead on arrival. It was nerdy and expensive and nobody wanted it. So that's a lesson for everybody. Augmented reality might be cool technology, but that's not enough. The device itself has to be compelling to average consumers.

Unlike Google, Apple is, first and foremost, a device company. Indeed, Apple has achieved device dominance. At the beginning of 2019, the company reported that there are 900 million active iPhones out in the world. If we include iPad numbers, that number of active Apple mobile devices out in the world is approximately 1.2 billion. So Apple already has the devices; now it just needs the AR.

Apple's CEO Tim Cook is one of the big believers in augmented reality. In an HBO documentary, he said, "In a few years, we're not going to be able to imagine our lives without [AR]. It's that profound a platform."  In an interview with Vogue, Cook said, "I don't think there is any sector or industry that will be untouched by AR."

With that attitude from the CEO, it's not surprising that Apple is getting ready for an AR tsunami. In 2017 the company introduced a group of AR software development tools, called ARKit, and followed it up with ARKit 2.0 last year. These tools allow start-ups and other developers to start building AR applications.

Apple's huge ecosystem of devices gives the company a serious advantage over any rivals. Many companies, both small and large, are working on AR apps for Apple devices.

Maybe one day Apple introduces its own AR product, or maybe it doesn't. A set of AR eyeglasses that syncs to the iPhone is a wonderful idea, if it works. Or Apple could simply use AR technology to spur its customer base into buying updated versions of iPhones and iPads. Either way, Apple should win with AR.

One of the more famous examples of augmented reality is Niantic's Pokemon Go, the game that started a craze a few years ago. However, what's perhaps more interesting than the game itself is the AR software that makes those incredible effects possible. Unity Technologies, recently valued at almost $6 billion by venture capitalists, provides that software. Unity plans on going public in the first half of 2020, according to the website Cheddar.

Unity claims that more than half of all mobile games are built using its software, making the company a big competitor to the Unreal Engine of Epic Games. Unity has made big investments in AR and VR gaming. Sixty percent of all augmented reality and virtual reality content is made with its engine.

While AR investors can't buy shares of Unity Technologies (yet), what we can do now is buy shares of Autodesk. Autodesk is the leading platform for 3D modeling and computer-aided design (CAD), and Unity is partnering with the company to bring AR and VR technologies into that platform. The two companies have been collaborating for a couple of years now. Now designers, architects and engineers can take their model from Autodesk's Revit, and with one click can turn it into a real-time, 3D immersive experience.

Aligning itself with the market leader in AR gaming software is a smart move for Autodesk. The company is a massive presence across the fields of engineering and architecture.

In the future, augmented reality will help designers visualize a project before a lot of money is spent in the real world. Improved visualization will help speed up construction and make it less expensive. As the AR market expands and grows out of its gaming niche, Autodesk will be right at the center of one of those big shifts.

While it's still early days in the transition to augmented reality, both Apple and Autodesk have dominant platforms that give them a strong advantage over any rivals. When AR crosses the chasm into mass acceptance, both companies should be right there, ready and able to profit.