If reports hold true, Apple's 2020 iPhones could mark an inflection point in the company's AR efforts.

Apple (AAPL 1.62%) has been talking up augmented reality (AR) for a while. More than that, the company has done a significant amount of hardware and software work to optimize some of its more recent iPhone and iPad devices for augmented reality use cases.

Apple CEO Tim Cook was quoted in 2017 as saying that AR is poised to "change everything."

For instance, Apple released the second version of a software development kit called ARKit 2.0 back in June and is likely to launch a third-generation version at its Worldwide Developers Conference later this year. ARKit allows developers to more easily build AR applications for Apple's iPhones and iPads. 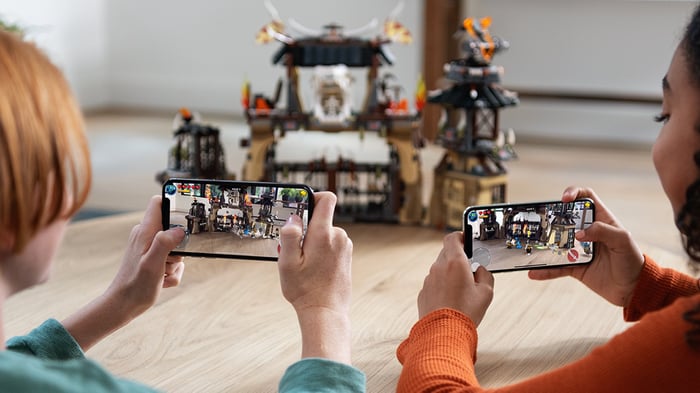 AR apps can now integrate shared experiences and persistent AR, which allow users to leave virtual objects in the real world and return to them, as is, at a later time. Image source: Apple

Additionally, Apple indicated in its press release announcing the iPhone 8 Plus that the rear cameras on the device were "custom tuned for the ultimate AR experience," stating that "[each] camera is individually calibrated, with new gyroscopes and accelerometers for accurate motion tracking."

According to a report from Bloomberg, it looks like Apple is set to really crank up its AR game with the iPhones that it will introduce in 2020. Let's take a closer look at what the publication had to say and figure out what that means for the business.

3D sensing on the rear camera

The publication claims that Apple's 2020 iPhones could come with 3D-sensing rear cameras that are "designed to scan the environment to create three-dimensional reconstructions of the real world." It'll reportedly "work up to about 15 feet from the device."

Bloomberg then goes on to say that "[the] laser-powered 3-D camera would enhance augmented reality on the iPhone, allowing for more accurate depth perception and placement of virtual objects."

On Apple's most recent earnings call, CEO Tim Cook said that iPhone users are "holding onto their older iPhones a bit longer than in the past," citing that, as well as "macroeconomic factors," led iPhone revenues to plummet 15% last quarter.

Apple's job, then, is to give customers compelling reasons to buy new devices. Of course, the company improves upon things like processing power, camera image quality, screen quality, and so on. But, as Apple is witnessing, these don't seem to be enough to get iPhone users to accelerate their purchases of new iPhones.

What could get iPhone buyers to want to upgrade their devices more rapidly is the introduction of fundamentally new and compelling use cases. If a new iPhone can fundamentally do something that previous models can't, and if that use case is really compelling (new features for the sake of novelty probably aren't going to cut it, as Apple's failed 3D Touch technology illustrated), then that could provide customers with incentive to upgrade.

According to Bloomberg, another thing to keep in mind is that while the iPhones that Apple launches later this year will "otherwise look similar to the current models," the iPhones coming in 2020 will incorporate, in addition to the rear-facing camera, "larger changes ... to accommodate plans for 5G networking capabilities."

The potential form factor change and new 3D rear-facing camera, coupled with all of the upgrades that Apple typically delivers with each new iPhone, could result in a product compelling enough to catalyze upgrade activity and ultimately help drive a longer-term rebound in the company's iPhone business. After Apple's dismal iPhone performance last quarter, that rebound can't come soon enough.