Then, during its annual developers conference in early June, Apple announced a next-generation version of ARKit, known as ARKit 2, as part of the company's upcoming iOS 12 operating system. 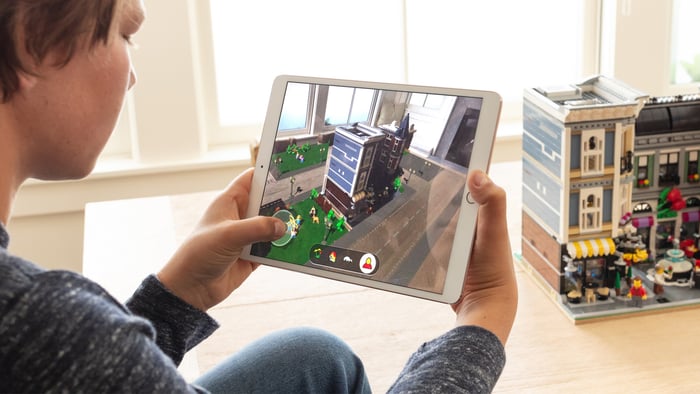 ARKit 2 builds upon the original ARKit by adding many new and compelling features. Here's an excerpt from Apple's press release announcing ARKit 2 :

Apple today introduced ARKit 2, a platform that allows developers to integrate shared experiences, persistent AR experiences tied to a specific location, object detection and image tracking to make AR apps even more dynamic. Apple is also unveiling the Measure app for iOS, which uses AR to quickly gauge the size of real-world objects, as well as a new open file format with iOS 12, usdz, which is designed to more deeply integrate AR throughout iOS and make AR objects available across the ecosystem of Apple apps.

It's clear that Apple's betting big on augmented reality as an emerging use case on future iOS devices, but the question that investors should ask themselves is "Why?" Here's my take on it.

Augmented reality applications require a substantial amount of processing power. After all, superimposing realistically rendered objects onto reality and performing all of the calculations required to make sure that reality is convincingly augmented isn't trivial.

It requires a lot graphics processor performance and a ton of CPU performance, too -- two areas where Apple makes impressive strides each year with each generation of its new mobile chips.

Over time, these applications could become so complex that Apple will need to substantially increase the amount of system memory that it incorporates in its devices (although given that memory prices are still through the roof, that could hurt Apple's margins considerably).

Moreover, as developers gain more experience in building truly useful and compelling augmented reality applications, it might not be long before they start really pushing the limits of what current iOS hardware can do -- and the best, most creative developers may even start clamoring for even bigger generational performance improvements.

The point, though, is that augmented reality applications have the potential to raise the bar for the kind of performance and capabilities that customers expect from their smartphones.

That, in my view, could be a huge positive for Apple. One of the narratives that's emerged over the years is that the upgrade cycles of Apple's core products, such as the iPhone and the iPad, have lengthened. Those upgrade cycles have likely lengthened because smartphone and tablet hardware has largely become adequate enough to perform the vast majority of tasks that typical device users expect.

After all, there's only so much a company can do to upgrade the user experience of viewing mobile webpages, setting reminders, playing casual games, and watching videos.

When common use cases stop requiring new, more capable hardware, it becomes harder for companies to convince consumers to buy new devices. Of course, mobile devices are generally refined in other ways such as form factor, camera quality, and the types of sensors embedded in them, but at some point, these incremental improvements just aren't going to excite the typical smartphone buyer.

Augmented reality applications have the potential to change that. To be clear, there are applications that can push the limits of device performance, such as the highest-end mobile video games. However, such applications are relatively niche.

The opportunity for Apple with respect to augmented reality is that an entirely new class of applications could be born that'd be both computationally demanding and potentially appealing to the mass market. That could, at least for a time, help to quicken the pace at which typical iPhone and iPad owners upgrade to new devices.

Another worry surrounding Apple's business is that lower-cost smartphones are quickly catching up with Apple's higher-end devices in terms of features and capabilities. If computationally intensive augmented reality applications take off, then not only would there be compelling applications that'd push owners of older iPhones to upgrade, but smartphone customers in general may come to value hardware performance more than they currently do.

In that case, Apple could make a stronger case to consumers that its high-end iPhones deliver better value than mid-range smartphones from the competition because those mid-range phones simply can't deliver the kinds of augmented reality experiences that Apple's latest iPhones can.

Predicting whether augmented reality will truly take off or simply be a fad is hard. Trying to figure out what kind of long-term financial benefit Apple may enjoy if augmented reality takes off is even harder. However, in general, Apple benefits when applications that can take advantage of its latest devices become ubiquitous.

Augmented reality could be huge for Apple, and I think we'll know for sure if it is as the next three to five years play out.