Please ensure Javascript is enabled for purposes of website accessibility
Log In Help Join The Motley Fool
Free Article Join Over 1 Million Premium Members And Get More In-Depth Stock Guidance and Research
By John Rosevear - May 5, 2021 at 1:37PM

You know it's getting bad when Ford idles the Ranger's production line.

Ford Motor Company (F 0.75%) said on Wednesday that it will suspend production at several of its factories, including the Detroit-area plant that builds the profitable Ranger pickup and (soon) the Bronco SUV, as it works through a worsening global shortage of automotive-grade semiconductors.

In a memo to employees, Ford said that its Michigan Assembly Plant, which builds the Ranger and is preparing to begin production of the much-anticipated Bronco, will be shut down for the first time during the weeks of May 17 and May 24. Other Ford plants, including a Kansas City factory that builds F-150 pickups and Transit commercial vans, will also be shut down during that same period, Ford said. 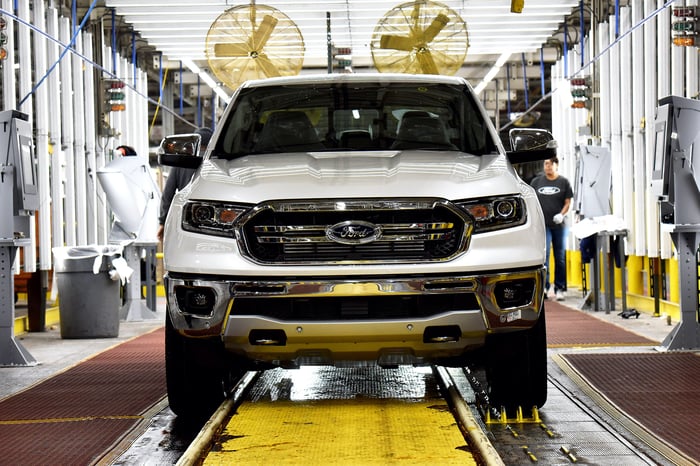 The Michigan factory that makes Ford's popular Ranger pickup -- and that will soon begin manufacturing the Bronco SUV -- will be idled for at least two weeks amid a global shortage of computer chips, the company said today. Image source: Ford Motor Company.

The lost production will be expensive for Ford. Using first-quarter production figures, I estimate that the loss of two weeks' production of the Ranger, the Kansas City-built F-150, and the Transit will cost Ford a bit over $1.2 billion in revenue. Given the likelihood that the chip short will linger for at least several more months, Ford may not be able to make up that lost production before the end of the year.

Details of the memo to Ford employees were first reported by Automotive News.

Ford is one of a long list of global automakers that has been forced to cut back production amid the global chip shortage, a consequence of high demand for computers and other digital devices amid the COVID-19 pandemic last year.

Ford warned last week that it expects the chip shortage to hit its worst point in the current quarter, with some improvements in supply likely in the second half of 2021. The company currently expects the shortage to cost it about 1.1 million vehicles, or about 20% of its planned production, over the course of the full year.