Please ensure Javascript is enabled for purposes of website accessibility
Log In Help Join The Motley Fool
Free Article Join Over 1 Million Premium Members And Get More In-Depth Stock Guidance and Research
By Jason Hawthorne - Updated May 10, 2021 at 4:25PM

It signals a big push toward curing a neurological disease with a massive market.

In President Joe Biden's first proposed budget to Congress, he requested authorization for spending increases in a number of areas. One of the most prominent was healthcare. Specifically, the president proposed a new agency within the National Institutes of Health (NIH) with a directive to cure some of the most pressing diseases of our time, including Alzheimer's disease.

The hope is that targeting resources toward a disease that already affects nearly 6 million Americans would accelerate a cure, much like the government backing of Moderna's vaccine for COVID-19. If the budget is adopted, biotechs like Denali Therapeutics (DNLI -1.82%), Cassava Sciences (SAVA 5.64%), and Eli Lilly (LLY 2.60%) could find themselves with more resources than ever in a market that is estimated to reach $13 billion by 2028. 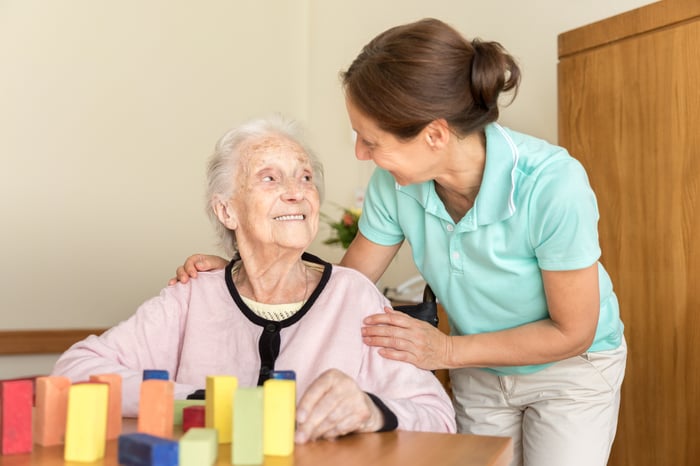 Denali targets Alzheimer's as well as other neurodegenerative diseases like Parkinson's and Lou Gehrig's disease, known asamyotrophic lateral sclerosis or ALS. The company employs a unique approach to crossing the blood-brain barrier (BBB), a particularly stubborn obstacle when trying to deliver treatments to the brain. It serves as both a physical barrier and a selective filter that prevents many molecules, ions, and cells from moving between the blood and the brain.

Denali has developed what it calls Transport Vehicle (TV) technology to cross this barrier. In November, the concept was proven when its treatment for a rare condition known as Hunter's syndrome exceeded its goals in only four weeks of treatment. Although it was just a phase 1/2 study, it was the first demonstration that the TV approach could work.

Denali has been partnering with Sanofi. In 2020, the pair ditched their initial attempt to fight Alzheimer's in favor of DNL788. That drug is better able to inhibit a protein that crosses the BBB and is associated with inflammation and cell death in the brain. Beyond the work with Sanofi, Denali has worked with the University of Washington at St. Louis to target a gene associated with late onset Alzheimer's without increasing the risk of brain bleeds -- a side effect previously associated with the approach.

If the Biden budget proceeds, the company could find itself with additional support for its various efforts. That could take the form of expanded clinical trials, accelerated data reviews, or even new partners.

Cassava's primary goal is to defeat Alzheimer's, and the company already enjoys the support of the NIH. Its drug simufilam is currently in a one-year safety study with scientific and financial support from the agency. Many drugs for Alzheimer's attempt to remove amyloid from the brain. That's the protein that forms the plaques commonly associated with the disease. Instead, simulfilam attempts to restore the normal shape and function of a critical protein that holds molecules together in the appropriate arrangement.

In the past few years, Cassava has put up a series of encouraging results in clinical trials. This year, the company reported on the first 50 patients who had completed six months of treatment. Cognition and dementia-related behavior improved by 10% and 29%, respectively.

Management believes the drug is ready for phase 3 and plans to initiate the study in the second half of 2021. As of April, 100 of the anticipated 150 participants had already been enrolled. Updates will be provided in July and September for the first cohort of patients.

A related opportunity could become the biggest revenue source. Cassava is developing a simple blood test for Alzheimer's. The test could one day identify patients before the appearance of memory loss. This work is also supported by NIH. The relationship with NIH puts Cassava in prime position be a trailblazer in Alzheimer's if the new administration can secure the requested funding.

Eli Lilly recently published results showing its drug donanemab successfully slowed cognitive and functional decline of patients with early Alzheimer's disease. It accomplished this by curtailing the spread of a molecule that malfunctions in the brains of patients with the disease and reducing amyloid. The drug's benefit was observed as early as nine months after beginning treatment and slowed decline by 32% compared to placebo. Lilly will move forward cautiously as the most recent findings were based on a small cohort of 257 patients.

Management has already indicated it would not push for accelerated approval after getting feedback from the Food and Drug Administration (FDA). Instead, it will begin a full-scale clinical trial later in 2021. That will take about a year to enroll and results will be assessed after three years. With additional support, it's possible the trial could be expanded or the FDA timeline accelerated. Unlike Denali and Cassava, Lilly has the resources and experience to manage full-scale clinical trials of its drug without external support.

Congress is ultimately in charge of federal spending, so Biden's budget request represents more of a prioritization than anything else. However, after several COVID-19 vaccines were developed in less than a year -- something many consider a small miracle -- scientific advances aimed at curing diseases could be more popular now than ever. That may give the proposed initiative a better chance at coming to reality.

Alzheimer's has been a baffling disease for decades, and drugs targeting it have a 99% failure rate. Two reasons are the financial risk of pursuing anything other than the most promising treatments and the lack of participants in drug trials. Additional support and a national program to focus on cures could change that. If so, Denali, Cassava, and Lilly shareholders should reap the rewards.