Please ensure Javascript is enabled for purposes of website accessibility
Log In Help Join The Motley Fool
Free Article Join Over 1 Million Premium Members And Get More In-Depth Stock Guidance and Research
By James Brumley - May 17, 2021 at 9:04AM

Both retailers thrived in the throes of the pandemic, but as the dust settles, one is moving into the post-pandemic environment on a much firmer footing.

By almost any measure, both Amazon (AMZN -1.38%) and Target (TGT -1.12%) are healthy companies. Amazon of course dominates North America's e-commerce market, while scrappy Target continues to prove it can keep bigger rival Walmart (WMT 0.19%) on its toes. Both stocks are solid performers as well.

But if there's only room for one of these two names in your portfolio right now, it's got to be Amazon. Target is moving into the next era of retailing without the same financial footing as its rivals, and that's going to matter.

Don't misread the message. This isn't necessarily a call to sell any Target shares you may own, particularly if doing so creates an ill-timed tax bill. The fact is, however, that Amazon is able to make investments in its own growth that Target simply can't. 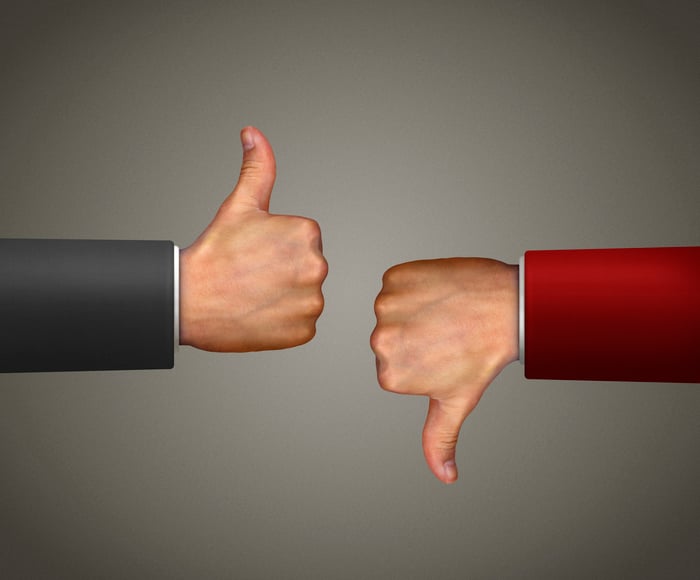 One area we're clearly seeing this is on the logistics front.

In 2020, Amazon increased its warehouse and fulfillment square footage on the order of 50% by building dozens of new facilities. More are on the way, too. The company's planning 1,000 more localized/neighborhood distribution hubs in the coming years and is even experimenting with sidewalk-traversing autonomous package delivery vehicles. In the meantime, Amazon added another dozen cargo jets to its delivery fleet last year, bringing its leased count to 82, and in January of this year upped the ante by outright buying another 11 aircraft.

The end goal isn't difficult to figure out. With a deeper, more capable delivery network, Amazon is positioning itself to be the go-to seller of whatever consumers want. Moreover, more delivery self-sufficiency means third-party logistics providers are less and less necessary.

This is in contrast to Target's self-determination efforts, even to the limited extent it can do more of its own delivery work. It owns the personal shopping and doorstep-delivery outfit Shipt, but to make Shipt viable, it also offers an at-home delivery service for competing retailers like Costco and Meijer. Target has brilliantly begun using its stores to fill online orders, but that's more of a had-to move than a strategic initiative. It would be more efficient to handle those orders from a dedicated fulfillment center.

Moreover, Amazon is the developer of game-changing in-store shopping technologies, unveiling Amazon One in September of last year. Amazon One essentially reads your palm print as an alternative to a credit card, facilitating true contactless payments. The tech is being deployed in some Amazon-owned stores now, but it is available as a service to other retailers ready to upgrade their shoppers' in-store experience.

Amazon also now boasts more than 200 million paying Prime members, operates a competitive pharmacy business, has inked a deal with the NFL to exclusively broadcast Thursday night games, and has made several award-winning movies and television programs for its Amazon Prime streaming service.

Target's got no answer for any of those.

To date, it's not mattered much. Amazon saw revenue improve by 38% last year, yet most investors realize that growth is the result of an unprecedented pandemic that prompted a surge in online shopping. Target's same-store sales growth of 19% last year was just as impressive, as the company remains mostly geared toward in-store shopping that was stymied due to the pandemic. Target's e-commerce growth technically outpaced Amazon's, even if the bar was set low.

Consulting firm AlixPartners reports that 43% of U.S. consumers say the COVID-19 pandemic has permanently changed their buying behavior. Consumers eventually gravitate to where they can find the lowest cost, quickest service, and most perks. Amazon typically tops Target on all three fronts.

To this end, analysts believe Amazon is positioned to capture more than its fair share of this e-commerce growth as well as growth in the overseas e-commerce market. The latest consensus estimate suggests Amazon's top line will expand by 27% in 2021. The same analyst community also expects Target's top line to slide just a little bit lower, matched with a similar dip in earnings.

Target isn't going down without a fight, for the record. The company says it's going to spend around $4 billion per year for the next few years to upgrade its supply chain and logistics capabilities. But for a company that typically reports operating income of less than $4 billion per year -- with no assurance any of that investment will actually drive organic growth -- Target's asking a lot from its investors.

Again, don't read more into the message about these two companies than is being said. Target's big spending plans are probably the right move to make in the long run. And it's not as if Amazon can do no wrong.

It's increasingly clear, however, that Amazon's sheer size and deep pockets are allowing the behemoth to fund growth that its smaller rival just can't afford. Look for this situation to start manifesting this year in ways that were obscured by the coronavirus pandemic in 2020.