Please ensure Javascript is enabled for purposes of website accessibility
Log In Help Join The Motley Fool
Free Article Join Over 1 Million Premium Members And Get More In-Depth Stock Guidance and Research
By Taylor Carmichael - May 25, 2021 at 6:00AM

First time investor? Here are three stock ideas that can form a solid investing foundation for the rest of your life.

It can be scary investing in the stock market for the first time. There's a lot of financial information for newbies to discover and a lingo you have to learn. Typically, none of this is taught in schools, so you have to pick up the information out on the street (so to speak) or on free websites like this one. I learned over 90% of what I know about the stock market from The Motley Fool, so this is a great place to start.

The good news is that the math is with you. The power of compounding returns should make your investments go up in value over time. You will have some losers -- it happens to everybody. But the key aspect is to let your winners run. According to Motley Fool CAPS, only 57% of my bullish calls actually outperform the stock market. But what happens is that a few of those winners really, really outperform. If you let those winners run, you don't have to worry about your bad investments or the stocks that lose money -- your winners should more than make up for it over time.

Here are three stocks that I think will outperform the market over the next decade:  Amazon (AMZN -0.99%), IMAX (IMAX -0.12%), and Roku (ROKU 1.63%). I believe these are great stocks for beginners. Read more to find out the risks and rewards of these three equities. 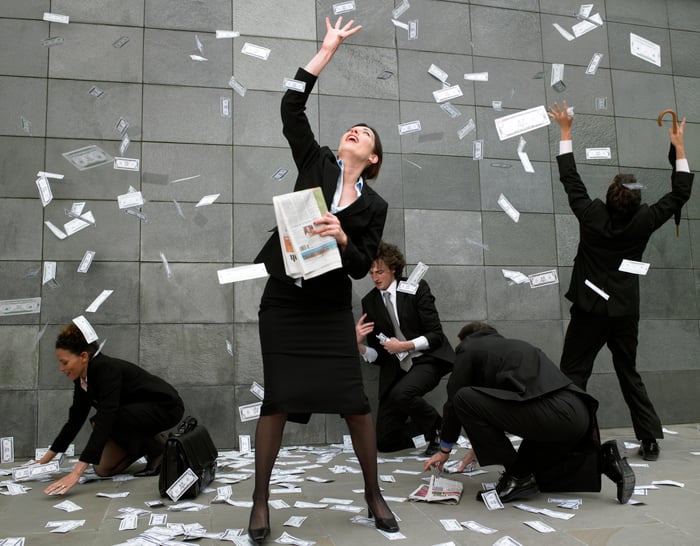 Amazon will make money for you

Amazon is already a huge company, with a $1.6 trillion market cap. A market cap is the total value of a public company. It's found by multiplying the number of shares outstanding with the price per share. As I write this, one share of Amazon costs $3,290, and there are 504 million shares outstanding.

Will owning Amazon shares make you rich? Not necessarily. The company is already huge, one of the most valuable companies in the world. While it will continue to grow and advance, it's a mature company, and it might be difficult for the stock to go up another 10,000%. So chances are, a $1,000 investment in Amazon won't make you a millionaire. (At some brokerages you can buy fractional shares, so you can buy one third of a share). Nonetheless, despite its massive size, Amazon is a great investment vehicle for beginners.

That's because Amazon is a retailer, a company that sells just about anything on its website. The market opportunity for retailers is vast — bigger than any other market sector. We all buy things, and retailers are where we go to buy them. Amazon was the top dog and first mover in internet retail. The company's strong brand and imposing mindshare act as a powerful moat keeping competitors at bay. Amazon is a relatively safe investment vehicle, and its stock should continue to outperform the stock market for a decade or more.

IMAX has significant upside from these levels

Obvious investments like Amazon can still outperform the market. But if you want to make serious money from your stocks, small caps are the place to shop. Getting a 10,000% return from a stock is how fortunes are made. IMAX is a $1.2 billion company. Will it get as big as Amazon? Probably not. That's one of the first things I like to do as I contemplate a stock investment — estimate how big the market opportunity is.

IMAX provides technology to movie theaters that want to show films on giant screens. The worldwide box office for films in 2019 was $42 billion. That's a sizable market opportunity for IMAX, but it's peanuts compared to the trillions that Amazon is chasing. Nonetheless, I expect IMAX to be a fantastic stock over the next decade, as the company's screens capture more and more of that $42 billion market opportunity.

While movie theaters are expensive to build, and companies can accumulate a lot of debt doing so, IMAX has managed to avoid all that. IMAX licenses its big-screen technology to other companies that build out the theaters. IMAX has $267 million in cash and $289 million in debt. Compare it to a company like AMC Entertainment (AMC 8.03%) with its $11 billion in debt, and IMAX is in the sweet spot.

Movie attendance has been killed during this COVID-19 lockdown. I think it's going to come surging back when our society reopens, and I expect IMAX stock to surge right along with it.

Streaming vs. the Movie Theater

People have been predicting the death of movie theaters for decades. Back in the 1950s, people thought that free television would keep people from buying movie tickets. And then in the 1980s, people thought VHS and DVD technologies would doom the movie experience. And now people are saying that streaming will finish off the theater chains once and for all.

No way. That's why my family owns shares of IMAX; you can make a lot of money if you are right when the market is wrong. Hollywood is actually spending more and more money on bigger and bigger productions, massive films with huge special effects. To recuperate those costs, the studios need big screen excitement, which IMAX delivers in spades.

Could my IMAX investment fail? Sure. That's why it pays to diversify and hedge your bets. And you can certainly make a lot of money riding a popular wave. Roku is at the epicenter of a massive transformation as more and more families stream their movie entertainment at home.

Advertising is a huge $228 billion worldwide market opportunity, with internet ads leading the way followed by $141 billion in TV advertising. Roku is riding the shift of ad buys to streaming TV. While this is a tiny market compared to Amazon, it's nonetheless a huge opportunity, and Roku is winning the fight. That's why Roku stock is so expensive, at 20 times sales and 300 times earnings. You have to pay up for winners.

Which stock is the best investment now?

IMAX is the cheapest of these three stocks, with the smallest market cap. I think the potential upside is sizable with IMAX. And Amazon is a no-brainer stock to put under your pillow. But of these three names, Roku is my highest conviction for outperformance. Beginners might want to start there.