Please ensure Javascript is enabled for purposes of website accessibility
Log In Help Join The Motley Fool
Free Article Join Over 1 Million Premium Members And Get More In-Depth Stock Guidance and Research
By Bram Berkowitz - May 26, 2021 at 8:58AM

The acquisition is larger than what Glacier has made in the past and the bank paid a high premium for the seller.

The nearly $20 billion asset Glacier Bancorp (GBCI -1.93%) based in Montana recently announced its intention to acquire the $3.5 billion asset Altabancorp (NASDAQ: ALTA), the largest community bank in Utah. The deal is a bit of a divergence from acquisitions Glacier has made in the past, which tend to be smaller. Glacier is also paying a hefty premium to buy Altabancorp. Let's take a look at what drove Glacier to pull the trigger and what it means for the combined company going forward.

Glacier plans to pay close to $934 million in an all-stock deal to acquire Altabancorp, valuing each common share at $49.03. That values Altabancorp at almost 290% of tangible book value (equity minus goodwill and intangible assets). Even with today's high bank valuations, that is a huge premium, but is not entirely surprising considering that Altabancorp is a high-performing bank in a fast-growing market.

Still, even with the high premium, Glacier, being a high performer on its own and currently trading at nearly 325% tangible book value, is able to make the deal work from a financial perspective. Once the deal closes, the acquisition will immediately grow Glacier's tangible book value, which is solid considering the high premium it is playing for Altabancorp and the fact that acquisitions often dilute equity. The deal is also accretive to earnings per share (EPS) by 5.2% in 2022, meaning that the earnings of the combined bank will be higher by 5.2% than Glacier's projected earnings in 2022 on its own.

This figure could also be low considering EPS estimates are based on Glacier eliminating 17.5% of Altabancorp's expenses. That's pretty low for a straightforward acquisition like this. While there is minimal branch overlap among the two banks, both use the same core processing system from Jack Henry and therefore very similar software to power services such as teller transactions, mortgages, and other digital banking services. Not only does this make the integration a lot easier, but it could lower technology spend as well. On a conference call following the announced acquisition, CEO Randall Chester called the cost savings projection of 17.5% "conservative."

Altabancorp comes with a loan portfolio heavy in commercial real estate and construction loans that will increase the overall yield on Glacier's total loan book, while maintaining Glacier's excellent and low-cost deposit franchise. The loan portfolio also improves Glacier's credit quality by slightly lowering the ratio of non-performing assets (those in danger of going into default) to total assets at the combined bank. 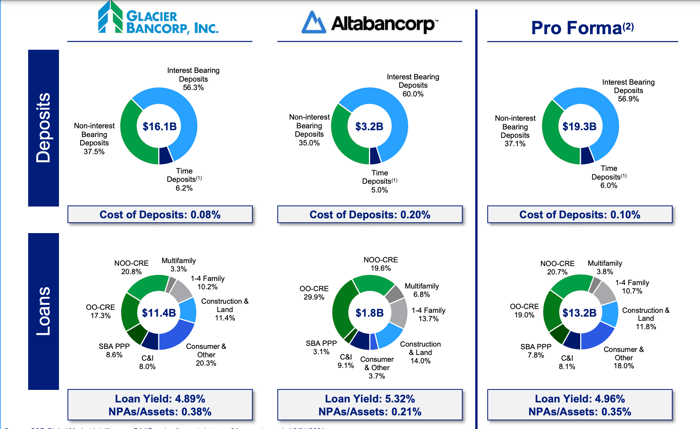 An important thing to remember is that banks are not bought, they are sold, meaning the seller is usually approaching the buyer or letting potential buyers know that it wants to sell. And while high bank valuations lead to higher sale prices, they can also lead to more banks that have not historically considered a sale to finally raise their hand. Getting close to three times tangible book value, Altabancorp saw a great environment to sell in and it appears that Glacier had been anxiously waiting. Chester said he's had his eye on Altabancorp for nearly a decade, so I'm sure when the opportunity presented itself, the actual sale price probably didn't matter, especially with Glacier trading at such a high valuation.

The primary reason Glacier wants Altabancorp is to further its presence in Utah, the fastest-growing market in Glacier's eight-state geographic footprint, and also the second fastest-growing state in the U.S between 2010 and 2021. Utah is a bank's dream, with the most rapid U.S. housing unit growth rate for the last three years. Roughly 14% of Altabancorp's loan portfolio is composed of construction and land development loans, many of which are likely being made to real estate developers building homes. That's a high concentration for a community bank because these loans are considered to be risker, but Altabancorp has maintained solid credit quality and the construction and land development portfolio has an attractive average yield of 6.25%.

Utah also has the 5th lowest unemployment rate in the country and a business-friendly environment, not to mention the fact that the state just invested more than $4 billion in the Salt Lake City International Airport, making it the first new U.S. hub airport built in the 21st century. Altabancorp management said on its first-quarter earnings call that it expects to grow loans in the high-single-digit percentage range in 2021, which is great considering most banks are uncertain about loan growth this year. Analysts on the call also thought that was a very conservative estimate by the bank.

The other great thing about Altabancorp is how much it offers Glacier in terms of technology. Being on the same core processing system is not a must in acquisitions, but it certainly helps. These core processing systems power a bank's daily loan and deposit transactions, among many other functions, so any time a bank is switching or trying to update its core systems, it can be a huge disruption.

Not only is Altabancorp using Jack Henry-powered core processing software, but Chester said much of the software Altabancorp is using is a generation ahead of Glacier's (banks have been operating with really old core processing technology) and already integrated onto the same core platform, which makes the integration much easier. For instance, Chester said that Altabancorp's commercial loan origination system is newer and that Altabancorp also uses a state-of-the-art construction loan platform. Ultimately, Chester said he thinks Altabancorp's tech will accelerate Glacier's technology road map and potentially lower the overall cost as well.

Is Altabancorp worth the price?

Even though Glacier is paying a high premium for Altabancorp, it's really not that bad of a price because it doesn't dilute Glacier's tangible book value and is accretive to EPS as well. Glacier is also taking out a big competitor in a footprint that it wants to grow in. Additionally, as I mentioned above, it does not seem like Glacier really cared about the price tag considering how long it has wanted Altabancorp and how beneficial the addition is from a growth and technology standpoint. The deal really looks like it can take the high-performing Glacier Bancorp to new levels quicker than it could have reached on its own.

Can This Regional Bank in the Rockies Keep Winning in 2021?