Please ensure Javascript is enabled for purposes of website accessibility
Log In Help Join The Motley Fool
Free Article Join Over 1 Million Premium Members And Get More In-Depth Stock Guidance and Research
By Leo Sun - May 26, 2021 at 7:15AM

The e-signature pioneer still has plenty of room to run.

DocuSign (DOCU -5.49%), the world's largest e-signature services provider, went public at $29 per share in April 2018. It dazzled investors with its early-mover's advantage and robust revenue growth, and the stock subsequently skyrocketed to nearly $200.

However, investors might be wondering if DocuSign still has room to run as investors rotate from growth to value stocks in this jittery market. Let's dig deeper to find out.

How does DocuSign make money?

DocuSign controls about 70% of the e-signature market. It serves roughly 892,000 paying customers worldwide, including 18 of the world's top 20 pharmaceutical companies, seven of its top ten tech companies, and ten of the top 15 financial companies. Hundreds of millions of people use its services. 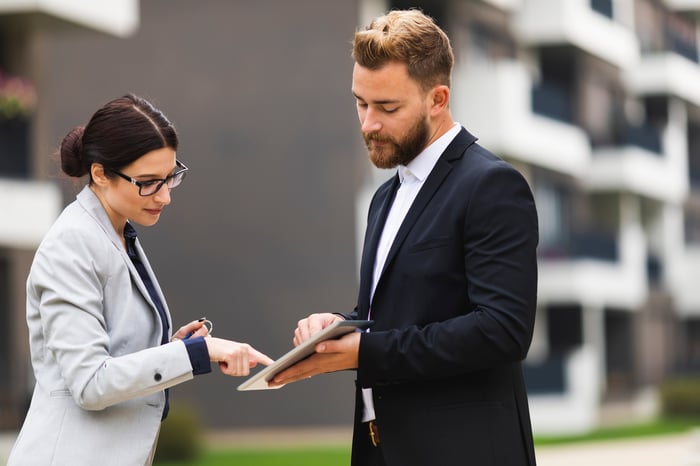 DocuSign's most notable competitors include Adobe (ADBE -3.18%), which offers e-signature services in its Document Cloud, and Dropbox (DBX -2.58%), which acquired the e-signature start-up HelloSign in 2019 and integrated its services into its cloud storage platform.

To widen its moat against those more diversified rivals, DocuSign bundled together its web, email, and mobile app signature services into the DocuSign Agreement Cloud in 2019. It also added its contract lifecycle management services from SpringCM, which it bought the previous year, to that ecosystem.

How fast is DocuSign growing?

DocuSign's year-over-year growth in revenue and billings accelerated in fiscal 2021, which ended in January, and its gross margin remained stable.

DocuSign attributed some of that acceleration to the pandemic, which forced businesses to rely more on digital and remote signatures. But during last quarter's conference call, CEO Dan Springer said the company doesn't believe its "new or expanded customers will be going back to paper even after the pandemic recedes."

DocuSign's number of paying customers jumped 51% in 2021, and it ended the year with a net retention rate of 123%. That metric, which measures its year-over-year revenue growth per existing customer, grew from 117% in 2020, and has remained comfortably above 100% since the company's IPO.

Those growth rates indicate DocuSign's ecosystem is sticky and it isn't losing many customers to Adobe, Dropbox, or other competitors. Furthermore, DocuSign's Agreement Cloud can be integrated into other cloud-based enterprise software platforms -- including Salesforce, Microsoft's Office 365, and Alphabet's Google Drive -- which should shore up its defenses against its diversified competitors.

But is DocuSign's growth sustainable?

DocuSign's stock-based compensation consumed 20% of its revenue last year, and that ratio will likely remain high. As a result, the company will keep relying on new convertible debt and secondary offerings to shore up its free cash flow, while its number of outstanding shares -- which has steadily risen since its IPO -- will continue to climb. 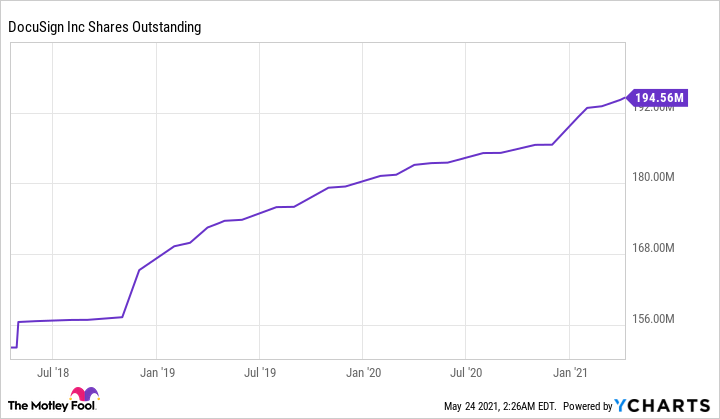 DocuSign's stock isn't cheap at over 100 times forward earnings and nearly 20 times this year's sales, and its rising share count indicates it will remain expensive for the foreseeable future. Therefore, investors expecting DocuSign to outperform the market this year could be disappointed, especially if investors continue to shun pricier tech stocks.

Will its growth justify those valuations?

During DocuSign's latest conference call, CFO Cynthia Gaylor declared that "coming into this fiscal year, we expect to see continued secular tailwinds in support of the anywhere economy."

Gaylor expects DocuSign's revenue to rise 35%-36% for the full year, and for its non-GAAP gross margin to expand to 79%-81%. Analysts expect its full-year revenue and non-GAAP earnings to grow 36% and 46%, respectively.

Those estimates indicate DocuSign's growth will decelerate slightly after the pandemic passes, but it should continue expanding as more companies go paperless and streamline their contract management services. Based on these facts, I believe DocuSign remains a solid investment for long-term investors -- even if it struggles to outperform the value-oriented market over the next few months.