It might also be the first domino to fall as big tech takes over healthcare.

For all of the advances in artificial intelligence (AI) and machine learning (ML) in advertising, it's a market with its fastest growth in the rearview mirror. That's why the largest technology companies have their eyes on the $3 trillion healthcare industry. Privacy concerns and the industry's cautious attitude toward new approaches have made it a slow process, but that may be about to change.

Hospital Corporation of America (HCA -1.82%), or HCA, is teaming up with Alphabet's Google (GOOG -1.79%) (GOOGL -1.77%). It will use data from its 2,000 locations and 32 million annual patient visits to develop algorithms to benefit patients, staff, and the overall organization. It opens up a world of possibilities for the internet giant and may slam the door on the proliferation of healthcare start-ups. 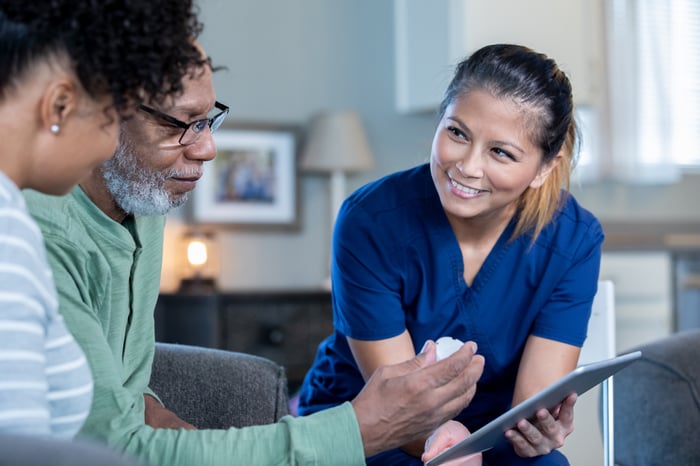 The announcement includes the example of helping operations, like automating inventory controls for critical supplies. That would be an important application, but it doesn't scratch the surface of how the data could be used to improve operations. Like every solution that employs a systems approach, it could benefit all stakeholders.

Having data to track patients through the health system between doctors, hospitals, labs, and outpatient centers would enable good prediction models to be built. Patterns of demand might even allow predictions down to the time of day. Knowing that would let schedulers plan surgeries and staffers allocate scarce resources where and when it makes the most sense.

Rather than the high-cost, low-return activity of recruiting more nurses from a dwindling candidate pool, HCA could implement flex shifts where nurses moved throughout the system during different parts of the day to prevent bottlenecks. The need to triage emergency department patients, discharge patients from their rooms, and get radiology orders complete is not the same at all times of the day, nor is demand. Using AI could essentially create a resource where there was none, by better utilizing the staff that does exist.

During the COVID-19 crisis, HCA used its own technology to monitor patients and suggest better treatment options. The company saw improved survival rates after rolling out the process, but comprehensive data from millions of patient records could bring this to another level and save both lives and the precious time of staff.

As many as half of patients who die in the hospital have sepsis. Of course, many of them have other serious underlying conditions. Still, recent research suggests as many as one in eight -- and at least one in 25 -- of those deaths could have been prevented.

Sepsis is caused by the body's reaction to an infection. Chemicals are released in the bloodstream and can often overwhelm normal function and cause organ damage and death. Because sepsis is caused by infection, timely administration of antibiotics is critical in preventing it. Unfortunately, many of the early signs are similar to less serious issues.

Even the most dedicated hospitals rely on overwhelmed staff to identify sepsis risk and track progression of the signs. Furthermore, it's often a manual process. More robust data, from vital signs to medical devices, could help create a predictive model that is both reliable and automated. Using the most conservative estimate from the research would mean saving the lives of almost 30,000 of the 700,000 people who die in a hospital each year.

Wannabe start-ups will be left out in the cold

Archaic IT systems and the reliance on manual, often instinct-driven decision making have been ripe targets for technology start-ups serving the healthcare industry. Last year capped a multi-year trend with a record $15.3 billion raised in more than 600 deals, according to SVB Financial. Many of the start-ups are little more than a few algorithms and an impressive sales pitch. In an industry drowning in data with little knowledge about how to use it, that's been enough.

Often, each function within a healthcare system may be working with its own vendors to solve individual problems, all by pulling from the same data. This dynamic resembles minnows feasting on a beached whale, and ends up adding complexity to workflows and cost to the organization.

Google's deal with HCA is a sign that the free for all is coming to an end. Consolidation of hospital systems had already begun to shrink the number of potential customers for these start-ups. When the largest healthcare system in the country partners with the leading purveyor of artificial intelligence, others will take the hint. It's time to professionalize data science if they want to keep up.

Still not the only game in town

Despite the scale, the partnership won't take over healthcare anytime soon. Google had previously reached a similar deal with other prominent hospital systems only to suffer a public relations backlash over the use of data.

For its part, Microsoft has partnered with Providence, another hospital system, in an effort to develop a cancer algorithm. In yet another sign that the writing is on the wall, 14 hospital systems recently formed a joint company to share and analyze anonymized health records. Others have invested in Health Catalyst, a healthcare analytics firm that went public in 2019.

Like musical chairs, it appears that large healthcare systems are choosing their seats. The combination of Google and HCA is imposing and will likely prompt others to follow suit. As they find partners, expect the pace of announcements between large technology companies and the healthcare industry to accelerate. It will likely be good for patients, good for health systems, and prompt a reevaluation of the hundreds of small tech companies in the industry.