Please ensure Javascript is enabled for purposes of website accessibility
Log In Help Join The Motley Fool
Free Article Join Over 1 Million Premium Members And Get More In-Depth Stock Guidance and Research
By Dan Caplinger - May 28, 2021 at 11:41AM

The cloud-computing space has been red-hot over the past year, with many industry players assisting in the digital transformation that the corporate world has gone through. Even as parts of the world begin to reopen their economies to greater in-person interaction, the prospects for cloud companies remain strong.

In particular, two cloud stocks reported earnings that wowed investors. Below, we'll look at what salesforce.com (CRM 1.69%) and Veeva Systems (VEEV 0.32%) had to say about their recent business activity.

Salesforce is a force to be reckoned with

Shares of salesforce.com climbed almost 6% on Friday morning. The customer relationship management software pioneer had a lot of good things to say about its most recent financial performance. 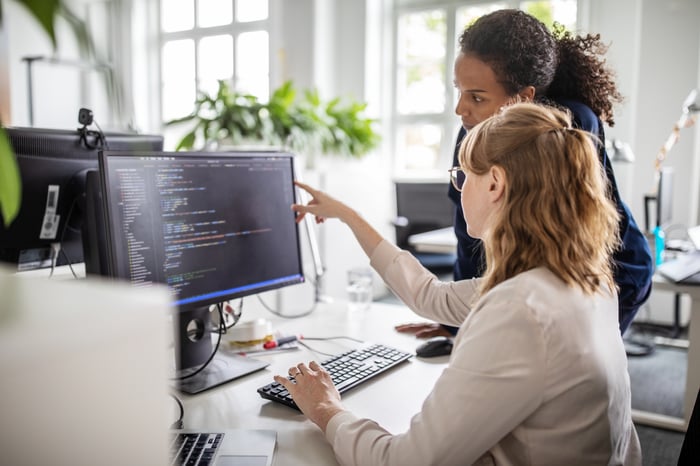 Salesforce's first-quarter report looked solid. Sales climbed 23% year over year to nearly $6 billion. That helped send the company's bottom line skyward, with adjusted earnings per share climbing by 73% from year-ago figures. Revenue gains were spread out across the company's segments, with platform, marketing, and service CRM products all climbing at annual rates of 20% or more.

Even more encouraging, Salesforce reported big boosts to its total remaining performance obligations under current contracts. That number amounts to $35 billion, which works out to almost 1 1/2 year's worth of revenue at current run rates. Salesforce has also strengthened its balance sheet, as cash and marketable securities balances have soared over the past couple of years.

Accordingly, Salesforce boosted its guidance for the full year, now expecting 22% growth in revenue from last-year's levels. That bodes well for investors, which explains why the share price is on its way up.

Elsewhere, Veeva Holdings climbed even further, with its stock gaining 11%. First-quarter results from the life sciences cloud software specialist showed how successful its business model has been.

Veeva's numbers were reasonably good. Revenue climbed 29% from year-ago levels, with a roughly even mix between its commercial cloud and vault segments. Total subscription revenue grew at a slightly slower 26% pace. But what was notably impressive was Veeva's 40% rise in adjusted net income for the period.

Veeva celebrated some key business milestones. The company's 59 new customers for the period was a new record and pushed Veeva's overall client count above the 1,000 mark. In particular, Veeva landed a top-20 pharmaceutical company for its Vault quality-management system software platform, and the cloud provider is optimistic that it can keep up its recent momentum.

Looking ahead, Veeva now expects full-year revenue of around $1.82 billion, which would represent roughly 24% growth from the previous fiscal year. That's not huge for a cloud company, but it's an upgraded outlook from what Veeva had previously anticipated. That could potentially bode well for the company's ability to cash in on the cloud opportunity in the pharmaceutical and biotech areas going forward.