Please ensure Javascript is enabled for purposes of website accessibility
Log In Help Join The Motley Fool
Free Article Join Over 1 Million Premium Members And Get More In-Depth Stock Guidance and Research
By Jeremy Bowman - May 29, 2021 at 9:02AM

The identity-for-the-cloud company expects to hit $4 billion in revenue in just a few years.

Okta (OKTA 1.09%), a provider of cloud software for identity management, has been a steady winner on the market since its 2017 IPO.

The cloud stock has returned 850% since then, and the company has grown by both attracting new customers and expanding relationships with existing ones. At the same time, its addressable market has grown from $18 billion to $80 billion, and earlier this month, it closed on a $6.5 billion acquisition of Auth0, a customer identity management specialist, which will accelerate Okta's growth and add to its firepower internationally. 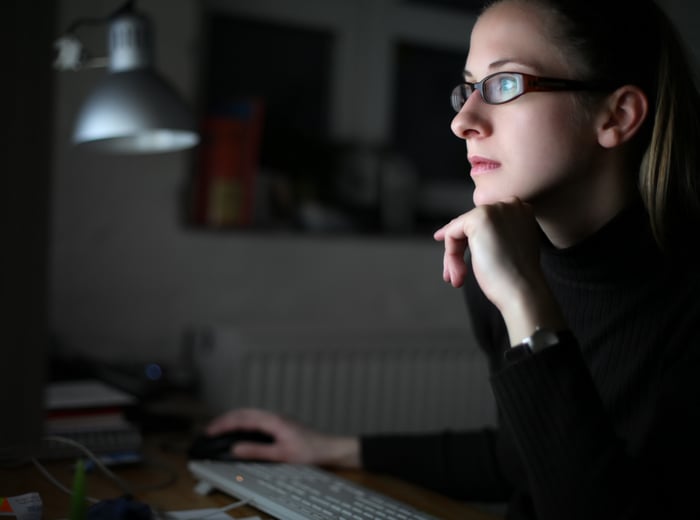 Okta's steady performance was on display once again in its fiscal first-quarter earnings report. Revenue rose 37% to $251 million, outpacing analysts' estimates at $238 million. On the bottom line, its adjusted loss per share widened from $0.06 to $0.10, a reflection of increased spending to integrate Auth0, but that was also better than the analyst consensus calling for a loss of $0.20 per share.

Among other key metrics, dollar-based net retention rate was 120%, meaning revenue from its existing customer base grew 20%. Remaining performance obligations (RPO), essentially its backlog, rose 52% to $1.89 billion, while current RPO, which is subscription revenue contracted over the next 12 months, rose 45% to $899 million, outpacing revenue growth in the quarter. Free cash flow hit a record at $53 million, or 21% of revenue. The company finished the quarter with 10,650 customers, up 27% from the prior year.

After closing on the Auth0 acquisition at the beginning of the month, Okta management is working to integrate the two companies and ensure there's a strong cultural fit. The acquisition will both accelerate Okta's revenue growth for the year and weigh on its bottom line. For the full year, the company sees revenue growth of 46% to $1.22 billion (at the midpoint of the range) and an adjusted loss per share of $1.16 to $1.13.

However, the biggest news in the report came from the company's new long-term forecast.

The path to $4 billion

For the first time, management provided a long-term revenue target, calling for $4 billion in revenue by fiscal 2026, or four years from the current fiscal year. That represents a compound annual growth rate of at least 35% over the next four years. The new forecast is being driven by faster penetration of the customer identity access management market with the help of the Auth0 acquisition; continued growth from large enterprise customers, including a new Fortune 10 customer; expanding partnerships as identity establishes itself as a primary cloud service; and accelerating international expansion, again with an assist from Auth0.

The market for cybersecurity is also snowballing on multiple fronts. In an interview, COO Frederic Kerrest noted that the recent executive order on cybersecurity from President Biden requires federal agencies to adopt multi-factor authentication protection, one of Okta's core products. The executive order should help accelerate the company's growth within the federal government, which has already been ramping up.

In addition to the revenue growth target, the company also hopes to reach a 20% free-cash-flow margin by fiscal 2026.

Kerrest pointed out the company is chasing an $80 billion opportunity and has only reached a $1 billion revenue run rate, indicating there is plenty of opportunity for growth ahead. Meanwhile, the tailwinds supporting Okta's ambitions continue to strengthen, including the Biden cybersecurity order and the broader digital transformation in the corporate world as companies embrace the tools that allow for seamless and secure logins that Okta provides.

Okta stock remains expensive by traditional metrics, trading at price-to-sales ratio of about 28 based on this year's revenue forecast. But the company's medium-term target should reassure investors that it has several years of strong growth ahead of it. While some other growth stocks have crashed in the market rotation into value stocks, Okta has remained solid, and the latest guidance shows why. In a volatile, high-growth industry, Okta could be one of the most reliable performers.