Please ensure Javascript is enabled for purposes of website accessibility
Log In Help Join The Motley Fool
Free Article Join Over 1 Million Premium Members And Get More In-Depth Stock Guidance and Research
By Jeremy Bowman - Mar 5, 2021 at 11:22AM

The cloud-based identity specialist is spending big bucks to take over a rival. Here's why.

Shares of Okta (OKTA 1.43%) were sliding after the company reported fiscal 2021 fourth-quarter earnings on Wednesday. The cloud-based provider of identity-based verification tools that allow customers and employees to seamlessly and securely log in delivered another solid quarter, beating estimates, but the market sentiment seems to be turning against high-priced tech stocks.

As for the key numbers in the earnings report, revenue increased 40% to $234.7 million, topping the consensus estimate of $221.9 million, and it delivered a per-share profit of $0.06, up from a loss of penny per share in the year-ago quarter, which beat estimates at the same mark.

However, the big news from Okta in the quarter was that it would acquire Auth0, a cloud-native provider of identity authorization. 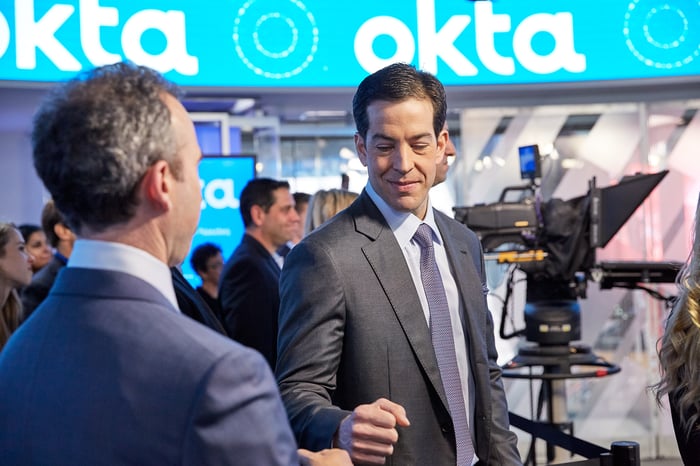 Auth0 was valued at just $1.9 billion in its last funding round in July, making the price tag somewhat splashy, which may have contributed to the after-market sell-off. However, valuations have changed since then and, as an all-stock deal, Okta is taking advantage of its own lofty share price. Auth0, which many see as the company's chief cloud-based competitor, will give Okta's business a significant boost and solidify its leadership in cloud-based identity in a number of ways.

Auth0 was founded in 2013 and has about 800 employees. The company focuses on customer identity management, which Okta has identified as a $25 billion market and makes up about half of Okta's business, with employee identity management making up the other half.

COO Frederic Kerrest explained in an interview that customer identity management is the kind of thing that companies would like to be able to deploy directly into their app as they would with Twilio in communications or Stripe in payments, but it's hard to build the right solutions, and it can be costly if it's not done correctly, leaving an opening for a data breach.

Kerrest also touted the company and its product, saying, "They're really experts at this developer-led motion in customer identity management. They're the best in the world at everything from developer relations and libraries, sample code, and documentation, and they're really well-loved." He also called the deal a "marriage made in heaven," for customers of both Auth0 and Okta as it will simplify customer identity management for them.

Auth0 will operate as an independent company inside Okta and will be accretive in a number of ways once the deal closes, as Auth0 expects more than $200 million annual recurring revenue over the next year. Auth0 also has a strong footprint in international markets, which should help Okta continue to grow outside the U.S.

What's next for Okta

Looking ahead to the current year, the company expects revenue growth of 29% to 30% for $1.08 billion to $1.09 billion for fiscal year 2022, slightly ahead of the analyst consensus of $1.07 billion. On the bottom line, the company sees an adjusted loss per share between $0.44 and $0.49, which was worse than the $0.27 loss per share it had last year and well below analyst estimates of a profit per share of $0.01. Despite that gap, profitability has been trending in the right direction as its fourth-quarter adjusted profit shows; its free cash flow for the year tripled to $110.7 million, or 13.3% of revenue. That suggests that concerns about fiscal 2022 guidance seem overblown.

In the near term, Okta stock could be vulnerable to further pullback if interest yields rise and tech stocks continue to slide. Investors should remember that the stock is up more than 800% from its 2017 IPO, and its price-to-sales multiple has expanded significantly since then, so its valuation is still extended based on historical levels.

Still, the overall business looks as solid as ever after another strong quarter and a bold acquisition that will lock up market share and accelerate growth. Despite the sell-off, there's no reason for long-term investors to bail on the stock here.