Please ensure Javascript is enabled for purposes of website accessibility
Log In Help Join The Motley Fool
Free Article Join Over 1 Million Premium Members And Get More In-Depth Stock Guidance and Research
By Rich Duprey - Jun 1, 2021 at 8:06AM

Though still down from 2019, it marks another step forward for the city's casino industry.

China's Golden Week holiday welcomed a large influx of tourists to the gambling mecca of Macao who promptly gambled large sums of money in the city's casinos.

Monthly gross gambling revenue surged 492% in May from last year, hitting 10.4 billion patacas, the local Macao currency, or around $1.3 billion. It's the highest amount this year and marks the first time since January 2020 that revenue was in the tens of billions of patacas. 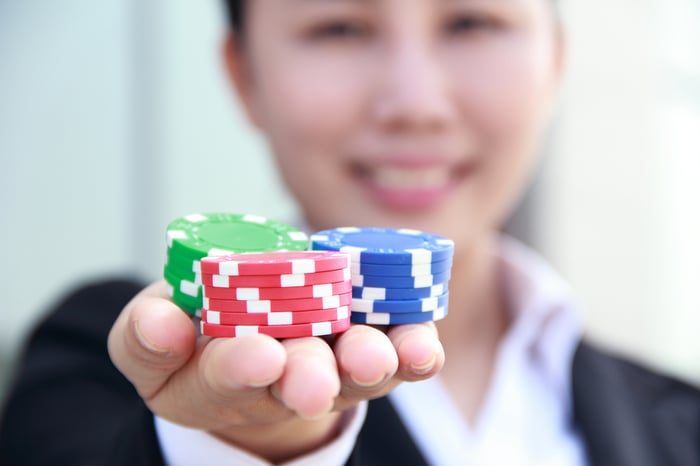 Casinos in China were counting on the Golden Week holiday -- one of three week-long festivals held in the country at various times -- to lift the prospects for gambling's revival.

The holiday ran from May 1 to May 5 and the Macao tourism office said some 167,000 visitors came to the city, a 158% increase compared to the Spring Golden Week holiday held in mid-February, and 25% more than visited in all of April. The third Golden Week holiday will occur at the beginning of October.

Wynn Resorts (WYNN -2.81%) reported last month it generated $3 million of adjusted EBITDA per day during Golden Week, which CEO Matt Maddox deemed "by far the highest amount of normalized profit that we've been able to generate since the onset of the pandemic at the beginning of 2020."

Wynn is one of the casinos currently most dependent upon Macao for revenue and profits, but Las Vegas Sands (LVS -0.24%) recently sold all of its Las Vegas properties to go all-in on gambling in Asia. It reported earnings in April ahead of the holiday, and though it didn't want to speculate on results at the time it said it was encouraged.

Macao's May gaming revenue, however, remains some 60% below the levels achieved in 2019.