Please ensure Javascript is enabled for purposes of website accessibility
Log In Help Join The Motley Fool
Free Article Join Over 1 Million Premium Members And Get More In-Depth Stock Guidance and Research
By Rich Duprey – Jun 1, 2020 at 7:44AM

Gambling revenue has fallen 80% or more for four straight months due to the COVID-19 pandemic.

Casinos operating in Macao saw revenue plunge another 93% in May as China maintained travel restrictions to the region due to the coronavirus pandemic. However, it was better than the 95% drop analysts had been expecting after seeing a 97% decline in April.

The Gaming Inspection & Coordination Bureau reported casinos generated just 1.7 billion Macanese patacas, or $221 million, in May. So far in 2020, gambling revenue of 33 billion patacas is down 74% from last year, though last year's total was down slightly from 2018. 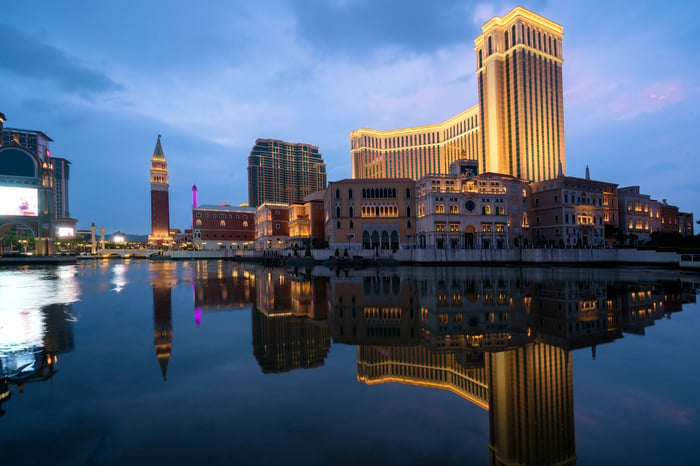 Wynn Resorts (WYNN -0.36%) has been the most affected by the decline in tourism in Macao, which has been virtually shut down since February. The integrated resort operator generates approximately three-quarters of its adjusted earnings before interest, taxes, depreciation, and amortization from Macau.

Las Vegas Sands (LVS 0.15%) is also heavily exposed to the city, generating over 60% of its adjusted EBITDA from there. MGM Resorts (MGM -0.03%) still realizes most of its profits from the U.S., though Las Vegas closures have essentially caused it the same sort of problems. Most resort operators are planning to reopen at least some of the Vegas Strip casinos starting this week, but gamblers likely won't return in any appreciable numbers for some time there either.