Please ensure Javascript is enabled for purposes of website accessibility
Log In Help Join The Motley Fool
Free Article Join Over 1 Million Premium Members And Get More In-Depth Stock Guidance and Research
By Harsh Chauhan - Jun 2, 2021 at 9:45AM

These two tech companies can still deliver performance thanks to their contributions to the 5G revolution.

The deployment of 5G wireless networks and the rollout of 5G-enabled devices across the globe has provided a solid tailwind for many companies. Keysight Technologies (KEYS 1.73%) and Qorvo (QRVO 2.16%) are two that have won big from this market. Their share prices have doubled in the past three years, handily outpacing the broader stock market's gains.

The good news is that there's still a lot more growth to come in the 5G market, so it won't be surprising to see these two stocks put up similarly impressive performances in the future. 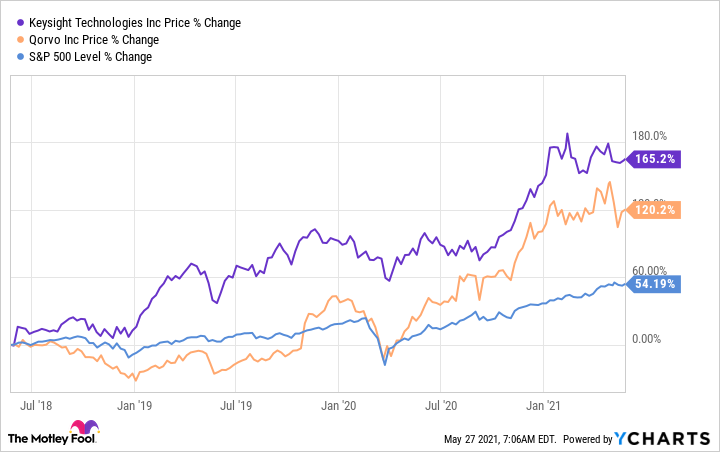 Keysight Technologies is a manufacturer that provides network testing equipment to telecom companies. It has seen a steady increase in revenue and earnings over the years. 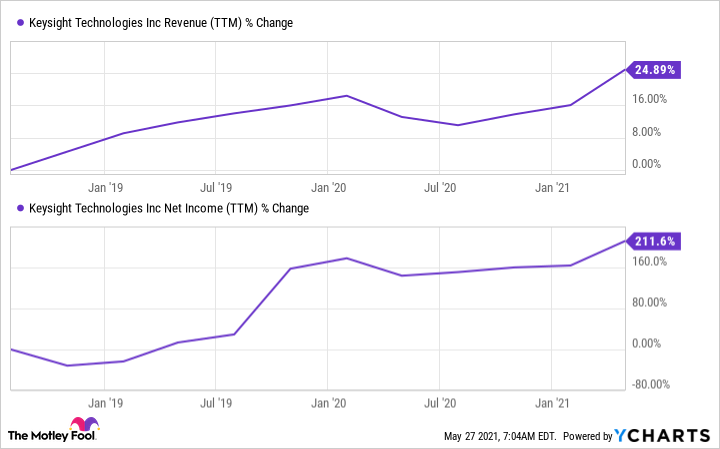 Even better, it's stepping on the gas, as evidenced by its recently released quarterly report. For the period ended April 30, Keysight's revenue shot up by 36% year over year to an all-time quarterly high of $1.22 billion, while adjusted net income jumped to $1.44 per share from $0.78 per share in the prior-year period.

The company's communications solutions group, which accounts for 72% of total revenue, registered 34% year-over-year growth thanks to an increase in demand for hardware for 5G deployments. CEO Ron Nersesian highlighted this on the latest earnings conference call:

We ... have secured multiple 5G solutions wins in the aerospace, defense, and government markets. Commercial communications orders and revenue both grew double digits, driven by the ongoing investments in 5G and 400 gig, 800 gig Ethernet solutions for data centers.

Nersesian added that Keysight has broadened its 5G customer footprint by adding new accounts, including major players such as Fujitsu, NEC, and MediaTek. More importantly, the company is going after emerging opportunities such as open radio access networks (O-RAN) in the 5G market. Keysight believes that its broad range of offerings covering network protocol testing, security, and visibility could help it tap into this fast-growing market that's expected to play a critical role in the deployment of 5G.

According to a third-party estimate, the global 5G test equipment market is expected to grow at a high-single-digit percentage rate annually over the long run. Meanwhile, the O-RAN market could witness $10 billion worth of investments by 2025, according to the Dell'Oro Group.

Keysight's guidance for the current quarter indicates that its impressive momentum isn't dissipating. Management anticipates 20% year-over-year revenue growth to $1.21 billion, along with non-GAAP earnings of $1.42 per share as compared to the year-ago period's $1.19, a 19% increase.

The stock trades today at 35 times earnings, a discount compared to its five-year average P/E of nearly 47. Its forward earnings multiple of 21 anticipates solid earnings growth and analysts expect Keysight to deliver robust double-digit percentage earnings growth annually over the long run. All of this makes Keysight a top 5G stock to buy right now.

Qorvo looks like one of the best bets on the 5G market as the chipmaker is taking advantage of network deployments and benefiting from rising sales of devices that will run on 5G networks.

The mobile market is Qorvo's biggest source of revenue, accounting for 75% of its total last quarter and registering 45% year-over-year growth. The smartphone market is benefiting in a big way as they are the most accessible devices helping consumers experience the blazingly fast speeds that 5G networks offer. Qorvo supplies its chips to many of the leading players in the 5G smartphone market, including Apple, its largest customer, accounting for 30% of total revenue in fiscal 2020.

The good news is that Apple will continue to be a solid catalyst for Qorvo, as 5G-equipped iPhones are on track to generate massive sales volumes, thanks to a huge number of iPhone users who have been waiting to upgrade. Apple is expected to set new sales records in 2021, and that momentum is forecast to continue next year as well.

Moreover, 5G smartphones are creating additional revenue opportunities for Qorvo to the tune of $5 to $7 per unit. CFO Mark Murphy explained on the latest conference call that the combination of higher revenue per 5G smartphone and improved volumes would push the company's mobile business into a higher gear:

In mobile, demand for 5G is adding RF complexity and driving higher content. We forecast mobile revenue in the current quarter to be approximately $810 million at the midpoint, or up 73% year over year.

Additionally, Qorvo's margin profile has received a terrific shot in the arm. 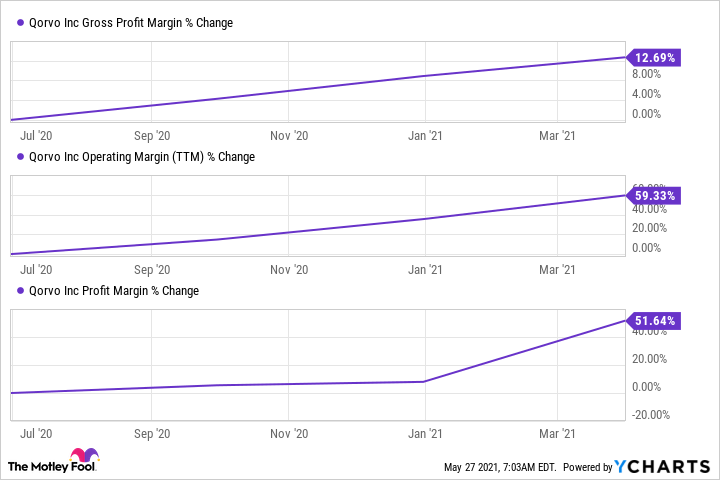 Given that annual 5G smartphone shipments are expected to increase from 2020's estimate of 213 million units to over 1 billion units by 2025, Qorvo's top and bottom lines could keep growing at elevated rates. Analysts expect the company's earnings to grow annually by percentages in the mid-teens over the next five years as compared to its annualized earnings growth of just 6.3% over the last five years.

Finally, Qorvo's price-to-earnings ratio of 28 is on the lower side considering the high-flying growth it is delivering, while its forward P/E ratio of 14 anticipates significantly improved earnings power. As such, it isn't too late for investors looking to buy Qorvo stock, as it is a high-growth company that's slated to keep winning big from the 5G rollout for a long time to come.