Please ensure Javascript is enabled for purposes of website accessibility
Log In Help Join The Motley Fool
Free Article Join Over 1 Million Premium Members And Get More In-Depth Stock Guidance and Research
By Harsh Chauhan - Apr 28, 2021 at 9:00AM

A turnaround in the company's fortunes after a difficult 2020 could send this 5G stock higher.

The deployment of 5G (fifth-generation) wireless networks worldwide has been a longtime catalyst for electronics equipment manufacturer Keysight Technologies (KEYS -1.23%). The company's revenue, earnings, and stock price have increased at a nice clip over the past few years as 5G infrastructure rolled out globally, creating demand for its network test equipment solutions.

However, the novel coronavirus outbreak hamstrung Keysight's growth last year. The company had to stop manufacturing activities and was unable to fulfill orders as lockdowns and shelter-in-place orders affected operations. But those headwinds are becoming a thing of the past, and Keysight's growth is back on track.

The company reported fiscal 2021 first-quarter results in February. Keysight started the new fiscal year on a positive note with revenue increasing 8% year over year to $1.18 billion. Core revenue, which excludes the effect of currency changes and revenue from businesses bought or sold over the past year, was up 6%.

More importantly, Keysight's orders increased 7% year over year to a record $1.22 billion during the quarter despite trade restrictions with China. The company says its revenue and orders recorded solid double-digit growth after adjusting for the effects of the trade restrictions. Management's guidance, however, shows the company can deliver double-digit growth this quarter despite that headwind.

The company expects second-quarter revenue of $1.20 billion and adjusted earnings between $1.29 and $1.35 per share. That would be a substantial jump over the year-ago quarter, when Keysight delivered non-GAAP earnings of $0.78 per share on core revenue of $892 million.

So what's helping Keysight switch into a higher gear?

Keysight is witnessing solid momentum across both of its business segments -- communications solutions and electronic industrial solutions.

The communications solutions group produced 72% of Keysight's revenue last quarter. The segment's core revenue was up 3% year over year to $852 million, while operating margin increased 170 basis points. The company credits the robust growth of this segment to global 5G deployments, the launch of new 5G devices, and investments in high-speed ethernet for data centers.

Keysight is confident it can sustain this growth as more customers are opting for its 5G platform to deploy new applications such as open radio access networks, popularly known as O-RAN. This is a nascent technology that generated just $70 million in sales in 2019, according to technology research firm Omdia. The firm expects the O-RAN market to hit $3.2 billion in revenue by 2024, powering 9.4% of 4G and 5G networks.

Omdia has significantly upgraded its forecast, as it was earlier anticipating O-RAN revenue of $2.1 billion in 2024. That's because the early success of the technology is encouraging its adoption by more telecom providers. Keysight also pointed out something similar on its latest earnings call with CEO Ron Nersesian stating, "O-RAN continues to be an area of active investment for our customers."

The company has already struck partnerships with several O-RAN providers, and its 5G platform added over 100 new customers in the fiscal first quarter. The commercial communications business (which falls under the communications solutions group) generated record orders during the period.

Frost & Sullivan estimates the demand for 5G testing equipment should clock a double-digit annual growth rate through 2024, so the communications business can continue gaining steam in the coming years as the market expands.

The electronic industrial solutions business that accounted for 28% of revenue last quarter also outpeformed as revenue increased 18% year over year to a record $328 million. Semiconductor companies invested in new technologies, and the company scored customer wins in China. Orders in this segment also recorded double-digit growth during the quarter.

Semiconductor foundries are preparing to invest a lot of money to boost their infrastructure over the coming years. As a result, equipment suppliers such as Keysight stand to gain from this market's secular growth going forward. Given these tailwinds, it's not surprising to see why analysts expect nearly 15% overall revenue growth from Keysight this fiscal year, along with a nice jump on the bottom line that's expected to continue for several years. 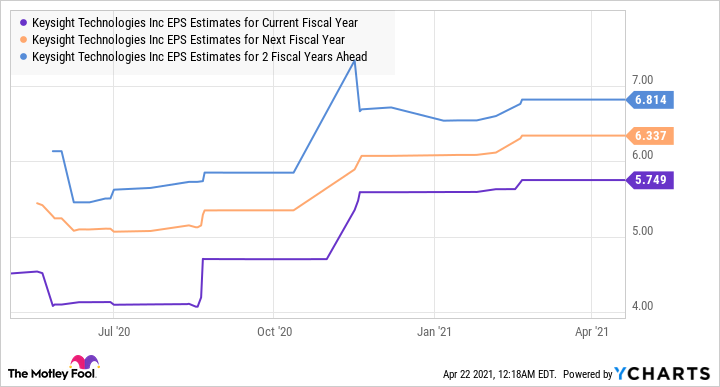 With shares trading at 26 times forward earnings estimates as of this writing, investors looking to add a 5G stock to their portfolios should take a closer look at Keysight Technologies.