Please ensure Javascript is enabled for purposes of website accessibility
Log In Help Join The Motley Fool
Free Article Join Over 1 Million Premium Members And Get More In-Depth Stock Guidance and Research
By Daniel Foelber - Jun 2, 2021 at 10:49AM

This energy stock is positioned to combat inflation and benefit from a growing economy.

If economic indicators were characters in Greek mythology, then inflation would probably be Hades.

Interest rates and unemployment -- call them Zeus and Poseidon -- tend to garner most of the spotlight. Inflation is that distant third metric that's easy to forget about but equally important.

For the past 40 years, inflation has never really been an issue. At least, not nearly as much as in the 1970s, when it averaged around 7%.

With the economy reopening, businesses are looking to make up for lost time by raising prices. Workers are ready to take advantage of an uptick in the business cycle through wage hikes. And consumers are, in turn, ponying up more for goods & services. The result is inflation, which simply means a dollar buys less today than it could a year ago. In a perfect world, inflation would affect all businesses and consumers equally, but it doesn't. In fact, certain sectors -- like energy -- are much better suited to handle inflation than others. Here's why oil and gas giant ConocoPhillips (COP 1.26%) is a dividend stock worth considering if you're worried about inflation. 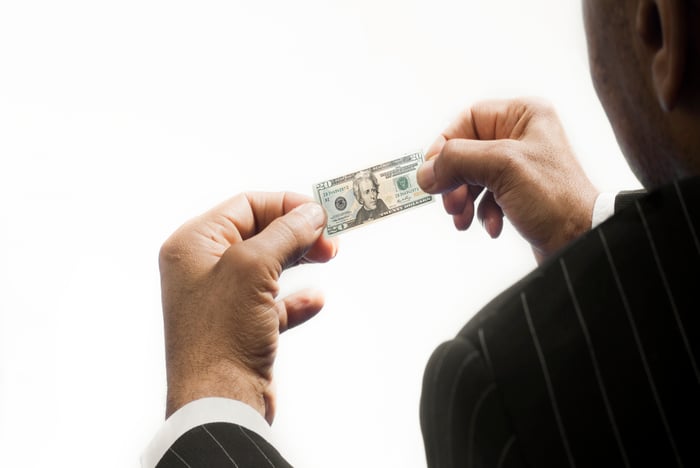 The integrated oil and gas value chain is made up of three main sections: upstream (exploration and production), midstream (transport and storage), and downstream (refining and marketing). Integrated majors like Chevron and ExxonMobil do all three. Some companies focus on just one part. ConocoPhillips is primarily an upstream company and it's the largest independent U.S.-based producer. Its business is highly correlated to commodity prices, leaving it vulnerable to market cycles. 2020 was a perfect example of this volatility. ConocoPhillips lost $2.7 billion as demand for oil and gas plummeted.

Ready for an uptrend

ConocoPhillips has been hard at work reducing its cost of supply so that it can turn a profit even at lower oil and gas prices. Slashing spending and improving efficiency have helped the company mitigate losses and keep a lid on the amount of debt it adds to its balance sheet. In 2020, ConocoPhillips was just trying to survive, and it did a good job of navigating a difficult climate. 2021 has been much more kind. West Texas Intermediate (WTI) crude, the U.S. benchmark, is averaging over $60 per barrel since February.

Its acquisition of Concho Resources for what looks to be a good price has further lowered its cost of supply. ConocoPhillips is entering a period of higher oil prices with a fairly efficient asset portfolio, which should help it generate a lot of excess free cash flow (FCF) to pay dividends and reduce some of the debt it took on last year. The company is guiding for $5.5 billion in 2021 capital expenditures, around 17% less than it spent in 2019. However, production is expected to be 1.5 million barrels of oil equivalent per day (MBOE/D), which is more than the 2019 average of 1.31 MBOE/D. This is all to say that ConocoPhillips is positioned to produce more oil and gas for a cheaper cost, which is sure to be a winning strategy in periods of high or low oil and gas prices.

The context of lower spending

While investors are likely to welcome efficiency improvements, extended periods of lower spending are likely to impact future earnings. This is because oil and gas companies need to spend money to develop their reserves as existing ones get depleted. Too little spending could mean lower production in the future, and in turn, less revenue.

There's no doubt that ConocoPhillips is intent on running a tight ship and developing oil and gas for a cheaper price than its competitors. Management has been adamant about this objective for years. That being said, it may be a stretch to say the company's lower spending plan is set in stone. ConocoPhillips is still recovering from a brutal year, not to mention it stuck its neck out to buy Concho Resources. Given the context, it seems prudent for management to take a somewhat cautious approach so the company can regain its footing.

A low cost of supply should help ConocoPhillips deliver a lot of value to shareholders through dividends and share buybacks. The company currently sports a 3.1% dividend yield, well above the 1.3% average in the S&P 500.

Digging into the details of the company's first-quarter earnings call, ConocoPhillips doesn't seem too interested in raising its dividend, but rather is looking to buy back up to $1.5 billion in shares in 2021. If oil and gas prices stay around the $60 level, the company should have no problem using free cash flow to pay down debt, support its dividend, and buy back shares.

In addition to the strength of its underlying business, ConocoPhillips is set up nicely for a period of higher inflation. Oil and gas prices tend to hold up when prices rise because consumers are less inclined to cut spending on essential goods and services.

ConocoPhillips showcases how volatility can be a double-edged sword for energy stocks. Just as upstream producers were some of the hardest hit by lower oil and gas prices, they also stand to benefit more than integrated majors when prices are high.

With a portfolio that is arguably at its most efficient in years, ConocoPhillips is a top-tier oil stock for investors with a high risk tolerance looking to combat inflation, collect a dividend, and benefit from higher oil and gas prices.