Since the oil and gas crash of 2014 and 2015, the industry has been mostly out of favor on Wall Street. Between 2017 and 2020 the energy sector produced a negative 39% total return compared to the market's over 80% gain -- taking the meaning of underperformance to a whole new level.

But in 2021, energy has so far been the top-performing sector as Saudi Arabian oil cuts have pushed West Texas Intermediate (WTI) crude oil prices above $50 for the first time since February 2020. Let's take a deep dive into the sector to determine where oil is going, if it's worth investing in -- and if so -- what stocks are the best buys right now. 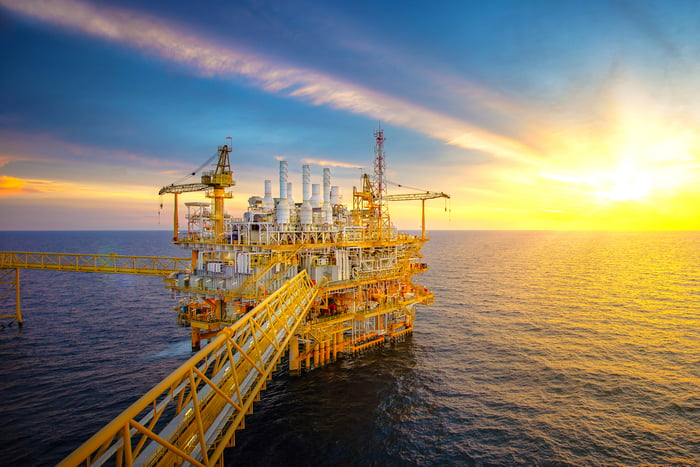 We can't have a discussion about oil stocks without talking about oil prices.

WTI crude oil prices finished 2019 right around $60 a barrel before briefly plunging into negative territory in late April 2020 as demand fell off a cliff due to the COVID-19 pandemic. Here's the average WTI crude oil price over the past five years.

In many ways, oil prices reflect the balance of supply and demand. Oil prices are rising because global supply is decreasing during a time when global consumption of ground and air transportation fuels could enjoy a steady climb throughout the year. But it wasn't too long ago that oil was in the $30s.

On Nov. 9, the stock market skyrocketed on possible vaccine news from drugmakers Pfizer and BioNTech, sending WTI crude oil prices above $40 per barrel. Even from that jump there remained four reasons why crude oil could continue to surge.

To summarize, increased demand for crude oil and refined products could outpace supply in the short term. Producers large and small cut production during the second and third quarter of 2020 in response to lower demand. Since supply can't come back overnight, higher demand could drive prices up over the short term. Over the long term, many publicly traded companies are trimming spending to focus on sustaining existing production, leaving little room to grow production. However, national oil companies (NOCs) maintain control over the majority of global supply -- leaving a level of uncertainty in the marketplace.

Still, years of lower spending paired with growing global demand could cause prices to rise. And finally, companies, especially the majors, are cutting oil and gas spending in favor of renewable investments. BP, for example, plans to produce 40% less oil in 2030 than it did in 2019. Permanent cuts could further reduce supply. 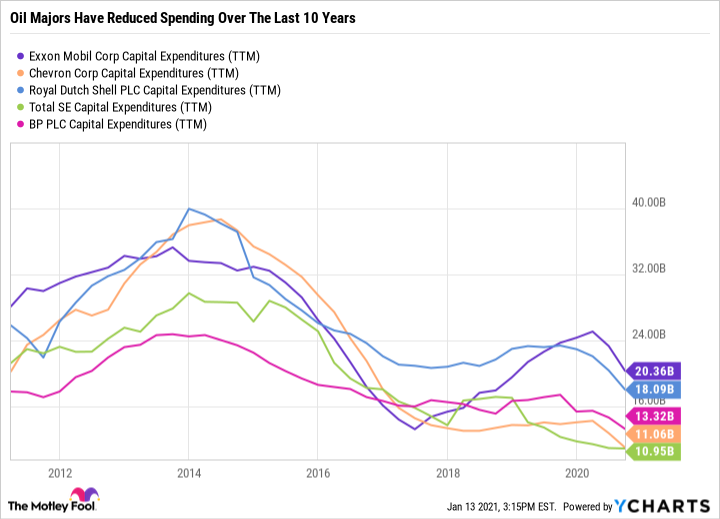 The benefits of higher short-term oil prices paired with what could be a long-term reduction in supply are partially offset by less oil demand. The International Energy Agency's latest world energy outlook suggests that oil demand could begin leveling off in 2030 at around 103.2 million barrels per day.

Oil price movements are outside of a company's control. However, businesses can position their portfolio of investments to breakeven at lower oil prices, which can help mitigate losses during downturns and capitalize on uptrends. There are several companies that are positioned well to cash in at $50 crude oil, largely because they have made timely acquisitions and shifted their portfolios toward only their most profitable assets. Many of the best upstream producers claim that they can now breakeven in the low $40s or the high $30s per barrel. It remains to be seen if a producer can consistently turn a profit even at that low price. But if it's true, then $50 per barrel would be the point where free cash flow (FCF) starts to take off, paving the way for dividend raises and more investment.

Efficient operations can make a great oil company, but not if it comes at the expense of high debt. Companies like Occidental Petroleum have achieved lower breakeven costs per barrel, but it has done so at the expense of its balance sheet. High debt obligations at high-interest rates is a recipe for disaster. It's best to steer clear of oil companies with high debt, even if they have efficient operations.

The energy sector is chock-full of risky players with suspect balance sheets. But there are a handful of energy stocks with high dividend yields, low debt, and efficient operations. Given the volatility of oil prices, the key is to prioritize financial health and low debt. For example, Chevron has arguably the best balance sheet of the oil majors which supports its stable and growing dividend (currently yielding over 5%). Texas Pacific Land Trust is another safer oil stock. It owns 900,000 acres in West Texas, has no debt, and $300 million in cash. It benefits from higher oil prices without having to spend a lot of money because companies tend to drill for more oil and build more pipelines through its land when prices rise.

Aside from upstream producers, the midstream industry is known for having stable and reliable sources of FCF and high dividend yields while being less exposed to commodity prices. Similarly, utilities with regulated revenue sources can also be a better energy investment than oil stocks for dividend investors.

The short answer is that it isn't too late for oil stocks, but the industry is full of companies with too much debt and too little upside. Even if oil consumption flattens in 2030, supply is unlikely to exceed demand because some oil companies are investing less in oil and more in renewables. Therefore, finding companies with low debt, high FCF that supports their dividends, and efficient operations is the best long term method for investing in oil stocks .