The Chinese government continues to crack down on the sector.

Shares of prominent Chinese education stocks have crashed today amid ongoing fears of a government crackdown on the sector. The market for private tutoring services has boomed in recent years, sparking concerns about the costs of raising children at a time when the Chinese government is attempting to encourage more people to have kids. As of 11:20 a.m. EDT, here's how these Chinese education companies were trading: 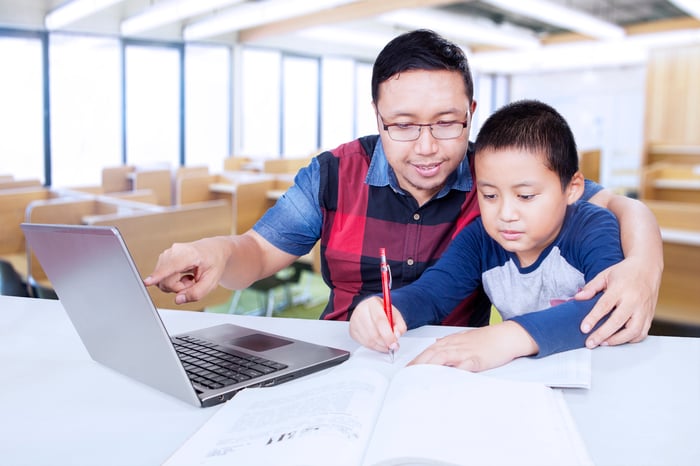 There doesn't appear to be any specific news from today that is causing the sectorwide meltdown. Rather, the weakness seems to be related to lingering concerns that the government is escalating its efforts to regulate private tutoring companies.

Earlier this week, the State Administration for Market Regulation (SAMR) reportedly imposed fines on 15 different private tutoring companies, alleging that the companies engaged in false advertising and deceptive sales practices in order to bolster revenue, according to Nikkei Asia. Schools operated by New Oriental Education and TAL Education were included in the group of organizations that were fined. The total penalty was approximately $5.7 million, according to the report.

The companies are accused of inflating teachers' credentials, as well as the results that students can achieve following the tutoring classes. A SAMR official also said some companies artificially increase prices simply to offer promotional discounts in order to make the offerings appear to have more value.

GSX Techedu announced a few days ago that it would be shuttering its preschool business in response to the increased regulatory scrutiny, which will require significant layoffs. The company is reportedly planning to let go a third of its workforce. The consumer discretionary stock tanked last week after GSX Techedu reported first-quarter earnings.

After-school tutoring is popular in China, with an estimated 75% of K-12 students attending some form of after-school class in 2016. The COVID-19 pandemic boosted demand for such services, as students shifted to remote learning. Reuters had previously reported that the Ministry of Education is drafting new regulations that could be rolled out as soon as late June.

Population growth in China is slowing, and the Chinese government is making policy changes to encourage Chinese couples to have more children. They fear a looming demographic crisis is on the horizon due to its aging population. The government this week announced that it will now allow couples to have up to three children, a significant shift following the 2016 change from a one-child policy to a two-child policy. Reducing educational costs that are imposed on families is one aspect of China's strategy to bolster birth rates.