Please ensure Javascript is enabled for purposes of website accessibility
Log In Help Join The Motley Fool
Free Article Join Over 1 Million Premium Members And Get More In-Depth Stock Guidance and Research
By Adam Levy – Jun 4, 2021 at 11:00AM

Prime Day earlier in the year can make a lot of sense for Amazon.

Amazon.com (AMZN -1.57%) will hold its annual Prime Day earlier than usual this year. Amazon held Prime Day in July from its inception in 2015 through 2019, but delayed it until October in 2020 amid the coronavirus pandemic. While COVID-19 forced Amazon to postpone the shopping holiday in some countries this year, it's taking place in the U.S. on June 21 and 22.

A second-quarter Prime Day may make more sense for Amazon going forward than moving it back to July next year. Here's why and what it means for investors. 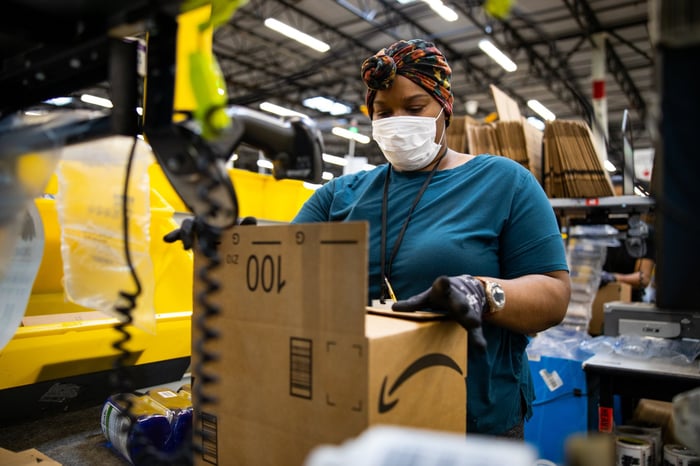 Planning to make the change pre-pandemic

During Amazon's first quarter earnings call, CFO Brian Olsavsky told analysts the company was already planning an earlier Prime Day in 2020. He cited a number of factors that may negatively impact sales for a July Prime Day, including the Olympic Games and more families taking vacation in July. "We believe that it might be a better timing later in Q2," he said.

Granted, the Olympics don't take place every summer, but that makes 2021 an optimal year to run a test for a second-quarter Prime Day. If it sees strong sales relative to its estimates for a typical July Prime Day like 2019, the change could become permanent.

Another reason investors believe Amazon moved its Prime Day into the second quarter is because it's facing a tough comparable quarter from last year. As COVID-19 spread throughout the world, Amazon saw a surge in orders, resulting in online store sales growth of 49% year over year in the second quarter.

But by doing so, Amazon's setting itself up for the need of another strong second quarter in 2022 in order to appease investors. That said, Amazon's been known to ignore short-term investor sentiment in favor of long-term growth. So, if a second-quarter Prime Day really doesn't work, it's not afraid of one "bad quarter" with slower revenue growth.

Open the door for multiple shopping holidays throughout the year

Last year's Prime Day was the unofficial kickoff to the holiday shopping season, which typically runs from late November through Christmas. It was an unquestionable success, setting new sales records for the company.

By moving Prime Day earlier in the year, it makes it more feasible for Amazon to run another shopping holiday near the start of the fourth quarter to extend the holiday shopping season like last year. A report from Recode says Amazon is considering a second shopping event.

A successful June Prime Day may indicate Amazon doesn't need to tie its premier shopping event to a historical shopping season like back-to-school or the holidays like it's done in previous years. Instead, it could move Prime Day even earlier in the year, creating more space between a second-quarter shopping holiday and a traditional holiday shopping kickoff event.

A successful move from the third quarter to the second quarter is a strong indication of brand strength for Amazon. It means Amazon can draw customers to shop on its marketplace without any other reason than it's running a big sales event at the end of spring. No need to plan around back-to-school or holiday shopping. That should strike fear into the competition, as few other retailers could convince consumers to buy stuff for the sake of buying stuff.

What's more, a second-quarter Prime Day could be a revenue boost, as the other big shopping periods aren't changing. While third-quarter sales won't be as strong as they would have been in years past, they should still get a small boost from back-to-school shopping, especially as shoppers have habituated over the last five years to turn to Amazon for those items. And Amazon has historically performed well during the fourth quarter, even without a special holiday shopping event like last year.

While Prime Day was originally conceived as a way to boost sales in the summer months, it may fit better in the spring going forward. That could mean an overall boost in annual sales while competing retailers struggle to keep up with Amazon's ability to draw in customers and keep them coming back.