Are opportunistic investors seeing promise in Fortuna Silver's upcoming acquisition and the CEO's bullishness about the price of silver?

Shares of Canada-based silver mining company Fortuna Silver Mines (FSM 3.33%) surged 15.3% in the month of May, according to data provided by S&P Global Market Intelligence.

Remarkably, the silver stock slumped nearly 22% in just the last week of April after announcing an acquisition, making its reversal in May even more pronounced. Not only did value investors see an opportunity after the stock's price drop, but stellar numbers from Fortuna Silver in May and management's comments about the impending acquisition and how the price of silver could soar by the end of this year added fuel to the fire.

Fortuna Silver earned $26.4 million in net income in the first quarter -- its highest-ever quarterly profit. Backing that growth was a 148% jump in sales as higher volumes across all of its mines complemented higher prices for both silver and gold. 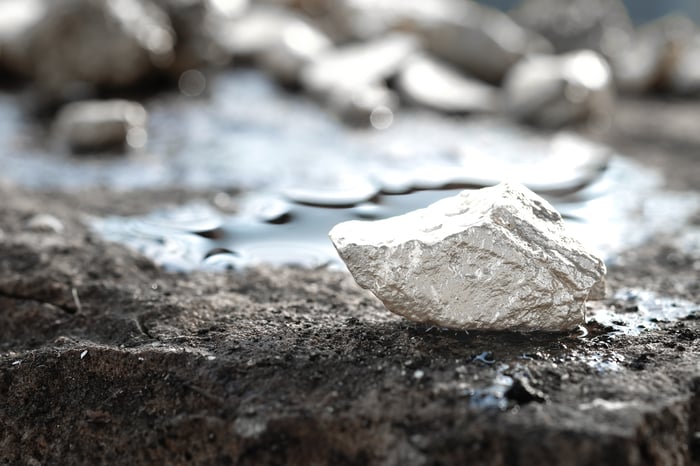 Notably, it was the first full quarter of production at Lindero, Fortuna's third mine that recently started commercial production. Lindero, a gold mine in Argentina, accounted for nearly 31% of Fortuna's total sales and 29% of its operating income in Q1. Fortuna owns and operates two other mines -- San Jose in Mexico and Caylloma in Peru.

The most interesting bit, however, came up during Fortuna Silver's Q1 earnings call when an analyst recalled how the stock crashed right after the company announced it would acquire Canada-based gold mining company Roxgold on April 26. In response, Fortuna's CEO Jorge Alberto Ganoza stressed how sometimes the stock market can be "short-term oriented." The deal, he said, could unlock a lot of value for shareholders.

Ganoza further revealed he believes the price of silver could cross $35 per ounce by the end of this year, implying significant upside from silver's current price of around $28 an ounce. Silver, in fact, has been on a torrid run in the past couple of months.

Fortuna's proposal to acquire Roxgold didn't go down well with the market given the high premium, but the move could be meaningful. It will diversify Fortuna's presence into West Africa with strong exploration potential at a time of uncertainty in Fortuna's existing regions such as Peru, which is in the midst of a chaotic presidential election.