A reopening economy and strong prospects are helping these two highfliers.

The stock market managed to build some upward momentum on Thursday, sending some market benchmarks into potential record territory. Interestingly, market participants didn't seem troubled by the latest inflation numbers, which pointed to the fastest rate of price increases in more than a decade. As of 12:30 p.m. EDT today, the Dow Jones Industrial Average (^DJI -0.27%) was up 109 points to 34,556. The S&P 500 (^GSPC 0.10%) had gained 18 points to 4,237, and the Nasdaq Composite (^IXIC 0.77%) had added 65 points to 13,977.

Pent-up demand has been lifting many companies that cater to consumers, and people with considerable disposable income have been particularly ready to get back to normal. That likely played a role in sending shares of high-end home furnishings retailer RH (RH 0.97%) higher on Thursday. And commercial- and business-jet producer Embraer (ERJ -0.62%) also had good news that could point to better times ahead for the Brazilian aircraft manufacturer. 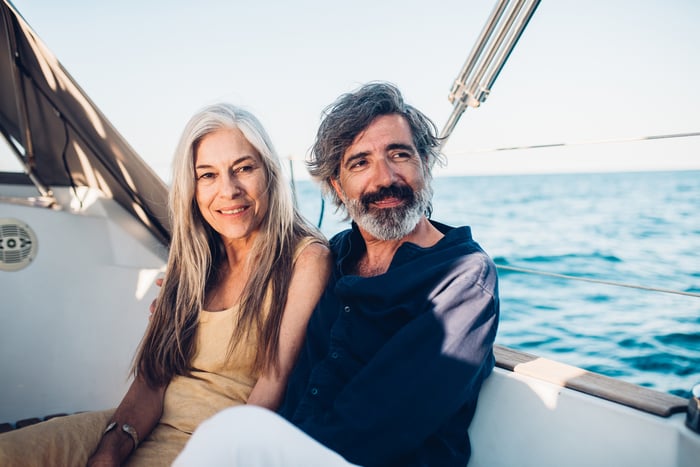 Shares of RH had soared more than 15% at midday on Thursday. The retailer's first-quarter financial results pointed to a huge recovery from last year's difficult times during the worst of the pandemic.

RH's numbers were impressive. Revenue soared 78% year over year, reversing last year's 19% drop and leaving RH with record sales that were far above their levels even from two years ago. Adjusted net income almost quintupled from year-ago levels, and adjusted earnings of $4.89 per share were far better than most of those following the stock had expected to see.

RH's strategy has been to build up a luxury brand that could support higher price markups to support more expansive profit margins. So far, the company is succeeding in its strategy, with adjusted operating margins topping those of other well-known luxury goods sellers. By avoiding fashion risk and seasonal inventory, RH can focus on what it does well, and its membership model avoids promotions and woos shoppers who will remain loyal to the company.

Based on its experience to start the year, RH boosted its guidance for the rest of 2021. With the retailer now expecting sales growth of 25% to 30% this year -- up from its previous outlook for just 15% to 20% top-line gains -- RH could continue to generate the impressive returns that shareholders have seen for a while now.

Why Embraer is flying

Meanwhile, shares of Embraer were up 13% today. Having just made a strategic decision to pursue an intriguing new product line, the Brazilian jet maker went in an unexpected direction that could produce an immediate payday for its shareholders.

Embraer has a subsidiary called Eve Urban Air Mobility Solutions, which is looking at developing aircraft that can take off and land vertically without runways to serve as air taxis. Last week, Embraer announced a deal to sell 200 of these aircraft to Halo, which will operate half the fleet in the U.S. and the other half in the U.K. market.

Yet today, Embraer said it's looking to give investors a chance to buy stock in the Eve subsidiary directly. Through negotiations with the special purpose acquisition company Zanite Acquisition (ZNTE), it's possible that a deal to take Eve public would open up access to ordinary investors interested in the space.

Investors shouldn't assume that a deal is imminent or will necessarily ever come to fruition. However, given the relative lack of ways in which investors can put their money to work in the air taxi space, a SPAC deal would be a great opportunity that could pay off for Embraer.

Why Geron, Restoration Hardware, and ImmunoGen Are Today's 3 Best Stocks