Earnings pointed to strong fundamentals for these two companies, and their stocks moved higher.

Investors remained nervous about the stock market on Thursday, trying to weigh the latest readings on the U.S. economy and decide whether market gains in 2020 reflected too much optimism about a potential recovery.

Testimony earlier in the week from officials at the Federal Reserve and the U.S. Treasury pointed to the possibility of overvalued stocks, and market participants were especially leery of some of the companies whose shares have jumped the most over the past year.

Yet even with the stock market falling sharply, there were still some bright spots among individual companies on Thursday morning. In particular, luxury retail stocks saw some sizable gains, as shareholders reacted favorably to the latest news from home furnishings company RH (RH 6.59%) and high-end watchmaker Movado Group (MOV 2.25%).

Shares of RH were up more than 3% late Thursday morning after having been up more than 7% earlier in the session. The company formerly known as Restoration Hardware has made an impressive rebound over the past decade, and its high-end strategic vision continued to pay off for investors during the just-ended holiday season.

RH's numbers for the fourth quarter of 2020 kept up the company's positive momentum. Revenue for the period climbed 22% compared to year-earlier levels, with the retailer's core demand figure climbing an even greater 36% year over year. Adjusted net income rose 57%, leading to a 36% rise in adjusted earnings per share for the quarter. Full-year 2020 results were similarly impressive, including an 8% rise in sales and a 53% gain in adjusted earnings per share.

CEO Gary Friedman remained optimistic. He highlighted improvements in gross margin as indicative of the strength of the RH brand, and he went into detail about his plans to create an entire ecosystem of luxury products and services that could dramatically expand the company's addressable market to gather in more opportunities to profit. RH expects to open new galleries in San Francisco; Dallas; Jacksonville, Florida, and the Chicago suburb of Oak Brook this year.

The company has been on a massive run, but its fundamentals have supported its growth. Many still see plenty of good times ahead for RH. 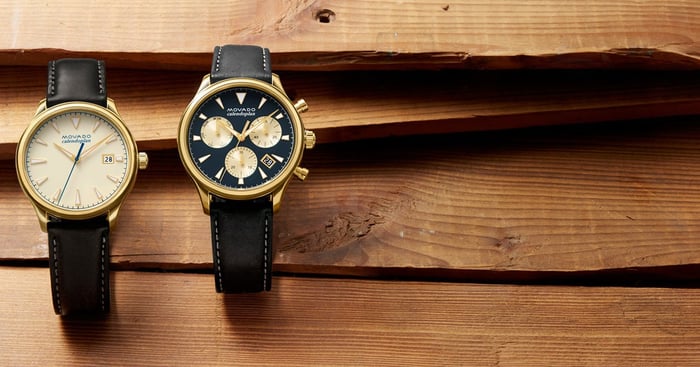 Shares of Movado Group did even better, rising 9% Thursday morning. The watchmaker's fourth-quarter financial results weren't quite as strong as RH's, but the numbers reassured investors who had expected worse from Movado.

Revenue fell 7% in the fourth quarter, reflecting what CEO Efraim Grinberg called "a challenging global operating environment." On the bright side, though, gross margins improved, and declines in operating expenses led to a more than fivefold rise in adjusted earnings per share. The fourth-quarter performance was good enough to give Movado a modest adjusted profit for the full fiscal year, although the roughly 40% drop on its bottom line reflected a huge 28% hit to revenue due to the pandemic throughout the year.

Movado also announced it would start a new stock buyback program, giving the company the ability to repurchase up to $25 million in shares. That's a modest amount, but it still represents a sign of confidence from Movado in its stock.

Taken together, gains for Movado and RH signal that investors are optimistic about luxury shoppers having the wherewithal to increase spending in 2021. If that pans out, it could send share prices for both luxury retailers higher.

These 2 Jet-Set Stocks Are Taking Off Thursday

Stock Markets Mixed as RH Soars Post-Earnings; Penney Gets a Lifeline (but Not Its Stock)
What to Know From Last Week: Restoration Hardware's Awesome Quarter, Lululemon's Brutal One, Oil Shocks, and the World Bank's Econ Outlook

Why Geron, Restoration Hardware, and ImmunoGen Are Today's 3 Best Stocks